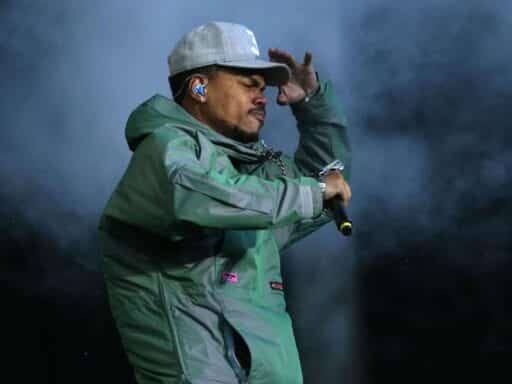 The rapper’s acquisition of the Chicago news website is cause for cautious optimism.

The trend of surprise music releases continues — and the latest one, from Chance the Rapper, comes with a particularly unexpected wrinkle.

After debunking rumors that he would be dropping a full album this week, Chance dropped four new songs at midnight on Wednesday: “Work Out,” “Wala Cam,” “I Might Need Security,” and “65th & Ingleside.” All four tracks contain references to the rapper’s Chicago background, including a call-out of Mayor Rahm Emanuel (“Rahm, you done, I’m expecting a resignation and open investigation on all these paid vacations for murderers”), and one of them, in the set’s biggest revelation, announces the news that Chance has acquired the news website Chicagoist.

The song “I Might Need Security” includes the lyric, “I bought the Chicagoist just to run you racist bitches outta business”; it refers to a Chicago Sun-Times opinion piece about his (since settled) child support dispute last year. Gothamist, whose parent company Gothamist LLC previously ran eight city-centric websites including Chicagoist, has confirmed that Chance’s company Social Media LLC has purchased the site — which has been dormant since its sudden shutdown in November 2017 — from WNYC, following the station’s acquisition of Gothamist LLC’s key assets earlier this year.

“I’m extremely excited to be continuing the work of the Chicagoist, an integral local platform for Chicago news, events and entertainment,” Chance said in a statement. “WNYC’s commitment to finding homes for the -ist brands, including Chicagoist, was an essential part of continuing the legacy and integrity of the site. I look forward to re-launching it and bringing the people of Chicago an independent media outlet focused on amplifying diverse voices and content.”

The reaction to Chance’s newfound status as a local media mogul has been mixed. On the positive side, in a statement released on Thursday morning, Laura Walker, president and CEO of New York Public Radio, of which WNYC is a part, said, “WNYC has a strong commitment to local journalism and building community, and we are pleased that these assets will be used to support local coverage in the great city of Chicago.”

Vanity Fair reported on the news by heralding Chance as “[saving] Chicago journalism,” citing his support of Chicago Public Schools, which he has long called on news outlets to cover. And Leigh Kunkel, a former Chicagoist contributor, was quoted by the Ringer as saying, “I think that Chance’s involvement will be an opportunity for an even more diverse set of stories to be covered.”

However, the sale of Chicagoist to Chance has also drawn some skepticism due to a past attempt to control how he is covered by the media. In 2016, after deeming an MTV News piece by critic David Turner to be “offensive,” Chance and his management threatened that they would no longer work with the company in any capacity. The piece was subsequently pulled from the site. (It is now available in full on Medium.) It’s not a history that bodes particularly well in relation to “I Might Need Security”’s declaration that he means to put another media outlet out of business.

What happens when Chicagoist wants to take unflinching looks at Obama or Kanye – prominent Chicagoans with deep connections to Chance – or Chance himself? Background: Chance once reportedly quashed a mildly critical review MTV ran of one of his concerts https://t.co/YaPh0goqhW

I want to be excited about Chance stuff, but still have a bad taste from when he pressured MTV to pull a negative review or else he’d never work with them again. Threatening honest journalism feels like it would be the opposite of what he stands for.

It isn’t yet clear when Chicagoist will be back up and running, nor when Chance will release a full follow-up to his 2016 album Coloring Book (2016) or a planned collaboration with Kanye West. All we can say for certain is that lots of people will be paying attention to the artist’s next move, whether it’s in music or media.

The Pentagon won’t check if US bombs killed kids in Yemen. CNN did it for them.
Iraqi Parliament approves a resolution on expelling US troops after Soleimani killing
Boris Johnson is making good on his Brexit plans
Live results for the June 2 primaries
4 primary races to watch in Pennsylvania
What to expect at the fourth Democratic debate