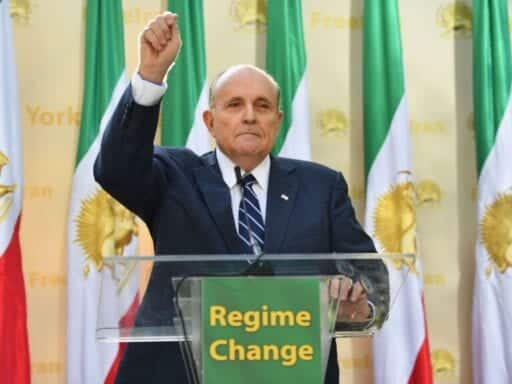 Share
Loading...
Giuliani speaks to the Organization of Iranian American Communities during their march to urge “recognition of the Iranian people’s right for regime change,” outside the United Nations Headquarters in New York on September 24, 2019. | Photo credit should read ANGELA WEISS/AFP via Getty Images

President Donald Trump and his Republican defenders in the House continue to argue there was no “quid pro quo” with Ukraine (despite a White House call summary and testimony from numerous Trump officials indicating otherwise).

It took Trump’s personal lawyer, Rudy Giuliani, all of two tweets to blast that talking point to smithereens.

On Thursday, Giuliani — apparently posting from somewhere in Kiev, where he’s currently traveling as part of his ongoing international effort to dig up dirt on the Bidens — posted tweets explicitly acknowledging a link between ongoing US assistance to Ukraine and investigations into the Biden family.

“The conversation about corruption in Ukraine was based on compelling evidence of criminal conduct by then VP Biden, in 2016, that has not been resolved and until it is will be a major obstacle … to the US assisting Ukraine with its anti-corruption reforms,” Giuliani claimed, despite the fact that no such evidence has emerged.

…to the US assisting Ukraine with its anti-corruption reforms.

The American people will learn that Biden & other Obama administration officials, contributed to the increased level of corruption in Ukraine between 2014 to 2016.

This evidence will all be released very soon.

Trump and his Republican supporters in Congress have sought to portray the efforts of the president and Giuliani to cajole the Ukrainian government into announcing investigations into the Bidens as being rooted in the president’s good-faith concerns about “corruption,” rather than his own political self-interests.

But Giuliani’s tweet reveals the hollowness of that talking point. “Corruption” is just a stand-in word for “Biden.” He doesn’t even try to hide it.

Even though Giuliani’s tweet gives up the game, White House spokesperson Hogan Gidley appeared on Fox News on Friday, still claiming that Trump “didn’t press [Ukrainian President Volodymyr] Zelensky on anything other than getting to the bottom of corruption in his country. We know that.”

HOGAN GIDLEY TODAY: Trump “didn’t press Zelensky on anything other than getting to the bottom of corruption in his country. We know that”

RUDY GIULIANI YESTERDAY: “The conversation about corruption in Ukraine was based on compelling evidence of criminal conduct by then VP Biden” pic.twitter.com/Vl3iyFitwx

But if Giuliani’s tweet isn’t enough to convince you otherwise, consider that the word “corruption” doesn’t appear even once in the summaries of the Trump-Zelensky calls released by the White House.

Of course, the notion that arguably the most personally corrupt president in American history ever had good-faith concerns about corruption abroad was hard to believe from the get-go — some might say as hard to believe as Attorney General William Barr’s claim that he couldn’t find an available room in the Washington, DC, area for his $30,000 holiday party anywhere other than the Trump International Hotel just blocks from the White House.

Yet that event is scheduled to take place this Sunday, even as Trump and his backers continue to insist that the president is, in fact, an anti-corruption crusader.

Trump’s bizarre Rose Garden news conference shows why he’s impossible to negotiate with
Why America doesn’t win wars anymore
Montana just voted to legalize marijuana
How Russian money and influence slipped through cracks in the US legal system
A key FDA vaccine committee declined to vote on a Covid-19 vaccine
Money Talks: This couple had 6 dogs. It got really expensive.

The best $1 I ever spent: A Venmo payment to my ex