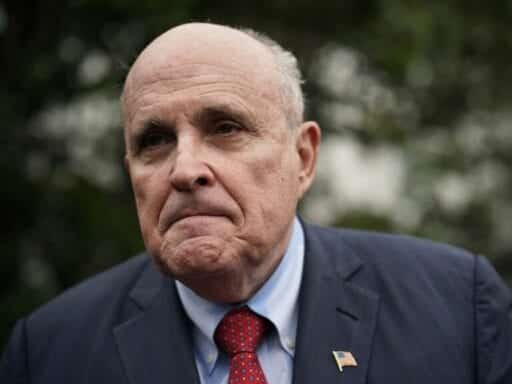 The aesthetics are textbook fascism.

Rudy Giuliani, President Trump’s lawyer and New York City mayor on 9/11, has hit on a curious way to commemorate the attack’s 18th anniversary: tweeting out a video that seems to fantasize about a patriotic cop beating up left-wing protesters.

It depicts a police officer in riot gear standing in front of a crowd of long-haired, sneering young people with lighters and signs about fascism (seemingly antifa stand-ins). As a haunting version of “America the Beautiful” plays, it tells us a little about the cop’s backstory — soldier, former football player, child glued to the TV during the 9/11 attacks. It ends with the cop taking out his baton, ready to fight back against the onrushing horde of flag-burning antifa members.

The video began life as, of all things, a clothing ad. Grunt Style, a clothing company founded by an ex-Army drill sergeant, originally produced the video as a potential Super Bowl ad (one it couldn’t afford to air).

Giuliani’s version, which may have originated elsewhere, strips out the company’s logo and repurposes the video as unadulterated agitprop.

In this context, the video is — and I don’t use this word lightly — fascist. It contains key hallmarks of actual fascist art identified by influential cultural critics, most notably the glorification of redemptive violence against the state’s enemies, and repurposes them in an American context. It’s the kind of political messaging that should worry all of us.

In 1936, German Jewish cultural critic Walter Benjamin wrote a famous essay titled “The Work of Art in the Age of Mechanical Reproduction.” Benjamin argued that the “logical outcome of fascism is an aestheticizing of political life,” that fascism invariably depends on rendering war and violence beautiful in order for the masses to identify with and support fascist aims.

Fascist art isn’t merely about celebrating violence in general, however; it’s about glorifying violence in the name of a particular set of values. In 1975, American cultural critic Susan Sontag identified some core values of fascist art in a New York Review of Books essay, including “the contrast between the clean and the impure, the incorruptible and the defiled, the physical and the mental, the joyful and the critical.”

The nation and its symbols represent purity, giving oneself over to its cause represents the best an individual can do. The nation’s enemies are the defilers who must be physically punished. A preoccupation of fascist art is the need for strong men to use force to protect the sacred nation from unclean forces that threaten to undermine it.

Benjamin and Sontag are not arguing that fascist art is aesthetically bad or uncompelling. On the contrary, both argue that it can be quite effective in part because it taps into the base human need for identity and community.

The Grunt Style ad is well made as a technical matter, in the way that Leni Riefenstahl’s films were. But its message embodies Benjamin’s definition: The protestors are depicted as monstrous America-haters who literally burn the flag. Good and true Americans — as symbolized by a soldier who witnessed 9/11 as a boy and played football, that most rah-rah sport — need to take out their batons and fight back.

Giuliani tweeting the video with the caption “God Bless America” is a way of reclaiming 9/11, which is supposed to be a solemn day of national unity, for one side of the culture war, attacking enemies not foreign but domestic. The implication is if you truly remember 9/11, you need to start fighting the right enemies — not the jihadists, but the leftists.

The Snyder Cut trailer shows off unseen Justice League footage and Darkseid
How polarization shaped Americans’ responses to coronavirus, in one chart
April 1 is Census Day. Here’s what that means.
How #SaveTheChildren is pulling American moms into QAnon
The top UN court ordered Myanmar to protect the Rohingya. An expert explains what it means.
Vaping is still safer than smoking. That message is getting dangerously muddled.