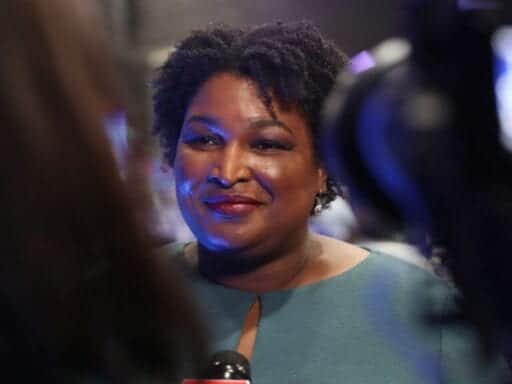 Abrams says she has the experience and temperament needed to be successful in the role.

Stacey Abrams, who rose to national prominence as the Democratic candidate for Georgia governor in 2018, made her case to be presumptive Democratic nominee Joe Biden’s running mate Sunday, arguing that her work advocating for voters’ rights — and her executive experience — make her perfectly suited to the role.

In appearances on NBC’s Meet the Press and CNN’s State of the Union Sunday, Abrams full-throatedly endorsed Biden’s bid for the White House, and explained why she has been openly campaigning to be the former vice president’s running mate while others reportedly under consideration have declined to do so.

“As a young black girl growing up in Mississippi, I learned that if I didn’t speak up for myself no one else would,” she said on Meet the Press. “I was raised to tell the truth, so when I’m asked a question, I answer it as directly and honestly as I can. So my mission is to say out loud, if I’m asked the question, yes, I would be willing to serve.”

WATCH: Former candidate for governor in Georgia Stacey Abrams says she would be ready to serve as Joe Biden’s vice presidential pick. #MTP @StaceyAbrams: “As a young black girl growing up in Mississippi, I learned that if I didn’t speak up for myself no one else would.” pic.twitter.com/OqwZVEiksf

On State of the Union, Abrams said she sees her campaign for the vice president role as being mostly about drawing attention to her qualifications, as well as the qualifications of other people of color.

“If you don’t raise your hand, people won’t see you and they won’t give you attention,” she said. “But it’s not about attention for being the running mate. It is about making sure my qualifications aren’t in question. Because they’re not just speaking to me, they’re speaking to young black women, young women of color, young people of color, who wonder if they too can be seen.”

Stacey Abrams on her ambitions to be Joe Biden’s running mate: “As a young black woman growing up in Mississippi, I learned that if you don’t raise your hand, people won’t see you and they won’t give you attention” https://t.co/q9q0Rkiy84 #CNNSOTU pic.twitter.com/pnUaHIXSuq

Abrams went on to list a number of those qualifications in her NBC appearance.

“For the last year and a half, I have run three national organizations including Fair Fight 2020, which is in 18 states protecting the right to vote,” Abrams said. “I’ve been traveling the country promoting a census that is accurate and that helps us prepare for the next pandemic and for redistricting. And I’ve been working to make certain that poor families, especially those in the South, but around the country, have the services they need.”

And prior to her gubernatorial run, Abrams served as her party’s minority leader in the Georgia House of Representatives. She is reportedly on Biden’s list of potential vice presidential candidates — and he has said he will select a woman for his running mate. There is pressure from certain Democratic corners for Biden to select Abrams, particularly among black Democrats. She was among the women Rep. James Clyburn — who is credited with Biden’s primary win in South Carolina — named when asked who he believes Biden should choose, and Rev. Al Sharpton is expected to endorse her specifically.

Despite this, Abrams said Sunday she does not think of herself as having secured the position, noting Biden “has no shortage of good candidates to choose from.”

As Vox’s Ella Nilsen has reported, Biden will have many considerations to take into account when making his selection. His political calculations include finding someone with whom he is ideologically aligned, and who can help him appeal to certain voter groups. For example, as Nilsen writes, some advisers are publicly pushing Biden to select a woman of color, in part because voters of color, and especially black women, are stalwart Democratic voters.

There remains an open question regarding how important a veep pick actually is — particularly during such a contested election year, and especially in the midst of a pandemic that upended the race entirely. But Biden, who, at 77, would be the oldest first-term president ever, has signaled he is actively looking for someone who would fit in well in the Oval Office.

“The most important thing is that there has to be someone who, the day after they’re picked, is prepared to be president of the United States of America if something happened,” Biden has said.