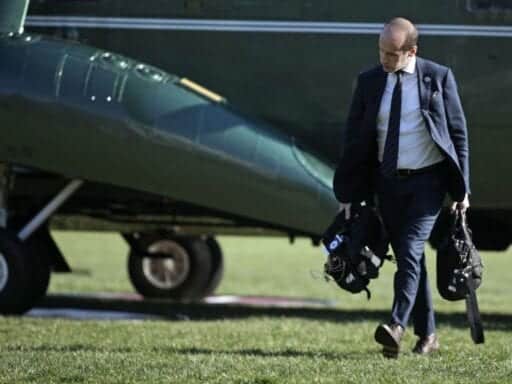 Heckling of Trump officials in Washington, DC, adds a new chapter to the civility debate.

Life for Stephen Miller in Washington, DC, could be better. The policy adviser to President Donald Trump and major proponent of the president’s anti-immigration policies has been subject to taunting on the street and “Wanted” posters around his apartment building. He got so upset when a man cursed at him one evening that he threw his own $80 sushi dinner in the trash.

Miller, 32, is one of the Trump officials whose experiences of public taunting and heckling were outlined in a report from Paul Schwartzman and Josh Dawsey at the Washington Post on Monday. The story outlines how figures such as Kellyanne Conway, Steve Bannon, Kirstjen Nielsen, and Sean Spicer have faced blowback in public spaces while living in Washington, DC.

Miller, who is one of the driving forces behind President Trump’s “zero tolerance” immigration policies, has had perhaps an especially tough time. Per the Post:

One night, after Miller ordered $80 of takeout sushi from a restaurant near his apartment, a bartender followed him into the street and shouted, “Stephen!” When Miller turned around, the bartender raised both middle fingers and cursed at him, according to an account Miller has shared with White House colleagues.

Outraged, Miller threw the sushi away, he later told his colleagues.

He’s not the only one mentioned, though the others seem not to have had the same sushi-self-sabotaging reaction.

Nielsen, the Homeland Security secretary, was met with cries of “Shame!” while she dined at a Mexican restaurant in the midst of the family separation crisis in June. A woman at a bookstore in Virginia called Bannon, Trump’s former strategist, a “piece of trash.” (The owner called the police on her.) Press secretary Sarah Sanders was asked to leave a Virginia restaurant by the owner last month.

Spicer, the former White House press secretary, told the Post he stays in a lot more than he used to in order to avoid dealing with strangers, whether they’re friendly or not.

From Stephen Miller’s sushi to the debate about civility

The Post’s Monday story on the trials and tribulations of daily life for Trump officials in Washington, DC, adds a new fold to the ongoing debate about civility and how members of the administration do and do not deserve to be treated in public.

Its practice of separating migrant families at the border, now paused, brought the public outrage around Trump’s policies to a new level. It coincided with Sanders being asked to leave the Red Hen restaurant in June and heckling of Nielsen and Miller, who was called a “fascist” at a Mexican eatery.

The Washington Post’s editorial board in June called for a return to civility and letting Sanders, Nielsen, and Miller “eat dinner in peace.” The board wrote, “Those who are insisting that we are in a special moment justifying incivility should think for a moment how many Americans might find their own special moment,” warning of a road ahead “in which only the most zealous sign up for public service.”

As Vox’s Zach Beauchamp recently pointed out, this insistence on “civility” toward Trump administration officials misses the point of American politics:

American politics are uncivil — and have been long before Sanders sat down for dinner [in June]. And at the moment, this incivility is mainly coming from the White House. The Trump administration has flouted the norms of political discourse far more often than any of its opponents.

In other words, Stephen Miller is aligning himself with plenty of “uncivil” policies from the White House — separating children from parents, persistent lies, and so forth — that draw a reaction from the public. Public protest is the American way, and he doesn’t have to throw out his own sushi over it.

Perhaps he could take a cue from Conway, counselor to the president, who largely brushes aside public pushback. In an interview with the Post, she described when a man in a supermarket told her to “go look in a mirror” because she should be ashamed of herself. “What am I gonna do? Fall apart in the canned vegetable aisle?” she said.

On Instagram, there’s an influencer for everything. Even pumpkins.
A Parkland survivor is teaming up with a top gamer and NFL player to raise money for Jacksonville vi...
Trump’s argument about “Joe Biden’s America” is undercut by the fact that he’s in charge
Top Democrat: Bolton urged me to look into Trump’s ouster of Yovanovitch
In this joyous fantasy novel, books and art are the key to cheating death
Game of Thrones season 8 might not air until 2019