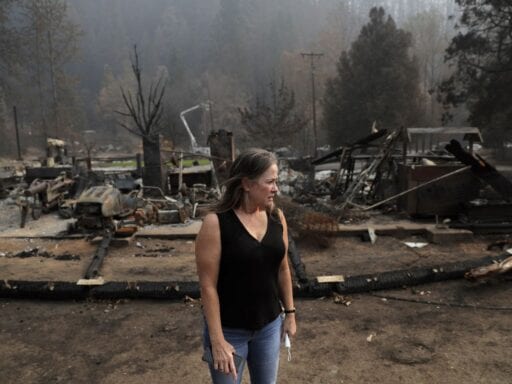 Share
Loading...
Erin Hillman, a member of the Karuk Tribe, takes in the damage done to her home by the Slater fire in Happy Camp, California, on September 30, 2020. | Carlos Avila Gonzalez/San Francisco Chronicle/Getty Images

The state has yet to reckon with its colonial past and the environmental injustices it wrought.

It is not hyperbolic to describe the 2020 fire season as historically catastrophic. Records for both the largest wildfire and the total number of acres burned in California have already been shattered this year, according to a Los Angeles Times analysis, and the past decade’s fire seasons have been demonstrably larger and more intense than the decade before it. The pictures of smoke choking the sun from San Francisco, of fires ripping through the exurban and suburban West are not an aberration; they’re the future.

The causes of today’s wildfires are complex. There is no doubt that global climate change is changing the intensity, size, and duration of wildfires in California. But the fires have ties to the historical and social injustices done to Indigenous peoples — genocide, slavery, the destroying of cultural rites — which have led to the mismanagement and overdevelopment of California lands.

Now, in such a dire fire season, the state has invested new resources into Indigenous fire management techniques, like controlled burning. But this begs the question: How do Indigenous peoples in California feel about being asked to use their cultural practices to help a state that has largely sought to erase them?

The Indigenous scholars I talked to stressed that their communities have always burned as part of their culture — and yet many are still not in control of their own lands because of California’s long history of colonialism. The way forward, many say, is not just for the state to incorporate Indigenous practices but to understand their importance in the culture and reckon with this history.

With wildfires out of control around the world, there has been much discussion about Indigenous fire practices in recent years. A recent executive order signed by California governor Gavin Newsom included the use of prescribed or controlled burning — planned fires for forest restoration — as a strategy to conserve land in the fight against climate change. Cal Fire and the Forest Service also signed a pact earlier this year to increase the use of controlled burning, according to the San Francisco Chronicle.

But tribes like the Karuk in Northern California have been pushing for the state to incorporate these practices — as well as tree thinning, native seed restoration, and others — for years. The US government’s historically aggressive response to extinguishing wildfires has led to overgrown forests and debris, which has made wildfires worse. Indigenous fire practices would help both to mend and prevent such devastation. Traditionally, the role of prescribed burning has been to balance the ecosystem.

“We utilized the resources of our lands…things like fire to help produce more trees, to cut down the amount of brush, so you wouldn’t have these massive fires that you see today,” said Charles Sepulveda (Tongva/Acjachemen), assistant professor of ethnic studies at the University of Utah.

All this changed with colonization. The establishment of Southern California as a Spanish colony in 1769 presaged not only discrimination toward Indigenous fire practices, Sepulveda said, but genocide and slavery. “California Indians were enslaved under the mission system,” he said, “think about it in those terms — you don’t have the independence to produce the things that were important to your culture and your society.”

In this system, the ability of California’s Indigenous peoples to maintain traditional knowledge was also largely destroyed. “During this time, there are increased mortality rates…so the people responsible for a lot of those things within tribal communities, tribal nations were no longer able to practice their ways of life,” Sepulveda said.

While the Spanish mission system did not extend throughout the entirety of California, the realities of genocide and slavery are constant in the histories of California’s Indigenous peoples. As Cutcha Risling Baldy (Hoopa Valley/Yurok/Karuk), associate professor and department chair of Native American studies at Humboldt State University, explains, many Native nations were faced with complete devastation in the wake of the California Gold Rush in the mid-1800s.

In particular, two laws — the 1850 Act for the Government and Protection of Indians and the California Volunteer Act — sought to effectively legalize the bounty of Native peoples and enslave those who survived, including children. Over 20,000 Indigenous peoples were enslaved during California’s first years as a state.

“People are fighting for their lives during this period of time, and then they’re also having to worry about the laws being passed to prevent them from going off the reservation, from utilizing land in certain ways,” said Risling Baldy.

Nearly 200 years later, these laws still matter deeply to Native communities in Northern California. “There’s actually a lot of people in California today that trace their land rights…back to the Gold Rush,” said Risling Baldy. “They have deeds from their families that are from 1849.”

California needs to reckon with its history

The extent to which California has reckoned with its history has so far largely been symbolic. While Gov. Gavin Newsom formally apologized in 2019, the executive action taken so far has been to establish a state-level Truth and Healing Council between tribal, state, and local leaders. For many Indigenous communities, the idea of truth and healing is complex. Many Native communities remain effectively disenfranchised from their own homelands, leaving many seeking restitution or reparations for basic access to the land and the resources on it. This lack of access also plays into structural issues that Indigenous peoples face across the country, including high rates of poverty, health care inequality, and intergenerational trauma.

Almost all of the Indigenous experts I talked to noted that Indigenous fire practices grow out of larger ideas about a reciprocal relationship with the environment — a relationship that is innately tied to their health and wellbeing. In many ways, this philosophy is antithetical to the historical memory that is the American West. The idea that we might listen to the environs around us, and that the plants and animals might ask something of us, is conflicting at best, heretical at worst.

So if California wants to incorporate Indigenous fire practices, then that means grappling with the history of its Indigenous people. Indigenous communities can also facilitate a conversation about how fire practices can be a part of a larger cultural shift that values Indigenous lands and peoples.

For example, unrecognized tribes in Oakland have instituted a volunteer land tax for local residents and businesses to pay as a show of thanks for being hosted on their homelands, money that goes to replenishing the land with fruit and vegetation. Federally recognized tribes, meanwhile, can ask to have their land put into trust, which would essentially put it under tribal jurisdiction. As for California, the most actionable step the state can take is to facilitate a return of the land.

Rory Taylor is a Ckiri/Chahta journalist covering Indigenous politics, policy, and culture. He currently lives on the territory of Ngāti Whātua Orākei in Tāmaki Makaurau, where he is pursuing a master’s degree in Indigenous studies at Te Whare Wānanga o Tāmaki Makaurau.

5 winners and 3 losers from the vice presidential debate
Trump vents about impeachment in wild letter to Nancy Pelosi
Joe Biden gives Democrats a chance to finish the work of Obamacare
“This dynamic is immortal:” Why OK boomer is much more complicated than the meme
Trump’s agreements in Central America could dismantle the asylum system as we know it
Exclusive: Nobel laureate Joseph Stiglitz on how to fix the economy during and after the pandemic

The best $294 I ever spent: Getting my hair braided