The reason carry-on luggage became such a hassle 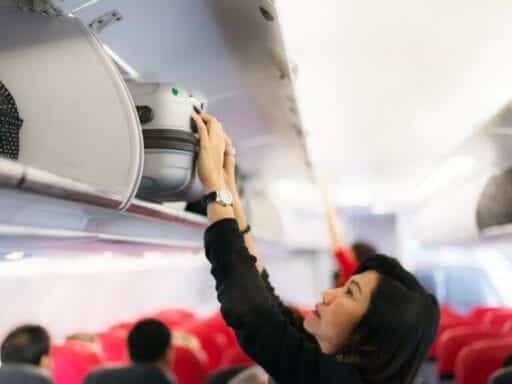 Airlines are adding more overhead space, but it probably won’t make much of a difference.

The state of carrying on your luggage when you fly is dismal. Fellow airline passengers are always antsy to get ahead in line, to board early before the overhead bins fill up. After all, no one wants to be the unlucky person stuck rearranging suitcases to fit their own.

Personally, I prefer checking my bag at the gate (for free!) — a last-minute move that releases me from the stress of searching for overhead space on a crowded flight. Most of my colleagues (and certainly other travelers) feel differently; they’d rather not risk parting with their possessions or spending extra time after arrival waiting for baggage claim.

No matter your preference, it’s clear to anyone who’s ever been on a plane that there’s very little space available. Unless you’re in first class or have early boarding privileges, there’s always the added pressure to beat the crowd. It seems that airlines have finally found the no-brainer solution — adding more space.

In October, United was the latest airline to announce that it will install larger overhead bins on its main fleet by 2023. (United’s move follows similar upgrades from Alaska, American, and Delta, which recently incorporated larger compartments into their domestic flights.)

As with many travel-related perks, there’s a caveat: More overhead space doesn’t necessarily mean you’re ensured significantly more space for your things. Despite what airlines probably want you to believe, motivation to add compartment space isn’t solely driven by improving customer experience. (If it was, then carriers’ priority should definitely be to add more legroom and seat space.)

Adding more room for luggage increases boarding efficiency, since carriers lose money for every minute a plane doesn’t leave on time. Airlines care about their bottom lines — a focus that has resulted in the industry standard of nickel-and-diming customers over different travel fees. Luggage space just happens to be the latest area in which airlines can optimize for more efficiency and, consequently, more money.

How carry-on culture got so chaotic

About a decade ago, before the era of inescapable travel fees, a plane ticket used to include at least one free piece of checked luggage. That changed in 2008, when American Airlines introduced a $15 fee for passengers’ first checked bag, two weeks after other major carriers started charging $25 for checking a second bag. Bag fees soon became standard and have steadily increased over the years, with some airlines now demanding $25 to $30 for the first checked bag on a domestic flight. It only gets pricier from there: Second checked bags are about $40, while third bags are almost always $100.

That has prompted travelers to try and avoid bag fees altogether, by squishing more in their suitcases and carrying them on. In recent years, airlines have tried to offset the luggage frenzy by asking fliers to check their bags at the gate, sometimes even before the boarding process begins.

As Aditi Shrikant previously reported for The Goods, airlines’ biggest problem with carry-on bags has more to do with time than with space. More carry-on bags mean that more people are hunting for room on a given plane, which often entails moving past their own row or stopping for long swathes of time.

A gate agent at Dallas/Fort Worth International Airport told Shrikant that at American Airlines, agents are allotted 20 minutes for boarding. If they go past that time, they could be penalized or fired — departure delays are publicly reported, and an airline’s metrics are measured by on-time performance.

“We’re losing precious minutes over these minute actions,” travel writer Gary Leff, author of the blog View from the Wing, told me. “Gate agents who want to avoid the last-minute rush will proactively require passengers to gate-check bags before the bins are full, but it’s bad customer experience when fliers see that there’s still space.”

Larger overhead compartments will take the pressure off the gate agents calling these shots. United’s new bins will accommodate one bag per flier, according to its chief customer officer, which ideally ensures that no passenger has to check their luggage at the last minute. In theory, this will make the boarding process easier, but it’s hard to imagine people will stop stuffing mid-sized objects, like briefcases or coats, into overhead storage.

People who put their coats in the overhead bins are real jerks.

If the flight attendants say a flight is full and you take up precious overhead bin space with a coat and a hat, you are a bad person

Why travel fees are here to stay

Even with more space, airlines aren’t likely to change their carry-on requirements (Alaska and Virgin America recently reduced its carry-on size by 32 percent). Instead, it makes sense that carriers would capitalize on these roomier bins. This is in line with airlines’ tendency to “unbundle” their services, Leff said.

They’ve put premiums on seat selection and priority boarding (which helps when it comes to claiming bin space), and many have introduced a stripped-down fare option called “basic economy,” which requires passengers to board last and charges them even for a carry-on bag. (Delta first offered basic economy for select flights in 2012 and expanded the option in 2014. United and American widely adopted the model in 2017.)

Delta recently introduced an annual $59 subscription service that offers travelers eight drink vouchers and the opportunity to board with Main Cabin 1 (which is, counterintuitively, the fourth group to board). Southwest is an outlier; it’s one of the few remaining carriers that don’t charge for travelers’ first two checked bags, which means there’s less of an incentive to travel solely with a carry-on.

Carriers have latched onto travel fees as a way to bring in more revenue and avoid the 7 percent excise tax on airfare. Domestic flights are subject to the tax, but any services considered optional (additional luggage, seat selection, priority boarding) are exempt.

Last year, US airlines brought in more than $4.9 billion in checked-bag fees (a record they’re set to break in 2019). Those are big numbers, Leff said, but they don’t show the entire picture. In a September article for Forbes, Leff wrote that ticket prices have fallen as checked-bag fees rise. It might not seem like it, but on average, the total cost of a trip (airfare and travel fees) is no higher today than when the checked-bag fee was first introduced in 2008, according to Leff.

“The question of ‘Why raise this fee?’ is not different than ‘Why have it in the first place?’” Leff told me. “These fees do come at the cost of operational efficiency, but airlines think they’re going to make more money by raising them.”