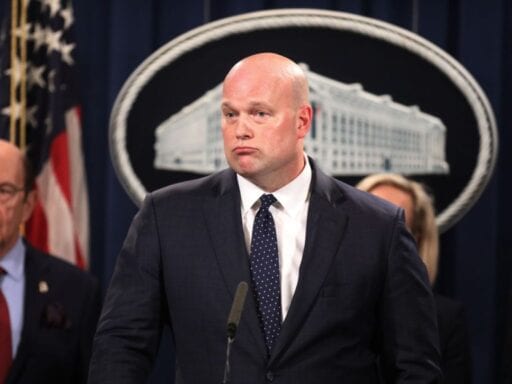 The House Judiciary chairman assured Whitaker that he won’t issue a subpoena — as long as the acting attorney general shows up to testify.

It’s the latest installment in a day of drama between House Democrats and the Department of Justice that has thrown Whitaker’s upcoming Congressional appearance into doubt.

If the hearing does move forward as planned, it’s probably going to be a contentious affair. Democrats on the House Judiciary Committee have a lot of questions for Whitaker; the hearing on Friday was set to be the first high-profile oversight hearing into the Trump administration since Democrats retook the majority.

But things got complicated on Thursday, after the House Judiciary Committee authorized a subpoena for Whitaker, which Chair Rep. Jerrold Nadler (D-NY) said he would use only if Whitaker refused to answer the committee’s questions.

But Whitaker fired back, saying through a letter from the Justice Department that he would not testify at all if the committee issued a subpoena. The DOJ demanded a response, in writing, by 6 pm Thursday.

Nadler offered his brief response shortly before the 6 pm deadline, reassuring Whitaker that if he appeared before the committee, “then … there will be no need for the Committee to issue a subpoena on or before Friday.” In other words, Nadler isn’t withdrawing his subpoena threat — he’s just reiterating that he’d prefer not to use it.

My response to Acting AG Whitaker regarding the use of a subpoena for tomorrow’s @HouseJudiciary hearing. pic.twitter.com/x6whDtaVX8

Nadler added that the committee would handle Whitaker’s concerns over specific questions “on a case-by-case basis.”

Nadler’s response seems to be an attempt to de-escalate the confrontation between the DOJ and Whitaker, but he’s not completely backing down. How Whitaker responds to Nadler’s letter will likely determine whether the hearing happens on Friday or not.

Democrats have long wanted to interview Whitaker. He took over the Justice Department as acting attorney general after President Donald Trump forced out Jeff Sessions in November. The move stirred up a slew of controversy, as Whitaker had publicly criticized the Mueller investigation into Russian interference in the 2016 election before joining the DOJ, and Trump bypassed the DOJ’s order of succession to appoint Whitaker to the job.

Democrats pushed for Whitaker to recuse himself from the Mueller investigation, but he declined to do so. Many feared Whitaker would try to curtail the Russia probe, though so far, those concerns appear unfounded — just look at the Mueller plea with former Trump attorney Michael Cohen and the charges against longtime Trump associate Roger Stone, both of which happened after Whitaker took over.

But Democrats still want to find out how — and why — Whitaker was appointed, and what conversations he’s had with the White House before and during his time as acting attorney general about the Mueller investigation. And they’re clearly prepared to use subpoena power if Whitaker doesn’t cooperate.

Why Whitaker was called to testify before the House Judiciary Committee

Nadler promised shortly after the midterms that Whitaker would be among the committee’s first witnesses when Democrats reclaimed the majority. He’s followed through, and has made public multiple letters between himself and Whitaker ahead of the hearing date.

On January 22, Nadler sent a letter to Whitaker detailing questions the committee planned to ask, including what conversations Whitaker may have had with the White House, including with the president himself, about replacing Sessions; why Whitaker declined to recuse himself from the Mueller probe; whether Whitaker has been briefed on the special counsel’s investigation; and whether he communicated any of that information to Trump or others in the White House.

The committee also had planned to ask if Trump contacted Whitaker after Cohen, Trump’s former attorney, pleaded guilty in November 2018 for lying to Congress about the timeline of the Trump Tower Moscow project, or federal prosecutors in the Southern District of New York identified Trump as “Individual 1” in a Cohen court filing in December. Nadler also wanted to know if Trump had expressed frustration, or had pressured Whitaker to involve himself to fire personnel prosecutors in the Southern District.

Democrats also planned to ask Whitaker about the rare statement Mueller’s office gave discrediting parts of a BuzzFeed story in January that alleged prosecutors had documentation that Trump had ordered Cohen to lie to Congress. Lawmakers want to know if Whitaker talked to the White House about the report or the decision of the special counsel’s office to respond. (Read the full list of questions the House Judiciary Committee plans to ask Whitaker here.)

Democrats clearly want to know whether Trump installed Whitaker as acting attorney general with the goal of reining in the Mueller probe and other federal investigations into Trump and his associates. (Before Whitaker became acting AG, the New York Times had reported that the White House considered him their “eyes and ears” inside the Justice Department.) Whitaker’s appointment also raised a lot of other thorny questions — ethics questions over his role with a sketchy business and legal issues over the legitimacy of his appointment.

Those don’t seem like they’ll play a very big role at this hearing, if it happens, because Whitaker’s days in his current job are dwindling. The Senate Judiciary Committee advanced Trump’s permanent nominee for attorney general, Bill Barr, on Thursday, with the Senate likely voting to confirm next week. Given this, the goal seems to be to find out what Whitaker has been up to for the past few months regarding Mueller’s probe.

Republicans, freshly in the minority, would also get the chance to interview Whitaker. The committee contains many allies of the president and longtime critics of the Russia probe, including Rep. Jim Jordan (R-OH), who led the conservative charge against Deputy Attorney General Rod Rosenstein and has echoed the president’s call that the Russia investigation is a “witch hunt.”

They’ll likely ask questions to try to shore up Whitaker, and the president, and try to cast suspicion on the actions of the FBI, Justice Department, and Mueller throughout the investigation.

It’s likely that Friday’s hearing, which is supposed to begin at 9:30 am ET (live stream link here), will be a fiercely partisan affair — if it actually takes place.

Democrats wanted to be able to subpoena Whitaker in case he didn’t comply. Then Whitaker threatened to skip the hearing altogether.

Whitaker had originally accepted the committee’s request to testify, but then the DOJ tried to delay until mid- or late February, citing the shutdown or Whitaker’s schedule. The goal appeared to be an attempt to stall until Barr had been confirmed as attorney general and took over the Mueller probe — which would make Whitaker’s testimony a lot less compelling and relevant.

But a hearing date was finally agreed to on February 8, and Nadler followed up with the committee’s questions in the January 22 letter mentioned above. In it, Nadler said he was providing the questions in advance because “some of these questions may conceivably implicate executive privilege.”

Nadler said that if Trump plans to invoke executive privilege — basically, using his right to withhold information from Congress — in a way that would prevent Whitaker from answering these specific questions, Whitaker should notify the committee in writing “no later than 48 hours in advance of the hearing.”

But Nadler also didn’t want Whitaker to dodge questions, so he warned Whitaker that if the committee did not get advance notice from Whitaker, he couldn’t refuse to answer questions during the hearing on the basis that Trump might want to invoke executive privilege sometime in the future. “Short of direct and appropriate invocation of executive privilege, I will expect you to answer these questions fully and to the best of your knowledge,” Nadler wrote.

Nadler held Whitaker to the deadline. On Tuesday, the Congress member scheduled a markup for a potential subpoena — which would compel Whitaker to testify — by the House Judiciary Committee out of an “abundance of caution.”

And on Wednesday, when Whitaker apparently missed the deadline, Nadler sent a letter to the acting attorney general basically alerting him that he’d be expected to provide “full and complete answers” on Friday, writing:

You have now had more than two weeks to engage in any necessary consultations with White House Counsel and the President. Because you have not provided any notification to the Committee regarding executive privilege — or, indeed, any communication in response to the January 22 letter — my understanding is that you will provide full and complete answers to these questions when they are asked at your hearing this Friday.

But Nadler isn’t taking any chances. Democrats on the House Committee authorized a subpoena for Whitaker in case he doesn’t show up or refuses to answer questions during the hearing. The committee hasn’t actually issued a subpoena; it’s just a resolution that authorizes a subpoena in case Whitaker tries to evade or avoid testifying.

Democrats wanted to show Whitaker — and, by extension, the Trump administration — that they’re serious about using their investigative powers and they’re willing to compel testimony if necessary. Democrats also authorized the subpoena through a committee markup, which allows both Democrats and Republicans to debate and weigh in, rather than Nadler unilaterally issuing a subpoena without consulting his committee members on both sides of the aisle.

Still, Republicans strongly object to the resolution. Ranking member Rep. Doug Collins (R-GA) called it “political theater,” and other GOP lawmakers called the resolution an overreach since Whitaker had agreed to testify voluntarily. Rep. Andy Biggs (R-AZ) tried to add an amendment to authorize a subpoena for deputy Attorney General Rosenstein, too (though he wasn’t scheduled to testify), under the argument that if Democrats wanted to find out about the Mueller probe, they had to talk to the deputy AG. Democrats defeated that amendment on party lines.

Democrats wanted to authorize the subpoena as an option of last resort — but it may have backfired. The DOJ responded with its own letter after the committee vote, saying Whitaker would refuse to appear for the hearing on Friday if the House Judiciary Committee issued a subpoena. The DOJ demanded a response, in writing, by 6 pm Thursday that Democrats would stand down.

The letter, which was signed by Assistant Attorney General Stephen Boyd, also objected to Nadler’s January 22 request of getting advance warning on questions of executive privilege. Boyd indicated that Whitaker would not answer questions about communications between him and the president — and that it would inappropriate for Congress to make this request before the Committee even asked its questions.

The DOJ did say, however, that Whitaker would answer questions about how the DOJ has “discharged his responsibilities” during his tenure, and would testify that “at no time did the White House ask for, or did the Acting Attorney provide, any promises or commitments concerning the special counsel’s investigation.” It also said Whitaker would respond to questions about his decision not recuse himself from the Mueller probe.

Again, Nadler responded to the DOJ shortly before 6pm on Thursday, saying that the committee would handle Whitaker’s concerns about specific questions “on a case by case basis.” But Nadler did not agree to withdraw the threat of a subpoena — it’s still there if Whitaker doesn’t show up on Friday.

If Nadler issues a subpoena, the hearing definitely won’t happen on Friday — and it could mean a potential court battle that would delay Whitaker’s testimony for weeks, if not months. That would almost certainly happen after Barr assumes the role of attorney general, and it would make Whitaker’s hearing far less compelling — and potentially allow him to escape some scrutiny about his recusal decisions, presidential conversations, and more.

No matter how this plays out, the last-minute clash between the DOJ and the House Judiciary Committee is almost certainly a very early preview of the battles to come between House Democrats and the Trump administration in the next two years.