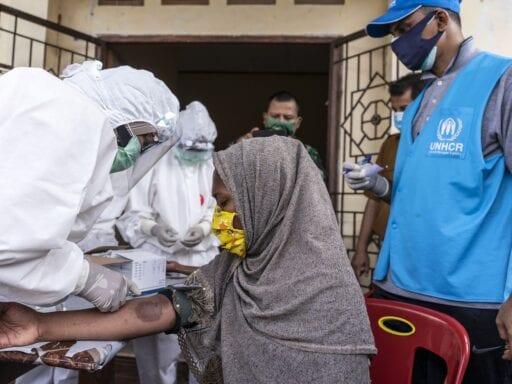 Share
Loading...
Rohingya refugees undergo rapid tests for Covid-19 after being transferred to a temporary shelter in Lhokseumawe, Indonesia, on September 7. | Zick Maulana/NurPhoto via Getty Images

The US will only accept up to 15,000 refugees in the coming year — a record low.

Just minutes before a midnight deadline, the Trump administration announced Wednesday that it would only accept up to 15,000 refugees over the next year — the lowest number in since the refugee program was created in 1980 and down from last year’s cap of 18,000.

It’s another blow to the US’s already decimated refugee program, despite the fact that the coronavirus pandemic has only made the plight of the world’s most vulnerable populations more urgent. There are now more refugees, asylum seekers, and internally displaced people today than at any time since World War II, and those numbers are only growing given ongoing crises in Hong Kong, Syria, Venezuela, and other countries.

Refugee advocates had consequently pushed the administration to adopt at least a 95,000 cap on refugee admissions, the average annual resettlement goal before Trump took office, but still lower than the cap of 110,000 under the Obama administration. That didn’t come to pass.

“Let this serve as a wake-up call to those who believe this administration supports avenues of legal immigration,” Krish O’Mara Vignarajah, president and CEO of Lutheran Immigration and Refugee Services, said. “Refugees go through extreme vetting and have done everything our government has asked of them, yet they continue to be met with open hostility and egregious processing delays from this administration.”

The administration said in its announcement that it also plans to take in more than 290,000 asylum seekers, which it sought to equate with refugees. But the two categories are distinct.

Migrants can apply for asylum only after they have arrived in the US or at the border and if their claim is found to be valid, the US is under obligation to offer them protection. There is no limit on how many asylees the US accepts in a given year. Refugees, on the other hand, are typically processed by humanitarian agencies abroad and sent to the US for resettlement.

Last year, delays in the announcement of the refugee cap resulted in a one-month halt to admissions that left many refugees who were already in the resettlement pipeline stranded abroad. Combined with a five-month pause on refugee resettlement amid the pandemic, that has meant that the administration has only resettled 11,814 refugees over the last fiscal year, which ended on September 30.

Joe Biden, the party’s presidential nominee, has pledged to take in up to 125,000 refugees in the year after he takes office and increase admissions “commensurate with our responsibility, our values and the unprecedented global need.”

Rep. Zoe Lofgren (D-CA) voiced her support for that agenda in a press call on last month, saying: “I’m hopeful that come January, we will have a new administration that recognizes the value and importance of refugees, and the value and importance of the United States leadership in welcoming these individuals to our country — in the United States standing for freedom, once again being a beacon of hope and freedom around the world.”

The refugee program has historically flourished under Republican presidents. Even in previous Republican administrations seeking to curtail immigration, no one has ever set the cap on refugee admissions as low as Trump has. Former President George W. Bush briefly cut the number of refugees admitted after the 9/11 attacks, but even then the limit was set at 70,000.

But the bipartisan consensus on maintaining a robust refugee resettlement program began to unravel after the Paris terror attacks in late 2015, said Yael Schacher, senior US advocate for Refugees International, when suicide bombers — reportedly sanctioned by the Islamic State — killed 130 civilians in explosions and mass shootings throughout the city.

There was speculation that one of the attackers was a refugee, one of 5.6 million Syrians who have been displaced since 2011 by the still-ongoing civil war. It was later confirmed that all of the perpetrators were citizens of the European Union. But the rumors were enough to spark a panic about Syrian refugees and start a movement at the state level to cut back US admissions of Syrian refugees and resettlement efforts more broadly.

Governors from 31 states, all Republican but for New Hampshire’s Maggie Hassan, said in 2015 that they no longer wanted their state to take in Syrian refugees. In 2016, Mike Pence, then the governor of Indiana, also tried to prevent refugee resettlement agencies in his state from getting reimbursed for the cost of providing social services to Syrian refugees.

But states didn’t have the legal authority to simply refuse refugees; that’s the prerogative of the federal government. Pence ultimately had to back down after a federal court ruled against his decision to withhold the reimbursements.

State leaders lined up behind him: The Tennessee legislature, for instance, filed a lawsuit in March 2017 claiming that the federal government was infringing on states’ rights by forcing them to take in refugees (a court challenge that also failed).

In September 2019, Trump also issued an executive order that allowed local governments that do not have the resources to support refugees in becoming “self-sufficient and free from long-term dependence on public assistance” to turn them away. Texas Gov. Greg Abbott later announced that the state would no longer resettle refugees under the executive order. Courts have prevented that executive order from going into effect for now, but it’s possible that the case could eventually make its way to the US Supreme Court.

If Trump’s executive order is permitted to go into effect, it’s not clear how it would play out in practice. States won’t just be able to refuse refugees from certain nations, such as Syria, Stephen Yale-Loehr, a professor at Cornell Law, said. Immigration law provides that state and local governments must provide aid “without regard to race, religion, nationality, sex or political opinion.”

But it could prove complicated when states and municipalities disagree over whether to accept refugees. It’s possible that states will be able to override local governments. Take, for example, cities like Dallas, which has historically taken in many refugees but is located in Texas, which has sought to reject them.

The executive order would also create inconsistent refugee policies across the country, making it next to impossible for the federal government to properly plan for refugee settlement, Schacher said.

Vox Sentences: California vs. carmakers
Surprise! UnReal’s 4th and final season is now streaming on Hulu
We asked 5 senators what they’re looking for in Christine Blasey Ford’s testimony
Trump won’t rule out that his business will benefit from emergency coronavirus legislation
Ousted whistleblower warns US is heading toward “darkest winter in modern history”
Cary Joji Fukunaga is directing the new James Bond movie. Here are 3 things to know about him.