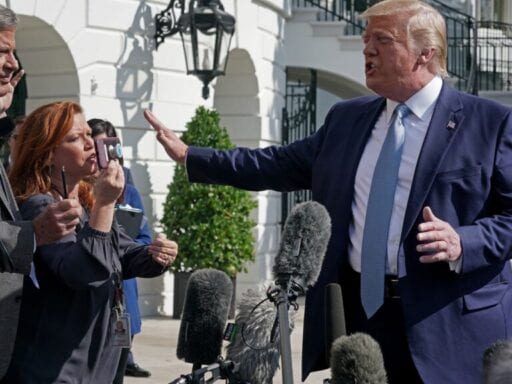 It took one question from a reporter on Friday to destroy Trump’s new talking point.

To hear President Donald Trump tell it, his desire to get foreign governments like Ukraine and China to open investigations into the Biden family is all about principled corruption concerns, not politics.

“I don’t care about Biden’s campaign, but I do care about corruption,” Trump told reporters outside the White House Friday. “I believe there was tremendous corruption with Biden … we are looking at corruption, we are not looking at politics.”

Trump went as far as to insist “this is about corruption” or a close variant of that statement six times in less than 40 seconds.

But all it took was one question from CNBC’s Eamon Javers to destroy his talking point.

“Have you asked foreign leaders for any corruption investigations that don’t involve your political opponents?” Javers asked.

The answer, it quickly became apparent, was no — even if Trump didn’t want to admit it.

“You know, we would have to look, but I tell you — what I ask for, and what I always will ask for, is anything having to do with corruption with respect to our country,” Trump said, dissembling. “If a foreign country can help us with respect to corruption, and corruption probes — I don’t care if it’s Biden or anybody else.”

REPORTER: Have you asked foreign leaders for any corruption investigations that don’t involve your political opponents?

TRUMP: “You know, we would have to look.” pic.twitter.com/zM8BBVDIPP

Trump isn’t alone in trying to make a case that inviting foreign meddling in a presidential election is okay, as long as the goal is to root out “corruption.” Vice President Mike Pence followed him and so did Sen. Ron Johnson (R-WI), who indicated Thursday he doesn’t think “there’s anything improper” about comments Trump made earlier in the day inviting Ukraine and China to investigate Joe Biden and the origins of the Mueller investigation.

This talking point is part of Trump and the GOP’s effort to make people believe he didn’t in fact try to turn American diplomacy into an opposition research arm of his 2020 campaign, but don’t be fooled: This was a blatantly political ploy, and one that experts say likely violates federal law.

The absurdity of Trump pretending to be opposed to corruption, briefly explained

Trump initially started talking about his concerns regarding corruption in Ukraine last month, when news of a whistleblower complaint alleging he abused his office during the course of his dealings with the country brought scrutiny upon his decision to temporarily withhold military aid.

As I detailed at the time, Trump initially claimed his decision to withhold aid was about concerns that the country’s new government might not be doing everything possible to root out corruption — but by the very next day, the president’s talking point changed to Europe not pulling its weight on foreign aid.

“My complaint has always been, and I’d withhold again, and I’ll continue to withhold until such time as Europe and other nations contribute to Ukraine, because they’re not doing it,” Trump said.

Wow — CNN put together this clip highlighting how Trump changed his public rationale for withholding aid to Ukraine from yesterday to today pic.twitter.com/25QJ8VPsnU

As the scandal has escalated over the past week, Trump has rolled out a number of other defenses of his conduct, including that his 2016 win means he can do what he wants, Democrats are really to blame, and dismissing the whole scandal as a mere politically motivated “witch hunt.”

But Trump’s insistence on Friday that he’s really just concerned about corruption is especially hard to buy. Trump is arguably the most personally corrupt president in the history of the United States — he broke decades of precedent by refusing to divest from his private businesses and as a result is being enriched by foreign governments while he’s in office — and as such the notion that he’s suddenly become a principled anti-corruption crusader is absurd on its face.

But the memo about the fateful July phone call between Trump and the Ukrainian president Volodymyr Zelensky that the White House released last week also indicates Trump’s new talking point is nonsense.

During that call, the word “corruption” was never uttered. Instead, Trump suggested military aid to the country was contingent on Zelensky doing him a “favor,” and he then brought up his desire to see investigations opened into the Bidens and the origins of the Mueller investigation.

But you don’t have to take it from me. Shortly after Trump’s media availability ended Friday, Sen. Mitt Romney (R-UT) indicated he’s not buying what Trump is trying to sell either.

When the only American citizen President Trump singles out for China’s investigation is his political opponent in the midst of the Democratic nomination process, it strains credulity to suggest that it is anything other than politically motivated.

In reality, Trump seems to be flailing for an explanation for his actions that sounds less bad than admitting that he abused diplomacy in the hope of padding his reelection chances.

Along those lines, Trump on Thursday evening tried out a slightly different rationale, tweeting that as the president he has “an absolute right” to ask foreign governments to investigate corruption.

But there’s a flaw with that talking point as well. Nobody, the president included, has the right to commit crimes, and even the current chair of the Federal Elections Commission, Ellen Weintraub, has pointed out that Trump’s call for Ukraine and China to investigate the Bidens on Thursday appears to be a clearcut violation of federal law prohibiting the solicitation of foreign campaign contributions.

In its sixth episode on the impeachment scandal, our podcast explains how the Ukraine finds itself at the center of the American political drama, yet President Trump is the least of the country’s worries.

The Big Tech hearings won’t lead to real change. That’s okay.
Dahlia Lithwick has been covering the Supreme Court for 20 years. She recommends one book about vote...
Georgia Sen. Johnny Isakson’s retirement offers Democrats another opportunity for a Senate pickup
Trump finally admitted that Biden won the election — then immediately walked it back
A Trump judge’s attempt to bail out Michael Flynn ends
What the new stimulus money means for small business loan programs