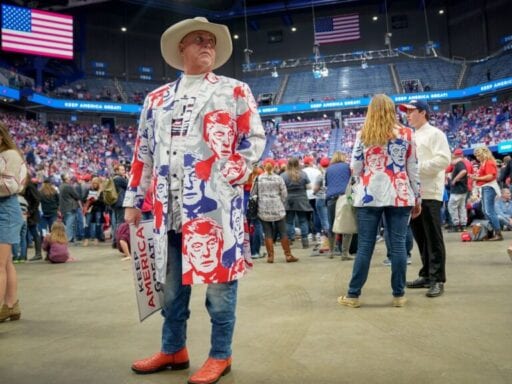 Share
Loading...
A supporter of President Donald Trump waits for the start of a campaign rally for the president on November 4, 2019, in Lexington, Kentucky. | Bryan Woolston/Getty Images

Today, Explained explores how the rallies have changed the American political landscape.

President Donald Trump has been holding rallies since 2015 — even in the first two years of his presidency, when he wouldn’t normally be campaigning. So what is it about these rallies that keeps people coming back? To answer that question, you have to know exactly what goes on at these events.

Those people who show up to rally after rally? They’re called Front Row Joes. And in this episode of Today, Explained, host Sean Rameswaram hears from Gene Huber, a Trump superfan who has been to 18 rallies (and counting).

Bender stresses the importance of these rallies for Trump’s 2020 reelection campaign. Not only are they effectively the only campaigning Trump will be doing, he says, but the free local media coverage is key for Trump’s campaign.

A Trump rally in North Carolina or Wisconsin or Michigan will drive local news for the better part of a week. It puts Trump in the headlines of a battleground state. And they are collecting hundreds of thousands of pieces of data on these rally goers that they’ll use to push everyone to the polls in November of 2020.

Below, we’ve shared a lightly edited transcript of the conversation.

They’ll bring in family members. Donald Trump Jr., Eric Trump, and then Mike Pence will give a few minutes of warm-up. Then it’s the Trump show, which is basically running about 90 minutes now. And, you know, all the greatest hits.

What do you think it is about this environment that can get people to chant “Lock her up!” or “Drain the swamp!” or especially “Send her back!”?

For a lot of the folks who are at these rallies and care enough about Trump and his presidency and his movement to show up hours before a rally, or certainly to attend multiple rallies, and you’re with 10,000 — 5,000 like-minded people. And again, not unlike an Ohio State Buckeye game, where you bring together all of these people from different walks of life but all with a shared purpose and a shared interest.

They also get really swept up in the moment. I talked to about a dozen people who were outside that Trump rally in North Carolina beforehand and it was that racist tweet from Trump who said that the four women, Democrats from Congress, should quote-unquote go back to where they came from, even though they’re all American citizens, three of the four of them were born in the country. And to a T, every single one of these people outside said, “No, no, no, no. I would never use that kind of language … to disparage a minority.” But then two hours later, they’re all inside the arena and participating in a chant that mirrored that language. …

The most surprising thing so far is that people I’ve met who have attended 30, 40, 50 Trump rallies. They call themselves the Front Row Joes. They’re mostly white. A lot of them are recently retired. So … mobile. They’re almost all kind of paycheck to paycheck. A lot of veterans on disability who will load up the minivan and the folding table and deep cycle battery that powers their camping stove and their electronics and will come and get there early.

And even though their disability checks are their entire income, they’ve signed up so that $5 every month gets auto deducted from their disability check to go to the Trump campaign. These rallies are announced with very short notice, so it puts the airfare out of reach for a lot of people, but they’ll figure out who’s going, who they can carpool with, and if they can share hotel rooms and they’ll share hotel rooms in the sense of they’ll show up two days early but then Libby will wait in line with the lawn chairs and the coolers while April is back napping at the hotel. And when the gates open up, make sure you’re out of the way because it’s a mad rush for the doors.

What do you think it is that keeps the Front Row Joes coming back for a show that you’ve noted is oftentimes pretty similar to the show they saw last time?

Yeah. Definitely. I mean, there is an old-time tent revival aspect to these rallies. And a sort of ritual of it. And there’s a certain validation to it, too. I mean, for a lot of Trump supporters, and especially the Front Row Joes, they were among the first people in America to recognize the resonance of Trump’s political message. And they were right. They picked a horse early on, stuck by him, and they won.

All of the people I talked to, the one thing they talk about is the energy they get from these rallies and it’s kind of psychic cleansing that comes from 90 minutes of participating in the same chants and cheering the same applause lines as 20,000 other people, like-minded people, that a lot of them don’t get out of their normal daily lives.

You know, there is a certain kind of loneliness that some of these people have coming into a rally with. And I talked to one woman who said that Trump has sort of changed her life in terms of the confidence that it gives her. And to sort of see Trump’s brashness, she says she’s more willing to speak up at work and in interactions in her day-to-day life that she took from going to Trump rallies and watching him perform.

One thing that is definite is that Trump has changed the way candidates campaign for president. I mean, we saw Elizabeth Warren get tens of thousands of people in New York. And thousands and thousands of people on the West Coast. I think these are real tangible changes in how people will be expected to campaign and show support. Obama brought out big crowds, but in big moments, a speech in Berlin, his acceptance speech.

When he sang “Amazing Grace” in South Carolina, right?

They were all leading up to moments and very much built up to it — weeks and weeks in the making where every single rally is 15,000 people, every couple of weeks.

And I don’t know how Democrats are going to replicate that this time around. And it’s gonna be a constant question for them. How much support is Joe Biden really gonna be if he’s only bringing out a few hundred people at a time? How is Elizabeth Warren matching up with Trump if she can get big crowds every couple of months? For good or bad, I think that’s changed the way candidates are going to run for a while.

There is a theory that this is not good, right? That the way you get big crowds is by throwing out red meat to your base and sort of further dividing the country or segmenting the country into far right or far left. And you’re not going to get, by definition, 20,000 people to show up for a message of “I can work with the other side,” right?

Or to hear about your Medicare plan.

Exactly, like that doesn’t filter down to an easy chant.

And do you think if Trump loses in November of 2020, that’s sort of the end of the political involvement of this tribe, of the Front Row Joes, of this disaffected group of people who attend these rallies and chant their chants?

I think it’s a really good question of, “What happens if he loses?” to the Trump base. And really, “What is now the Republican Party?”

Listen to the full episode of Today, Explained and subscribe wherever you get your podcasts, including: Apple Podcasts, Google Podcasts, Spotify, Stitcher, and ART19.

The FDA authorized the use of an experimental antibody treatment for Covid-19
Trump’s Manafort-Cohen tweetstorm, explained
A bait-and-switch scam ran unchecked on Airbnb. Here’s how it worked.
Conservatives are turning on Taylor Swift after she endorsed Democrats
Senators are demanding a solution to police stopping black men for wearing — and not wearing — masks
10 great Stephen King stories that are ripe for film adaptation