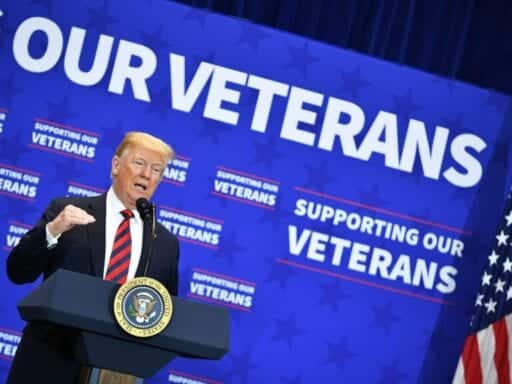 Narrow networks are an issue for many Americans. Now they’re affecting vets.

The New York Times’s Jennifer Steinhauer had a great story last week on this unexpected hitch for the Mission Act, which Trump regularly touts at his rallies as a major accomplishment for his administration. It appears the news of the problems with implementing the new law was met with great shock by Capitol Hill staff and lawmakers, who may now need to allocate tens of millions more dollars to fix the problem.

The Mission Act was, at its core, pretty simple: Veterans who had to travel a long way to visit a Veterans Administration hospital or health care facility — defined as 30 minutes or more under the law — would be eligible to receive primary health care and mental health services from a private provider. Those services would still be paid for by the federal government, giving veterans more flexibility about where they could get care without losing access to the benefits they enjoy through the VA. An estimated 2 million vets are expected to be eligible for this additional flexibility, indicating the law was meeting a real need for these patients.

To carry out the plan, the federal government contracted with private companies, which would be charged with setting up provider networks (just like most of us have with our private insurance) that would include the primary care and mental health clinics where veterans could receive care under the new program.

And that’s where the snag has been, according to Steinhauer’s report: The company responsible for coordinating care in 36 states plus DC and Puerto Rico recently told Congress they did not have enough money to provide an adequate network that would be able to provide care for the millions of vets who might take advantage of the new choices available to them.

Officials at Optum Public Sector Solutions, the third-party administrator for the new health plan for veterans across a large portion of the United States, recently told congressional aides that they were unable to guarantee a health care network large enough to accommodate all the veterans who might seek care under the new system. They suggested that more money — perhaps as much as $75 million — would be needed to help build a larger network. The contracts for their region, complete with seven renewable one-year options through 2026, were worth a potential total of $55.2 billion.

A VA spokesperson downplayed the significance of the news, saying that any additional funding would be relatively minor, there are always implementation challenges for new programs, and the department had safeguards in place to make sure vets would be able to access health care.

That might be true, and $75 million is a proverbial drop in the bucket of a $55 billion contract. House Speaker Nancy Pelosi was also already talking back in July about pumping more money into the program. There is no problem that a little more money can’t solve.

The Times reported that Optum received the VA contract in part because they came in with the lowest bid — and it’s easier to keep your price tag down if you assume you are going to cover fewer doctors and mental health clinics under your plan. Health insurers throughout the United States have tried to keep premiums and costs down through narrow networks. But that strategy comes with consequences, as the VA is now discovering.

As health care economist Austin Frakt reviewed back in 2017, recent studies have shown that narrow networks

There is ostensibly a benefit to this tradeoff: Plans with narrow networks are cheaper, which means lower premiums (or a smaller government contract, in the case of the Optum-VA deal). But there is the downside: less access to doctors. It might not be much solace that you have a lower monthly premium when you get a cancer diagnosis and can’t get your insurance to cover care at a top-tier cancer center. Remember, surprise medical bills can result from narrow networks.

Narrow networks are often held up, along with high-deductible insurance, as a market-driven way to reduce health care costs. But in both cases, the trade is typically less care for the lower costs.

In the case of the VA, more money can be spent to fix the issue. But for millions of Americans with commercial insurance, the same kind of support isn’t coming.

Why the Supreme Court is unlikely to steal the election for Donald Trump
Kellyanne Conway’s alleged 2018 assault, explained
No one knows why these Covid-19 patients’ symptoms keep relapsing
Wendy tries to make Peter Pan realistic, with mixed results
Golden Globes 2019: the complete list of winners
The Supreme Court showdown over LGBTQ discrimination, explained