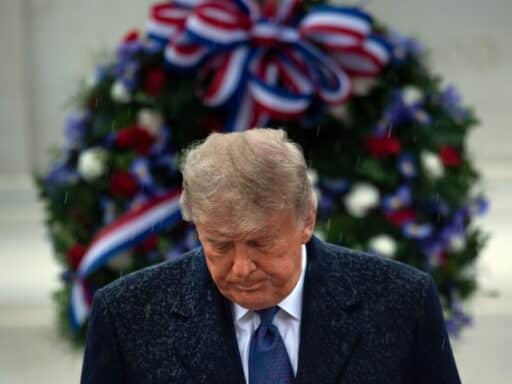 Share
Loading...
The US Covid-19 pandemic looks to get much worse before President Donald Trump leaves office in January. | Brendan Smialowski/AFP via Getty Images

The president of the United States is silent on Covid-19 as the pandemic reaches a new crisis point.

While election night unfurled into election week, America’s Covid-19 pandemic was reaching its most critical stage yet.

The United States is now facing a record number of coronavirus cases (averaging 119,000 every day for the last seven days, according to the Covid Tracking Project) and a record number of hospitalizations (nearly 62,000 as of November 10). About 1,350 deaths were reported on Tuesday, the highest total since mid-August.

And there’s only so much that can be done in the last two months of President Donald Trump’s term to change that trajectory.

Trump had not held a public event for a full week until Veterans Day, and his tweets have been fixated on his baseless claims that the 2020 election was stolen from him. He has not commented on the surge of Covid-19 cases and hospitalizations.

So with the pandemic entering its most dangerous period to date, the country’s current leadership — which we are stuck with until January 20 — does not appear to have any plans to do anything about it.

In one sense, this is not a surprise. As we learned from a New York Times report over the summer, the Trump administration has long sought to put as much responsibility for the Covid-19 response as possible onto the states.

The White House has de facto committed to a dangerous “herd immunity” plan that depends on letting the coronavirus spread unchecked while trying to protect the vulnerable (despite ample evidence that increased community spread will inevitably find its way to the vulnerable) by refusing to take more aggressive action in combating the virus. (And privately, according to the Daily Beast, White House officials acknowledge this is their strategy.)

One saving grace of America’s decentralized public health response is that states and cities can take their own steps to try to slow down Covid-19. San Francisco decided to forbid indoor dining again and also reduced capacity at gyms and movie theaters. New York state is also requiring bars, restaurants, and gyms to close early.

And there are some signs that the latest surge is convincing Republican officials who have been skeptical of more aggressive policies to rethink their approaches. Iowa Gov. Kim Reynolds is now requiring people to wear masks in certain circumstances after having long resisted such a mandate.

But that flexibility cuts both ways. North Dakota Gov. Doug Burgum is still not implementing a statewide mask mandate even as his state’s hospitals reach 100 percent of their capacity (though he is encouraging people to wear masks). To the south, a debate over a mask mandate in South Dakota’s largest city did not result in a new policy, even while the state is experiencing one of the worst Covid-19 outbreaks in the country.

President-elect Joe Biden doesn’t actually have any authority yet, though he is attempting to project competence. As Vox’s German Lopez wrote, Biden’s electoral victory comes too late to stop the fall and winter surges. It’s now only a question of how bad things get before he takes power.

One of the president-elect’s first official actions was to appoint a Covid-19 task force. The Trump administration has not yet acknowledged Biden’s victory or allowed the formal transition to begin, but the Biden campaign said they anticipated such intransigence. Campaign officials told me that the former vice president may reach out to state and local leaders during the transition in order to start getting everybody on the same page about what would be necessary to end the pandemic. But Biden also appears to be mindful of not overstepping his bounds while Trump is in office.

Trump’s obstruction could even undermine the one piece of good news we received this week: promising (but still early) results for the Pfizer vaccine. ProPublica reported on Tuesday that many states and cities were not yet prepared to distribute a Covid-19 vaccine like this one, which has very specific storage and transportation requirements.

The Trump administration’s Operation Warp Speed has paid drug companies to manufacture vaccine doses, an unambiguously good move, but the project is not responsible for actually delivering the vaccine. As ProPublica noted, that will fall to states and, based on their preliminary distribution plans, there is still a lot of work to be done.

And yet, Trump officials have been refusing to cooperate with the incoming administration that will actually be responsible for getting people vaccinated.

It is another riff on the same theme: The US is on its own, at least for the next two months.

Watchmen expands ever further in an episode that introduces even more new characters
Trump casts criticism of his coronavirus strategy as a Democratic Party “hoax”
Officers fire tear gas on peaceful protesters to clear the way for Trump’s photo op
Stranger Things season 3: everything we know so far
Where things stand with the investigation into Capitol security failings
What should the media learn from the coronavirus?