What Ghislaine Maxwell’s arrest could mean for the Epstein case 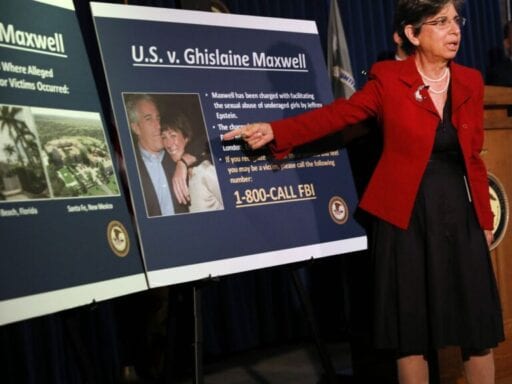 Maxwell’s arrest is a chance for victims to get a measure of justice.

British socialite Ghislaine Maxwell was arrested on Thursday for allegedly luring girls into situations where she knew they would be sexually abused by her billionaire ex-boyfriend Jeffrey Epstein.

Maxwell is accused of using predatory techniques to prime girls for sexual abuse, first befriending them and then using that trust to make it easier for Epstein to victimize them. In the indictment, she is accused of doing this to three underage and unnamed girls — some as young as 14 years old — from 1994 to 1997, according to a federal indictment from the US Southern District of New York.

Though Maxwell has yet to say anything publicly, she has previously denied any wrongdoing. Epstein was accused of sexually abusing dozens of girls and was awaiting trial when he apparently committed suicide in a New York City jail cell. He’d previously pleaded guilty and been convicted in 2008 of soliciting an underage prostitute.

Maxwell’s arrest could signify a major turning point in the Epstein case. Epstein’s victims and their attorneys have alleged that Epstein couldn’t have abused as many girls as he did without the help of collaborators. Maxwell was a central figure in the trafficking scheme for years, according to sworn statements from Virginia Roberts Giuffre, Maria Farmer, and others.

“Maxwell was among Epstein’s closest associates and helped him exploit girls that were as young as 14,” Audrey Strauss, the acting United States attorney for the Southern District of New York, said on Thursday.

For the many of those , Maxwell’s arrest is a new opportunity for them to seek justice.

“The trajectory of the Jeffrey Epstein part of this case ended prematurely. This represents an opportunity for these women to see justice done,” Deborah Tuerkheimer, a law professor at Northwestern University and former prosecutor in Manhattan, told Vox. “For the women who allege they were abused by both of them, this is the remaining outlet, this is the only possible way to see at least criminal justice.”

After months of speculation about her whereabouts, Maxwell was arrested in Bradford, New Hampshire, on Thursday morning, according to the FBI. She is scheduled to be arraigned in federal court in Concord, New Hampshire, on Thursday. Speaking at a Thursday press conference, federal officials would not say exactly how long they had been tracking Maxwell or where else she may have traveled.

“We had been discreetly keeping tabs on Maxwell’s whereabouts as we worked this investigation,” said Bill Sweeney, assistant director-in-charge of the New York Office of the FBI.

Epstein allegedly had numerous female assistants who found underage girls for him to abuse. Some of these women say they were coerced victims of abuse themselves, leaving prosecutors reportedly grappling with the complex question of whether to charge them. Maxwell has not alleged Epstein abused her, and officials have documented a years-long pattern of behavior suggesting she was a close associate and co-conspirator.

Palm Beach investigators, for instance, focused in on Maxwell “from the start,” the Washington Post’s Marc Fisher reported last year:

The girls they interviewed repeatedly described Maxwell as the coordinator of Epstein’s sex-trafficking operation. But detectives were never able to interview Maxwell.

Maxwell is being charged on six counts: enticing minors to travel to engage in illegal sex acts, transportation of a minor with intent to engage in sexual activity, two conspiracy counts related to the prior charges, and two counts of perjury for allegedly lying under oath in a 2016 deposition related to Epstein.

“Maxwell lied because the truth as alleged was almost unspeakable,” said Strauss. “Maxwell enticed minor girls, got them to trust her, then delivered them into the trap she and Epstein had set for them.”

Maxwell’s indictment paints a picture of earlier decades of abuse

The key thing about Maxwell’s indictment is that it covers an earlier period of time than a previous indictment filed against Epstein last summer.

The 2019 indictment against Epstein contained an array of charges that, from 2002 to 2005, the former billionaire recruited multiple underage girls to his Palm Beach residence and Manhattan house, where he sexually abused them. Maxwell’s charges stem from incidents involving three minor victims that allegedly took place from 1994 to 1997, when she was in an intimate and professional relationship with Epstein.

“This case against Ghislaine Maxwell is the prequel to the earlier case that we brought against Jeffrey Epstein,” Strauss told reporters.

During this time period, Maxwell enticed minor victims to travel to Epstein’s residence in various states including New York, Florida, and New Mexico, as well as London, England, knowing full well what awaited the underage girls at his residences, the indictment alleges.

“As far as I’m concerned, everyone who came to his house was an adult professional person,” Maxwell said in a 2016 deposition.

Some of Epstein’s accusers dispute that characterization in their own depositions.

“Ghislaine Maxwell was heavily involved in the illegal sex,” said Virginia Roberts Giuffre in a January 2015 court filing. “She used Epstein’s money and he used her name and connections to gain power and prestige. One way to describe Maxwell’s role was as the ‘madame.’ She assumed a position of trust for all the girls, including me.”

Maxwell “facilitated Jeffrey Epstein’s access to minor victims knowing that he had a sexual preference for underage girls and that he intended to engage in sexual activity with those victims,” Thursday’s indictment reads.

How the continuation of the Epstein case could impact victims

At the end of the Thursday press conference, officials thanked Epstein’s victims for coming forward in difficult circumstances.

“For the many victims of other adult perpetrators who may be listening, the example set by the women involved in this investigation has been a powerful one,” Sweeney said. “They persevered against the rich and connected, and they did so without a badge, a gun, or subpoena, and they stood together.”

But as Tuerkheimer told Vox, the process of seeing justice fully served for these women could be long and arduous. Maxwell’s arrest, while certainly significant, is an early step.

“If [Maxwell] fights the charges and she wants to go to trial and wants the government to prove its case beyond a reasonable doubt, these women are going to have to testify, they’re going to have to be cross-examined, and that’s not easy,” Tuerkheimer said. “To get from here to the end of the road for the alleged victims in the case is likely very difficult.”

For many of these women, the prospect of testifying against someone who not only allegedly facilitated their abuse but abused them herself could be very difficult. The fact that Maxwell initially served as a friendly figure to them before the abuse started could make it even more fraught.

“They groomed people they knew they could take advantage of because they were already vulnerable,” Sheela Raja, a clinical psychologist and author of the book Overcoming Trauma and PTSD, told Vox. “That level of betrayal is even more because she was this mother figure for some of them.”

The legal system is often not easy for victims of sexual assault and trauma, in large part because it places a high priority on victims remembering things exactly as they happened.

“The lack of education about traumatic events, about sexual trauma in particular, really pervades the legal system and judges and juries,” said Raja. “The legal system is a double-edged sword for many survivors of trauma. On the one hand, they want justice. On the other hand, the process may be re-traumatizing for survivors.”

But just as the horror of the Epstein case lies in the large number of victims who were abused, those victims now have strength in numbers.

“The number of victims and alleged victims is something that matters when you think about the criminal justice system to get called into action,” Tuerkheimer said. “When you have this credibility in numbers, that can make a difference.”

These are the trade-offs we make when we depend on billionaires to save us
Trump says Texas’s challenge to his election loss is “the big one.” It’s almost certain to fail.
Trump is heading to Walter Reed hospital “for a few days”
I work in a Nevada brothel shut down in the pandemic. Here’s how we’re getting by.
Democratic Gov. Roy Cooper is reelected in North Carolina
Trump announces creation of 'Space Force'