Why do memes matter? 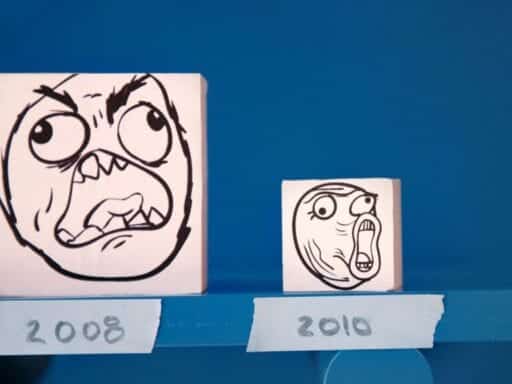 Glad You Asked looks at how meme culture took over the internet.

When we first received questions from audience members for us to answer in our new series Glad You Asked, there was one that really stuck out to me: How did meme culture become such a big part of how we communicate online? It felt like a hard one to answer. Memes aren’t just niche inside jokes anymore; they’re a highly effective format to disseminate everything from SpongeBob screenshots to disinformation campaigns.

In this episode, we interview one of my favorite meme makers, Sonny Side Up, about what it takes to make a living from writing great memes. We talked to memetics researcher Whitney Phillips about how the quick content turnover on the imageboard 4chan defined the visual aesthetic of internet humor for years to come. And we spent an evening watching the first Democratic presidential debate with the editors of Know Your Meme as they tracked meme’d moments in real time.

Glad You Asked is produced and hosted by Joss Fong, Cleo Abram, Alex Clark, and me. We’ve also explored questions about Mars, crying, death, and our story about video games — which is already available if you have YouTube Premium — will be out on Tuesday. To come, I will be looking at whether genetically modified foods are something to worry about while the rest of the team will be taking on topics including how the internet works and is it wrong to fly.

And if you want to dive into some of the best academic research on memes and memetics — oh yeah, it’s a thing — you can check out some of our key sources below:

The Ambivalent Internet: Mischief, Oddity, and Antagonism Online: For this video, we spoke to Ryan Milner and Whitney Phillips, the co-authors of this book on the messy, antagonistic folklore constantly being created through memes.

The Disinformation Report: This is the Senate-commissioned report on Russian election influence that identifies memes as the “propaganda of the digital age.”

Memes in Digital Culture: If you’re curious to read more about the academic study of internet memetics, Limor Shifman’s work is a great place to start.

It’s Supposed to Look Like Shit: The Internet Ugly Aesthetic: The term “internet ugly” comes from this paper by Nick Douglas. It’s a great read on how 4chan’s design influenced the visual aesthetic of memes.