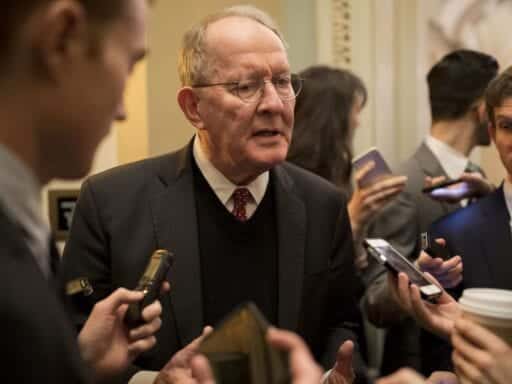 Trump has threatened tariffs on foreign cars. Sens. Lamar Alexander (R-TN) and Doug Jones (D-AL) say they have a bill to stop it.

Trump has threatened to impose a 20 to 25 percent tariff on European carmakers this year, and tweeted about the issue in June. “Based on the Tariffs and Trade Barriers long placed on the U.S. and it great companies and workers by the European Union, if these Tariffs and Barriers are not soon broken down and removed, we will be placing a 20% Tariff on all of their cars coming into the U.S.,” Trump wrote. “Build them here!”

Just last week, ahead of a summit with Russian President Vladimir Putin, Trump called the European Union a “foe” of the United States because of trade disputes.

But this position has received fierce backlash from Trump’s own party.

Alexander and Jones’ bipartisan proposal to stop more tariffs is still not finalized — the senators said they expect to file the bill early next week. According to Politico, the proposal would freeze the Commerce Department’s investigation into imported cars and auto parts and their risk to national security — a process the administration goes through before imposing tariffs without Congress’ approval.

Trump’s trade agenda highlights a major policy divide between the president and his party — one in which Republicans are willing to take a stand. But Trump has made clear that he doesn’t care what other Republicans think. So now it’s up to Congress to actually pass law that would stop the president’s trade war.

Congressional Republicans don’t tend to stringently oppose Trump on much. But his trade agenda is one major exception.

When Trump announced his plans to implement a 25 percent tariff on steel imports and a 10 percent tariff on aluminum imports in March, congressional Republicans loudly voiced their concerns. Now, with Trump’s trade regime already underway, Congress is talking about going on the offensive to find legislative ways to stop a trade war.

Critics say angering US trading partners will lead to retaliatory countermeasures, which could cost American jobs and raise prices for American consumers. Already, countries like Mexico and China have imposed retaliatory tariffs on American goods.

“Kooky 18th century protectionism will jack up prices on American families — and will prompt retaliation from other countries … if the President goes through with this, it will kill American jobs — that’s what every trade war ultimately does,” Sen. Ben Sasse (R-NE) told Politico’s Burgess Everett in March.

In response, Republican Sens. Bob Corker (R-TN) and Pat Toomey (R-PA) have put forth a proposal that would require congressional approval for all tariffs, even if they are imposed on the grounds of national security — as Trump is doing.

Earlier this month, the Senate took a symbolic vote declaring that it stood against Trump’s trade agenda. It’s not clear yet if the Senate will vote on the other proposals.

The House Ways and Means Committee wants Trump’s tax returns by April 23
Mitch McConnell's high court reigns supreme again on Trump travel ban
Here are the 13 movies people will be talking about in October
Why Israel hasn’t annexed the West Bank
Trump’s sister calls him a liar with “no principles” in secret recordings
What really happened in Syria over the past 24 hours, explained