A DHS agency said America’s elections were secure. So Trump fired its leader. 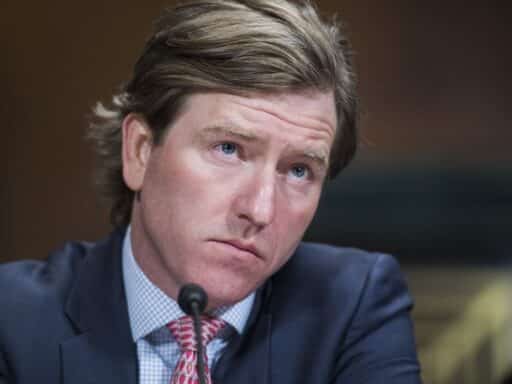 Chris Krebs, head of the Cybersecurity and Infrastructure Security Agency (CISA), was dismissed for doing his job.

President Donald Trump fired Chris Krebs, who led the Homeland Security Department’s Cybersecurity and Infrastructure Security Agency (CISA), on Tuesday evening — days after the agency, which is in charge of protecting elections, called the 2020 presidential election “the most secure in American history.”

Trump did so because the agency’s — and Krebs’s personal — defense of the integrity of the elections punctures Trump’s baseless claim that the election was stolen from him.

CISA’s statement rebutted many of the conspiracy theories Trump has used to claim there was some sort of wrongdoing, and said, in part, “While we know there are many unfounded claims and opportunities for misinformation about the process of our elections, we can assure you we have the utmost confidence in the security and integrity of our elections, and you should too.”

On Tuesday evening, Trump dismissed Krebs in a tweet, falsely calling the statement “highly inaccurate” and claiming that because of that, “effective immediately,” Krebs “has been terminated” as CISA director.

…votes from Trump to Biden, late voting, and many more. Therefore, effective immediately, Chris Krebs has been terminated as Director of the Cybersecurity and Infrastructure Security Agency.

This news isn’t all that surprising; Krebs had reportedly told people for some time that he expected to be fired after the election, in large part because his efforts to correct false claims about election vulnerabilities and mail-in voting had long put him on the wrong side of the White House.

Krebs, who ran the agency that Trump himself signed into existence in 2018, had garnered substantial bipartisan support for his efforts to shore up and strengthen America’s election infrastructure and defend against foreign interference.

In 2020, CISA set up a 24/7 “war room” that election officials could contact to report suspicious activity in real time, and had CISA officials at the ready to deploy to polling places, if necessary, according to the Washington Post. CISA streamlined coordination between states and the federal government on election security concerns, and beefed up its public communication before and after the election on potential threats, including setting up a “rumor control” webpage to debunk election disinformation.

Of course, countering election falsehoods is infinitely more difficult when the president and his allies are the main purveyors of that disinformation. That presidential disinformation campaign — in particular, the lie that a voting system used by certain states changed Trump votes to ones for President-elect Joe Biden — culminated in a statement from CISA and election officials across the US who said in a bolded statement last week: “There is no evidence that any voting system deleted or lost votes, changed votes, or was in any way compromised.”

Likely further drawing the president’s ire was that Krebs also tried to counter misinformation on social media from his official account. In a tweet on Tuesday, Krebs said, in response to allegations that voting machines and software were manipulated, that dozens of election experts had said that “‘in every case of which we are aware, these claims either have been unsubstantiated or are technically incoherent.’”

ICYMI: On allegations that election systems were manipulated, 59 election security experts all agree, “in every case of which we are aware, these claims either have been unsubstantiated or are technically incoherent.” #Protect2020 https://t.co/Oj6NciYruD

After his dismissal, Krebs posted on his personal account: “Honored to serve. We did it right. Defend Today, Secure Tomorrow.”

Honored to serve. We did it right. Defend Today, Secure Tomrorow. #Protect2020

Krebs’s dismissal drew condemnation from lawmakers, mostly Democrats on Capitol Hill. “Chris Krebs is an extraordinary public servant and exactly the person Americans want protecting the security of our elections,” Sen. Mark Warner (D-VA), vice chair of the Senate Select Committee on Intelligence, said in a statement. “It speaks volumes that the president chose to fire him simply for telling the truth.”

“Whenever folks in CT worried about the integrity of the 2020 election, I would tell them that somehow, someway, Trump had left in place, maybe by accident, actual non-partisan professionals in charge of election security. I was talking about Chris Krebs,” Sen. Chris Murphy (D-CT) tweeted.

Republicans, who have been slow at best to refute Trump’s claims, and are often actively trying to help him, were a little more muted in their response. One of the few to offer Krebs support was Sen. Ben Sasse (R-NE), who said that in a statement that “Chris Krebs did a really good job — as state election officials all across the nation will tell you — and he obviously should not be fired.”

Election officials in 2020 faced extraordinary challenges: the potential repeat of foreign meddling, and a pandemic that forced state and local election officials to implement public health precautions and expand options like mail and early voting. But despite all these challenges, the vote was, as one top official for the Election Assistance Commission put it, “one of the smoothest and most well-run elections that we have ever seen.”

But Trump’s refusal to accept the outcome of the 2020 election diminishes these successes while undermining the integrity of November’s elections — and democracy as a whole, which will be even harder to repair after Trump leaves office.

Facebook employees are not as happy with Mark Zuckerberg as they used to be
Photos: what Hurricane Florence’s destruction looks like on the ground
“Racism may target Black people, but it damns a democracy and it damns humanity”
Cities aren’t designed for women. Sarah Everard’s murder shows us the consequences.
Beto O’Rourke pulled in a massive fundraising haul — and 2020 competitors are noticing
The old-school pomp and circumstance of impeachment, briefly explained