A historic number of women have been sworn in to Congress 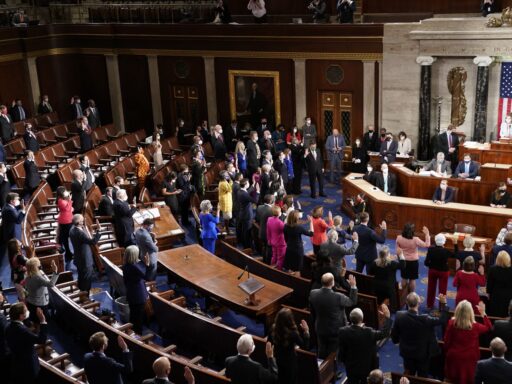 According to Rutgers University’s Center for American Women and Politics, 144 women are now members of Congress, surpassing the previous record of 127. Of these lawmakers, 52 are women of color, which builds on the prior record of 48. Women comprise roughly 27 percent of all lawmakers, up from about 24 percent in 2019.

These wins set a new record for Republican women in Congress, breaking the previous one of 30. Representation has also grown overall: According to CAWP, newly elected Black women, Latina women, and Asian American and Pacific Islander women all broke records in the House as well.

To be clear, Congress is still overwhelmingly male: Just under three-quarters of people sworn into the House and Senate are men. But the success of women candidates this year indicates that the inroads being made toward gender parity in Congress are likely here to stay. The gains on the GOP side, too, suggest that there is at least some improvement in Republican representation, even though the party still lags Democrats by a wide margin.

“In 2018, we were pretty cautious in claiming that it was the ‘Year of the Woman,’ because we didn’t want the perception of women’s political progress to be seen as an anomaly,” says Rutgers political science professor Kelly Dittmar. “The positive trend we see this year demonstrates that it isn’t one.”

Why Republican women had such a strong year

At the time, Rep. Elise Stefanik (R-NY) said that Republicans had reached a “crisis level” of women in the House.

That “crisis” has since spurred more GOP groups — including Stefanik’s Elevate PAC — to boost women candidates, particularly at the primary level where there hasn’t historically been as much support. On the Democratic side, Emily’s List has been integral to backing candidates at the primary stage of the race, and Republican organizations are increasingly working to replicate that model.

This year, that effort ramped up, according to Kodiak Hill-Davis, a founder and political director of Republican Women for Progress, a group dedicated to providing training for GOP candidates. “Without getting these women through the primaries, you can’t get them through the general election,” she told Vox.

A growing number of organizations — including Winning for Women, VIEW Pac, and E-PAC — are among those dedicated to this effort, which includes financial investment and endorsements that highlight women candidates. “In addition to any funding they’ve been able to provide, they also send a signal,” Dittmar said.

According to the Center for Responsive Politics, E-PAC contributed $425,000 to federal candidates in 2020, as of an October report, versus $118,000 in 2018. Winning for Women’s PAC contributed 125,000 this year compared to 143,000 in 2018, and VIEW Pac contributed $530,000 compared to $410,000. At least 11 of the candidates that E-PAC endorsed ended up winning their primaries, with several going on to win in the general election, including Ashley Hinson in Iowa’s First District and Nancy Mace in South Carolina’s First District.

Growing support and recruitment of GOP women candidates has also coincided with an increase in the number of Republicans who wanted to run. After seeing Democrats’ success in 2018, more Republican women opted to pursue congressional office; 227 female Republican candidates vied for House seats this cycle. “In 2018, GOP women watched from the sidelines as a wave of Democrat women were elected,” says Olivia Perez-Cubas, a spokesperson for Winning for Women, in a statement. “The GOP vowed to make a difference and invested in women like never before.”

Republicans overall also had a stronger-than-expected year down-ballot, narrowing their margins in the House and hanging on to key seats in the Senate. Republican women benefited from this energy and were key contributors to the party’s success, flipping at least seven districts that Democrats had won in 2018 including Florida’s 27th District and California’s 48th District. They also won seats in Republican strongholds like Tennessee’s First District and Georgia’s 14th District.

These victories could encourage the Republican Party to promote more gender diversity among its elected officials — something it has long avoided, in part out of an aversion for so-called identity politics. “Republicans, we really shy away from the traditional identity politics. I’m a big believer that this is not identity politics, this is just focusing on finding the best candidates, the strongest candidates, who are also Republican women and making those investments early,” Stefanik said in a post-election CBS News interview.

Congress is still far from gender parity, but this year’s results show that women are continuing to build on current gains

The statistics on gender parity in Congress are still grim: Even with the success they’ve seen in recent elections, women comprise just over a quarter of all lawmakers.

That said, these wins are helping to bring both chambers that much closer to parity — and adding new perspectives to the policymaking process.

“After this election season, the face of our politics will be changed for the betterment of our communities and our government,” said Higher Heights CEO Glynda Carr, in a statement. “Make no mistake: Black women’s energy, work and commitment to building a true democracy is continuing to diversify and improve America’s leadership.”

After the record broken again this year, even more women could join them in House elections down the line.