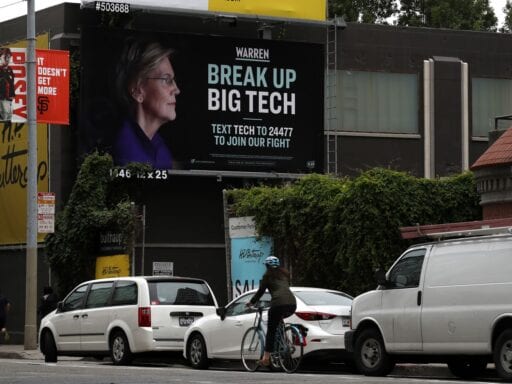 Elizabeth Warren and some of Big Tech’s most vocal critics are hosting the event for Biden, who has been difficult to pin down on tech issues.

Joe Biden’s campaign has signed off on a fundraiser on tech issues being hosted by a series of prominent critics of Big Tech, including Sen. Elizabeth Warren. The event serves as the latest clue in the challenge to figure out how a Biden administration would govern the tech industry, suggesting that those critics would at least have a line into his White House.

Warren and a half-dozen other big names are set to hold an October 27 event on “Advancing Innovation, Competition, and Prosperity in the American Tech Sector,” according to a copy of the invitation obtained by Recode. The event is one of the closest linkages yet between the most pro-regulation voices in the Democratic Party and the Democratic nominee, who has not publicly pinned down his precise positions on tech regulation.

The speakers at the event include David Cicilline, the Congress member who just led the congressional investigation into Big Tech companies; Tish James, New York’s state attorney general who is leading the states’ own investigations; and leading proponents of a tech breakup such as early Facebook investor Roger McNamee and influential Columbia Law School professor Tim Wu. And Warren, who made Big Tech issues a cornerstone of her presidential campaign.

Biden, who will not be there, does not necessarily endorse every position espoused by speakers at fundraisers held on his behalf. But presidential campaigns vet and debate potential fundraiser hosts — and, in this case, it is not just that one or two hosts have a personal, private opinion about the conversation topic and they happen to be organizing a broader pro-Biden event. Here the Biden campaign is blessing an entire event organized around one point of view — that the tech giants are too menacing and stifling out competition — featuring a lineup of the most high-profile leaders on the issue.

One reason it is particularly revealing is that Biden has proven to be elusive on tech issues. Activists on the left hope that he will govern in a less tech-friendly way than Barack Obama did. But while Biden has made scattered critical comments about Facebook in particular, he has not made tech regulation a campaign priority and has left both the activists and the tech companies themselves largely speculating about what a Biden administration would mean for them.

Another interpretation of that, though, is that Biden is malleable on the issue — and therefore can be influenced by political assets such as campaign fundraising potential. One objective of the October 27 event hosted by Warren and others may be to raise a large amount and show Biden that there is money to be made — and that there’s political upside more broadly — by allying with the tech-breakup crowd. Tickets range from $250 to $100,000.

Because Biden certainly knows that there is big money on the other side of the issue. Some Biden supporters who are critical of Big Tech are concerned about Biden’s ties to tech elites, such as former Google CEO Eric Schmidt. And in a sign of just how enigmatic Biden has proven on tech regulation, Biden’s campaign has also hosted technology-focused fundraisers with Schmidt, a leading voice against the breakup of companies like his former employer.

So all told, the question these fundraisers pose is: Who will have more influence in Joe Biden’s administration when it comes to Big Tech: Eric Schmidt or Elizabeth Warren?

Over 1,100 former DOJ officials say Attorney General Bill Barr must resign
Joe Biden calls for Democrats to 'rise up,' force 'consensus' pick for Supreme C...
The House has voted to allow remote voting for the first time in its history
The EPA just undid Scott Pruitt’s final act in office
Can you lessen anxiety by playing a game on your phone?
Knowing why we age could help us learn how to live forever. Do we want to?