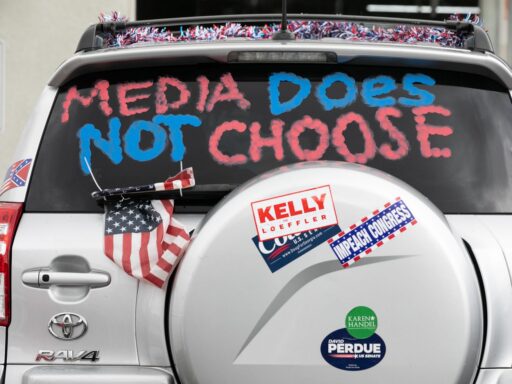 Trumpy calls to boycott the election may throw these races to the Democrats.

Let’s start this piece with some appropriate caveats about polling in general. 2020 was not a great year for the polling industry. Many polls, especially in Midwestern states and in Maine, vastly overestimated Democratic performance. The polls predicted that Joe Biden would win the presidential race, and he did, but he had comfortable polling leads in several states that turned out to be much closer.

That said, pollsters in Georgia did a pretty good job with the presidential and Senate races. The FiveThirtyEight polling average predicted that Biden would win the state by 1.2 points. He wound up winning by 0.2 points. So the polls were only off by 1 percentage point, and close in the initial Senate races, too. That suggests that Georgia polling is more reliable than the polls in many other states.

Which brings us to a new SurveyUSA poll looking at the January 5 runoff elections in Georgia, which will decide which party controls the United States Senate (SurveyUSA is an “A” rated pollster, according to FiveThirtyEight). The topline in this poll is that Democrat Raphael Warnock leads appointed Republican Sen. Kelly Loeffler by a 52-45 margin. Meanwhile, Democrat Jon Ossoff leads incumbent Republican Sen. David Purdue by a smaller 50-48 margin.

This poll is just one snapshot of the race. But if Democrats do win both seats, the incoming Senate would be evenly split between Democrats and Republicans, which means that Vice President-elect Kamala Harris would hold the tie-breaking vote and Sen. Chuck Schumer would be majority leader (though Republicans would likely still be able to filibuster most legislation).

One interesting thing about the SurveyUSA poll is that it offers a window into whether Republican turnout is likely to drop because of efforts by President Trump and his allies to diminish confidence in US elections. Briefly, the poll suggests that a small but significant number of Georgia Republicans do plan to sit out the election due to those efforts — enough to potentially flip these races to Warnock and Ossoff.

Even before many outlets had called the 2020 race for Biden, Trump and his allies started touting evidence-free claims that Trump only lost because of widespread voter fraud. Trump campaign lawyers and lawyers aligned with the campaign also filed a series of meritless lawsuits challenging the election results or seeking to prevent states from certifying Biden’s victory. These lawsuits have accomplished little, if anything.

Trump has also attacked Georgia Secretary of State Brad Raffensperger and Gov. Brian Kemp, both of whom are Republicans, for supposedly enabling voter fraud in that state. Again, there is no evidence that such fraud exists.

Georgia Secretary of State, a so-called Republican (RINO), won’t let the people checking the ballots see the signatures for fraud. Why? Without this the whole process is very unfair and close to meaningless. Everyone knows that we won the state. Where is @BrianKempGA?

Some of Trump’s allies have even gone so far as to urge Republicans to boycott the Georgia runoff elections. At a rally in Atlanta this week, for example, former Trump campaign lawyer Sidney Powell said that she “would encourage all Georgians to make it known that you will not vote at all until your vote is secure.”

These attempts to undermine confidence in the Georgia runoff elections appear to be having an effect. The SurveyUSA poll interviewed a total of 717 registered voters, 118 of whom said they are not likely to vote in the runoff. Of these likely non-voters, 13 percent said they planned not to vote because “the voting process is rigged.” Another 5 percent said they are “intentionally boycotting the runoff.”

To be clear, 118 respondents is a very small sample size. So no one should take these figures as gospel. But there’s also other evidence that Republicans are more likely to sit out the January 5 runoffs than Democrats. As data journalist Nate Silver notes, the poll suggests that the January electorate could be 3 to 4 points more Democratic than the voters who turned out in November.

This poll implies a drop-off in Republican turnout. It has Biden +4 among the likely voter electorate for the runoff, when Biden actually won by <1. https://t.co/EGxzpbVqi3

In other words, if Warnock and Ossoff do prevail next month, they could have Trump and Trump allies like Sidney Powell to thank for their victory. Trump’s efforts to undermine confidence in the election are likely to be ignored by Democrats, but they appear to be resonating with at least some Republicans.

And in two close elections, if even a small fraction of Republicans decide that their votes won’t matter, that could swing both races to Democrats.

4 things to know about Australia’s contentious election
The woman who helped change how America thinks about the death penalty is not done yet
Why Sacramento is still protesting Stephon Clark’s death, one year later
Rapid $1 Covid-19 tests exist. Why can’t we get them?
Online shopping has boomed in the pandemic. But what about all the packaging?
E. Jean Carroll says Trump raped her. She’s suing him. Now she’s been fired from Elle.