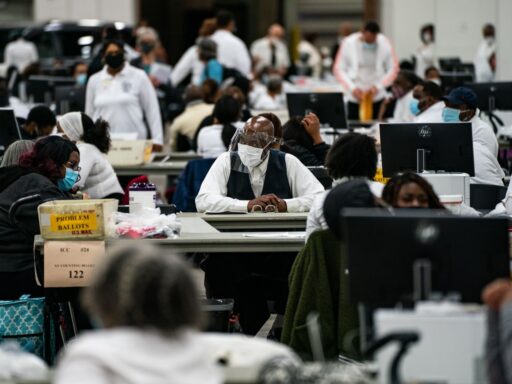 Trump and his allies have lobbied for votes in Wayne County, home to majority Black Detroit, to be thrown out.

With Michigan’s Monday deadline for certifying its election results looming, attempts by President Donald Trump to overturn the outcome in the state has led to a voting rights lawsuit — and could lead to a criminal investigation of officials there.

On Friday, a group of Detroit voters filed a federal lawsuit, alleging that the Trump campaign’s legal actions aimed at throwing out some votes in Wayne County, home to Detroit, amounted to a mass disenfranchisement of Black voters.

“Repeating false claims of voter fraud, which have been thoroughly debunked, Defendants are pressuring state and local officials in Michigan not to count votes from Wayne County, Michigan,” the lawsuit states. “Defendants’ tactics repeat the worst abuses in our nation’s history, as Black Americans were denied a voice in American democracy for most of the first two centuries of the Republic.”

The city of Detroit is nearly 80 percent Black, and overwhelmingly votes Democratic in national elections. President-elect Joe Biden won Wayne County by about 332,000 votes, and it was critical to his 150,000-vote victory in Michigan, a battleground state that was key to Trump’s 2016 victory.

Essentially, as Trump’s personal lawyer Rudy Giuliani said in a Thursday press conference: “It changes the result of the election in Michigan, if you take out Wayne County.”

To that end, Wayne County’s election results have been challenged by the Trump campaign and its loyalists throughout the week.

On Tuesday, the two Republican canvassers on the four-person Wayne County elections board briefly blocked the vote totals from being certified. As Vox’s Andrew Prokop has explained, these Republican officials’ “stated reason was that there were discrepancies between precincts’ counts of how many named people voted and the actual count of votes. This is known as precincts being ‘out of balance.’”

And certain precincts in Wayne County were, in fact, out of balance, but usually by no more than four votes — not enough to change the outcome of the election. Livonia, a majority white city, was the area most out of balance, with a 27 vote discrepancy. Nevertheless, GOP canvasser Monica Palmer argued that all Wayne County results should be certified, except for those from Detroit, a situation that would, as Giuliani said, completely change who won the state.

The fact that it was votes in a majority Black area that GOP canvassers hoped to toss out was immediately decried as being illegal and discriminatory — the president of Detroit’s NAACP chapter, Wendell Anthony, called Palmer “a disgrace” to her face after she suggested doing so. But is was only part of what triggered the lawsuit. The other part had to do with Trump himself.

Trump praised the efforts of Palmer and William Hartmann, Wayne County’s other Republican canvasser, on Twitter Tuesday evening, despite the fact the GOP officials had agreed to certify the results. Palmer and Hartmann have since requested the certification be rescinded, it still stands.

Trump’s campaign acknowledged this reality on Thursday, when it voluntarily dropped a federal lawsuit aimed at halting the certification of Wayne County votes. That came after three similar lawsuits in Pennsylvania, Georgia, and Arizona were thrown out. The campaign has said that the Michigan suit was dropped because of the actions of the Wayne County officials.

However, the president’s efforts to change the election’s outcome did not end there: On Friday afternoon, Trump hosted a meeting at the White House with a delegation of four Michigan Republicans. The meeting was seen as an effort to pressure the lawmakers into using legislative power to ignore the will of voters and send pro-Trump electors to the Electoral College, giving Trump the state’s 16 Electoral College votes.

But after that meeting, the state’s top Republicans, Senate Majority Leader Mike Shirkey and Speaker of the House Lee Chatfield, issued a statement saying they would follow “the normal process” for certifying the state’s electors.

“The candidates who win the most votes win elections and Michigan’s electoral votes. These are simple truths that should provide confidence in our elections,” they said.

That meeting — and the Wayne County certification incident — were both cited in the Detroit lawsuit, which was brought forth by three Detroit voters and the Michigan Welfare Rights Organization, represented by attorneys from the NAACP Legal Defense Fund.

And the suit is part of a growing wave of concern that the Trump campaign is working to delegitimize Black votes — not only in Detroit, but in other largely-Black cities, such as Atlanta, Philadelphia, and Milwaukee, the Washington Post reports.

“It’s as vile now as it was during Reconstruction,” Carol Anderson, professor of African American studies at Emory University, told the Post. “It’s a very narrow, slippery slope, from saying ‘illegal votes’ to ‘illegal voters,’ so this attack on Black voters is real.”

Michigan official’s interactions with Trump have also reportedly also drawn the attention of Michigan Attorney General Dana Nessel, who, according to a separate Washington Post report, may open investigations into whether officials’ efforts to rescind their certification and lawmakers’ meeting with the president involved any conspiracy, bribery, or perjury that might violate state law.

Nessel’s office did not comment to the Post on that story. If her office pursues the matter, officials found to have acted improperly could face criminal charges and penalties including jail time.

Michigan will soon certify its results

The contents of Friday’s meeting at the White House with Michigan Republicans remains opaque, and White House officials have not commented on what transpired there.

Afterwards, however, Senate Majority Leader Shirkey and House Speaker Chatfield issued a statement saying that they had requested coronavirus relief funds at the meeting, and would “follow the law and follow the normal process regarding Michigan’s electors, just as we have said throughout this election.”

This would appear to suggest that the lawmakers do not plan to interfere with Michigan’s certification process, which is scheduled to conclude on Monday.

As Vox’s Andrew Prokop has written, the state certification process requires sign-off from a four-person, bipartisan board, similar to the one in Wayne County that had initially deadlocked.

Prokop notes that another deadlock at the state level would “throw into question the matter of whether Biden will get Michigan’s 16 electoral votes,” but that even if the president were to receive Michigan’s electoral votes, the Trump camp would need to successfully overturn results in at least two other swing states to deprive Biden of his overall victory in the Electoral College.

And while Trump has mounted similar challenges in other states in a seeming attempt to do just that, any certification struggles would almost certainly go to court, Prokop writes. In Michigan, top officials are largely Democratic, including the secretary of state, Attorney General Nessel, and Gov. Gretchen Whitmer, all of whom would be expected to fight any last minute effort to alter the election results. And while Republicans hold the state legislature, Shirkey and Chatfield, for the moment at least, appear disinclined to aid the president.

Still, given the division of power in the state, and given the lack of precedent for efforts like the president’s, exactly what would happen if the state fails to certify on Monday remains unclear.

Scientists found a seaweed patch stretching from the Gulf of Mexico to Africa
The Frozen 2 soundtrack: a guide to the best songs
A powerful Republican House member just got blasted on Twitter — by his own son
How Spider-Man: Homecoming paid homage to Steve Ditko
Amazon will spend $5 million to prop up Seattle businesses harmed by coronavirus precautions
Getting an abortion in “the most pro-life state in America”