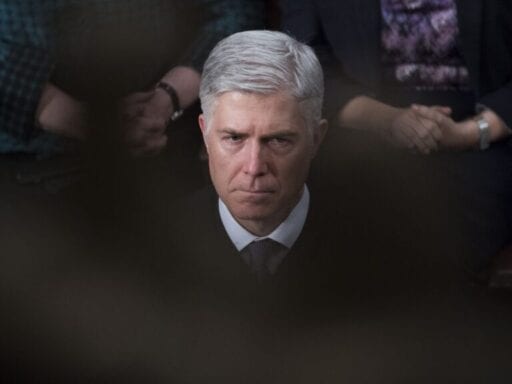 A new Marquette Law School poll reveals some fascinating data on how the public perceives the Supreme Court and how the public wants the Court to behave in pending cases.

By a wide margin, poll respondents oppose overruling Roe v. Wade: 61 percent would oppose such a decision compared to 29 percent who support it. They oppose a decision striking down the Obama era Deferred Action for Childhood Arrivals program, which protects young immigrants from deportation, 53 percent to 37 percent. They oppose a decision allowing business owners with a religious objection to LGBTQ people to deny services to those people, 57 percent to 34 percent. And they oppose a Supreme Court decision striking down the Affordable Care Act 52 percent to 38 percent.

Many of these issues are currently pending before the Supreme Court. Though the poll found the public mostly supports liberal outcomes in forthcoming cases, its respondents did take a more conservative view of a case asking if “a program that financially supports students attending private schools may also include religious schools without violating the constitution.” Fifty-three percent of respondents would side with the religious school while 33 percent prefer the other outcome.

Perhaps the most significant finding, given the recent oral arguments in a trio of cases asking whether federal anti-discrimination law makes it illegal to fire someone because of their sexual orientation or gender identity, is that the poll finds strong support for a decision holding that such discrimination is illegal.

By a margin of 61 percent to 30 percent, poll respondents favor a Supreme Court decision holding “that laws prohibiting employment discrimination on the basis of sex also apply to discrimination based on sexual orientation of gay, lesbian, or transgender individuals.”

The poll surveyed 1,423 adults within the United States and it has a margin of error of +/- 3.6 percentage points.

Of course, judges are supposed to base their decisions on the law, not on opinion polls. But the polling data regarding LGBTQ discrimination is significant because a potentially pivotal member of the Supreme Court suggested that public opinion could be relevant to the outcome of the LGBTQ discrimination cases.

During oral arguments in Altitude Express Inc. v. Zarda, Bostock v. Clayton County, and R.G. & G.R. Harris Funeral Homes v. EEOC, Justice Neil Gorsuch repeatedly expressed sympathy with the view that the text of a federal anti-discrimination law — Title VII of the Civil Rights Act of 1964 — bars discrimination against LGBTQ workers. Nevertheless, he openly fretted that maybe the text of the law wasn’t enough to justify a decision in favor of trans workers.

“I’m with you on the textual evidence. It’s close, okay?” Gorsuch told David Cole, the lawyer arguing for trans plaintiff Aimee Stephens in Harris Funeral Homes. But should a judge “take into consideration the massive social upheaval that would be entailed” in a decision banning anti-trans discrimination?

Which brings us back to the Marquette poll. Gorsuch appears to believe that the case for a judicial decision prohibiting anti-trans discrimination is weakened because such a decision would create a societal backlash. But the poll suggests that a decision banning LGBTQ discrimination in the workplace would have strong public support.

Indeed, the Marquette poll suggests that such a decision would enjoy even more support than the Court’s marriage equality decision in Obergefell v. Hodges. In 2015, when that case was handed down, a Pew poll found that just 55 percent of the country favored same-sex marriage (this number rose to 61 percent in 2019). But there was little social upheaval after Obergefell — unless you count the handful of bakers who refused to bake wedding cakes for same-sex couples.

If Gorsuch truly sees Harris Funeral Homes (and perhaps Bostock and Zarda) as cases about whether the risk of “massive social upheaval” trumps the text of the law, in other words, then he should breathe easy.

The textual case for banning LGBTQ discrimination is strong

As Justice Elena Kagan put it during oral arguments in Zarda and Bostock, this language is expansive and it applies to any employment discrimination that takes account of a worker’s “sex” (a term that refers to gender and not sexual intercourse in this context). The test, if a woman is fired, is “would this woman have been treated differently if she were a man?”

Meanwhile, the strongest argument for the employers’ position in Zarda, Bostock, and Harris Funeral Homes is that Congress didn’t intend to ban LGBTQ discrimination when it enacted the Civil Rights Act of 1964 — 11 years before the federal government lifted its own ban on gay employees.

As Justice Samuel Alito put this during the Bostock/Zarda oral argument, the question of “whether Title VII should prohibit discrimination on the basis of sexual orientation is a big policy issue, and it is a different policy issue from the one that Congress thought it was addressing in 1964.”

There are some members of the Supreme Court, such as Chief Justice John Roberts and Justice Stephen Breyer, who are sometimes open to arguments that judges should consider what Congress hoped to accomplish when it enacted a particular law. But Gorsuch emphatically denies that it is ever appropriate for judges to engage in this kind of analysis.

Gorsuch recently bragged that he has two rules for his law clerks. Rule No. 1 is “don’t make stuff up.” Rule No. 2 is “when people beg, and say, ‘Oh the consequences are so important,’ and when they say, ‘You’re a terrible, terrible, terrible person if you don’t,’ just refer back to Rule No. 1. And we’ll be fine.”

It’s hard to square that second rule with a decision holding that judges must permit discrimination to avoid “massive social upheaval.”

Indeed, Gorsuch describes his theory of how judges should interpret laws at great length in a book he published last month. Gorsuch’s textualist approach, he writes, “is value neutral” because it “hands out victories based on the strength of consistency with a statutory text, not passing popularity.” He explicitly repudiates judges who “guess about unspoken purposes hidden in the hearts of legislators” or who weigh their own estimation of “what an ‘evolving’ or ‘maturing’ society should look like.” Only the text of the law matters.

If Gorsuch hews to this approach, he will vote that LGBTQ employment discrimination is illegal. Indeed, Gorsuch himself seemed to acknowledge that the text demands such a decision during the Bostock/Zarda oral argument. When a lawyer representing the employers in those cases argued that discrimination on the basis of sexual orientation is separate from “sex” discrimination, Gorsuch recoiled.

Should Gorsuch violate his previous rules and method and ask whether following the text of the law would lead to too much social upheaval, he would be engaging in bad political punditry: The polling data suggests that the public will react positively if the Supreme Court says LGBTQ discrimination is illegal.