A Pastafarian hilariously trolled a town council meeting. The stakes are profoundly serious. 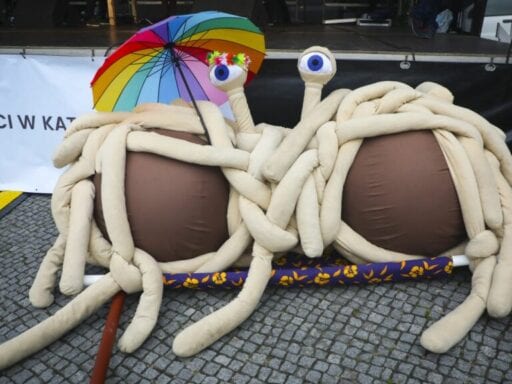 Share
Loading...
A figure of the Flying Spaghetti Monster is seen during the Equality March in Katowice, Poland, on September 7, 2019. | Beata Zawrzel/NurPhoto via Getty Images

The Satanic Temple and the Church of the Flying Spaghetti Monster are playing a dangerous high-stakes game with the Supreme Court.

Last Tuesday, Barrett Fletcher, the “founding pastor of the First Lower Peninsula Congregation of Pastafarians,” placed a pasta strainer on his head and opened an Alaskan local government meeting with a prayer.

“I’m called to invoke the power of the true creator of the universe, the drunken tolerator of all lesser and more recent gods, and maintainer of gravity here on earth,” Fletcher solemnly intoned before the Kenai Peninsula Borough Assembly and the gathered audience. “May the great Flying Spaghetti Monster rouse himself from his stupor and let his noodly appendages ground each assembly member in their seats.”

Pastafarians are adherents — or, at least people who hold themselves out as adherents — of the Church of the Flying Spaghetti Monster. The Church is a satirical faith, founded in 2005 to troll government officials who want to break down the wall of separation between church and state.

It’s silly, but underlying it is something profoundly serious. In its 2014 decision in Town of Greece v. Galloway, the Supreme Court reaffirmed that despite the Constitution’s ban on laws “respecting an establishment of religion,” legislatures may begin their sessions with sectarian prayers. Significantly, the Court also stated explicitly that such prayers are permitted even if Christian pastors are overwhelmingly overrepresented among the people given the opportunity to deliver such a prayer.

The town at issue in Galloway, Justice Anthony Kennedy wrote, “made reasonable efforts to identify all of the congregations located within its borders and represented that it would welcome a prayer by any minister or layman who wished to give one.” The fact that “nearly all of the congregations in town turned out to be Christian does not reflect an aversion or bias on the part of town leaders against minority faiths.”

Then, the Supreme Court held last June in American Legion v. American Humanist Association that a 40-foot tall, cross-shaped monument may remain standing on government land in Maryland. In so holding, the Court appeared to scrap a doctrine known as the “endorsement test,” which prohibited the government from taking actions that would, in Justice Sandra Day O’Connor’s words, convey a “message of endorsement” of a particular faith “to the reasonable observer.”

Yet there was a silver lining for defenders of secularism in both Galloway and American Legion. Though the former case permits Christians to dominate legislative prayers, Justice Kennedy also wrote that the government must obey a rule of neutrality when dealing with religion. Legislatures that wish to open with a prayer are not required to “search beyond [their] borders for non-Christian prayer givers in an effort to achieve religious balancing.” But they must maintain a “policy of nondiscrimination.”

American Legion, meanwhile, was the first major church/state separation case to be heard by the Court since Kennedy was replaced by the more conservative Justice Brett Kavanaugh. Yet even that decision, which was written by the staunchly conservative Justice Samuel Alito, suggests that the government must make “an honest endeavor to achieve inclusivity and nondiscrimination” when it deals with different faiths.

It’s this rule of neutrality that allows people like Mr. Fletcher to invoke the Flying Spaghetti Monster in legislative prayers. It also enables even more provocative actions by the Satanic Temple, a group that’s had tremendous success forcing governments that wish to display Christian iconography to display Satanic images as well. Or, even better from the Temple’s perspective, to pressure state and local governments to stop promoting religion altogether.

The question, however, is whether the courts — including a Supreme Court that has sometimes been very unsympathetic to minority religions — will allow these tactics to continue. Eventually, it is likely that a state or local government that’s targeted by Pastafarians or Satanists will bring a case all the way to the justices. And the Court’s current majority could be sympathetic to such a government.

The Church of the Flying Spaghetti Monster began in 2005 with a satirical open letter to the Kansas School Board, penned while the board was considering whether the quasi-creationist theory of “intelligent design” should be taught alongside the scientific theory of evolution.

After detailing some of the tenets of his supposed beliefs — “it is disrespectful to teach our beliefs without wearing His chosen outfit, which of course is full pirate regalia” — Henderson concluded with a request that Kansas teach “Pastafarianism” in its public schools. “I think we can all look forward to the time when these three theories are given equal time in our science classrooms across the country, and eventually the world,” the letter concludes. “One third time for Intelligent Design, one third time for Flying Spaghetti Monsterism (Pastafarianism), and one third time for logical conjecture based on overwhelming observable evidence.”

Since this letter, Pastafarianism has become an international phenomenon among secularists who share Henderson’s rather sarcastic sense of humor. A town council member in Dunkirk, New York, took the oath of office while wearing a pasta strainer on his head. An Austrian man successfully demanded the right to wear similar headgear in his driver’s license photo. The government of New Zealand officially granted Pastafarian clergy the right to perform weddings in 2015. A court ruling in Poland allowed the Church of the Flying Spaghetti Monster to apply for recognition as an official religion in 2014.

The biggest innovator in the field of secular trolling of government officials, however, is probably the Satanic Temple.

The Satanic Temple is not a devil-worshiping cult. Rather, it teaches a kind of defiant rationalism. “I identify nontheistically with a Miltonic Satan that defies all subjugation, exalts scientific inquiry and promotes Humanistic, pluralistic values,” Temple co-founder and spokesperson Lucien Greaves wrote in 2017. “The Satan of Modern Satanism,” Greaves added, “is a metaphorical icon for Enlightenment values.”

The trolling, often backed by the threat of legal action, has led governments to back off allowing invocations at official meetings. In 2016, the city council in Phoenix, Arizona, voted to end its practice of opening sessions with a prayer after the Satanic Temple demanded the right to deliver such an invocation. The ACLU represented a member of the Satanic Temple who sued the same Alaskan local government that eventually permitted Fletcher to deliver a Pastafarian invocation; the lawsuit claimed that excluding Satanists would run “afoul of the governmental obligation of neutrality.”

After Orange County, Florida, allowed a religious group to pass out Bibles at public schools, the Satanic Temple demanded the right to distribute The Satanic Children’s Big Book of Activities to the county’s students.

The Temple, however, is probably best known for its 8-foot-tall bronze statue of the pagan god Baphomet, a winged creature with a goat’s head, flanked by two adoring children.

The statue was originally built to sit alongside a Ten Commandments monument in the Oklahoma state capitol, but this plan fell through after the state Supreme Court ordered that monument removed in 2015. In 2018, the statue was briefly displayed before the Arkansas state capitol after that state passed a bill calling for a Ten Commandments monument to be displayed in its capitol.

It is likely that the biggest impact of the Satanic Temple’s activism is all the displays that were not erected and all the legislative sessions that were not opened with a prayer. After all, if a state government decides to use taxpayer dollars to celebrate Christianity, it risks having Baphomet come along for the ride.

Will the Supreme Court allow this to continue?

The open question is whether the Supreme Court’s increasingly conservative majority will allow groups like the Satanic Temple and the Church of the Flying Spaghetti Monster to invoke the doctrine of neutrality. And there are early signs that it might not.

In 2018, for example, the Supreme Court upheld President Trump’s travel ban — albeit after that ban was significantly watered down — despite the fact that Trump and his advisers were often quite explicit about the fact that the ban was intended to prevent many Muslims from entering the country.

Then, in its February order in Dunn v. Ray, the Court seemed to thumb its nose directly at the rule of neutrality. Dunn involved a Muslim death row inmate in Alabama who wished to have his imam present during his execution. The Court’s Republican majority allowed the execution to move forward without the imam in the execution chamber, despite the fact that Alabama permits Christian inmates to be comforted by a Christian pastor during an execution.

As Justice Elena Kagan wrote in dissent, the order appeared to be a direct attack on the principle that “one religious denomination cannot be officially preferred over another.”

Dunn sparked a massive backlash, even among conservatives. The National Review’s David French, for example, called it a “grave violation of the First Amendment.” And, in a later case involving a Buddhist inmate, the Court appeared to reaffirm the rule that people of all faiths must be treated the same by their government.

The Court’s majority, in other words, is giving off mixed signals about how they feel about the rule of neutrality. But there are good reasons for secularists to worry that the rule may not be enforced in the future. Indeed, it’s possible that the efforts of groups like the Satanic Temple could sour the Court’s new majority on neutrality.

If they are willing to tolerate inferior treatment of Muslims, imagine what they are likely to think about Satanists.

The 2019 Tonys were a damp end to one of the most exciting Broadway seasons in ages
Can Trump cancel the November election?
Walmart paid Wall Street investors $12 billion last year to keep them happy. Amazon paid $0.
Andrew Yang told Asian Americans to prove their Americanness. Here’s why that’s wrong.
Progressive Black candidates swept key races on Tuesday
The truth about violent crime in American cities, explained in 11 charts