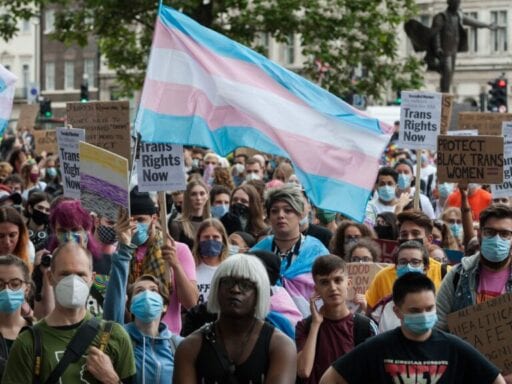 Share
Loading...
Transgender people and their supporters gather in Parliament Square to protest against potential changes to the Gender Recognition Act on July 4, 2020 in London. | WIktor Szymanowicz/NurPhoto via Getty Images

A proposed Housing and Urban Development rule would allow federally funded homeless shelters to judge a person’s physical characteristics, such as height and facial hair, in determining whether they belong in a women or men’s shelter, according to a copy of the rule’s text obtained by Vox. Advocates say this ultimately targets both trans women and cisgender women with masculine features, which could force them into men’s shelters and putting them at risk for potential harm..

The proposed ruled, which was first announced by HUD in a press release issued on July 1, would essentially reverse the Obama-era rule that required homeless shelters to house trans people according to their gender identity. While the new rule would bar shelters from excluding people based on their transgender status, it would also allow shelters to ignore a person’s gender identity — and instead house them according to their assigned sex at birth or their legal sex. In other words, a trans woman can’t be turned away from a shelter for being trans, but she can be forced to house in a men’s shelter.

Dylan Waguespack, a spokesperson for True Colors United, an advocacy group that focuses on supporting LGBTQ homeless youth, told Vox in early June that HUD Secretary Ben Carson is “talking out of both sides of his mouth.”

“They are trying to put forward this narrative in which transgender people are protected from discrimination, but in fact, when you read the proposal itself, it does the exact opposite,” he told Vox. “It creates unsafe conditions and unsafe barriers to housing and services for trans people in the midst of a global pandemic.”

The copy of the rule obtained by Vox has already passed congressional review, according to several sources familiar with the process, which is one of many steps needed before the text is released publicly. When asked about the text and status of the rule, HUD pointed Vox to their July 1 press release.

The rule’s language, according to the leaked text, states that single-sex shelter staff “may determine an individual’s sex based on a good faith belief that an individual seeking access to the temporary, emergency shelters is not of the sex, as defined in the single-sex facility’s policy, which the facility accommodates.”

In order to do this, HUD will allow shelter staff to take into account “factors such as height, the presence (but not the absence) of facial hair, the presence of an Adam’s apple, and other physical characteristics which, when considered together, are indicative of a person’s biological sex.”

In essence, the proposed rule encourages women’s-only shelter staff to use a visual appraisal of a woman’s appearance to judge whether that person is woman enough to use the facility.

If a shelter operator judges a homeless woman’s appearance to not fit what they believe is her assigned sex at birth, they would then be allowed to ask for proof of that person’s sex before housing her in the woman’s facility.

There are two main problems with forcing trans homeless people into spaces that correspond with their birth-assigned gender rather than their gender identity. The first is that such a policy exposes trans people, especially trans women, to potential violence and sexual assault inside those spaces. And as a result, trans people are more likely to choose sleeping in the streets rather than risk going to a shelter.

And while the rule is likely to fall hardest on trans women, it also opens the door to targeting butch women with more masculine presentations, as has already happened with gendered bathroom policing.

Waguespack told Vox Friday that Carson is showing a “willful disregard for the survival of transgender people,” and risks putting trans people in harm’s way. “He’s on the wrong side of history and the wrong side of the law,” he said. “It’s critical that trans people across the US hear the message loud and clear that they are legally entitled to gender-appropriate homelessness services under the law.”

Democratic lawmakers have pushed back on the proposed rule

The proposed HUD rule is the latest in a long line of anti-trans policies rolled out by the Trump administration. Almost immediately after he took office in 2017, the administration rolled back an Obama-era memo for schools to fairly treat trans students. Then in July of that year, Trump announced he would be ordering the military to ban trans people from serving. The administration went after trans prisoners as well in May 2018, deciding that in most cases, trans people should be housed according to their assigned sex at birth.

Perhaps most critical was the administration’s attack on LGBTQ nondiscrimination protections in the Affordable Care Act, finalized in a new rule on June 12.

Even though it has yet to be released, the HUD rule has already received congressional pushback. In a letter to HUD Secretary Ben Carson dated June 29, Rep. Jennifer Wexton (D-VA) and Rep. Maxine Waters (D-CA) urged the agency to reconsider the release of the HUD rule because of the Supreme Court decision in Bostock v. Clayton County on June 15, which held that discrimination against trans people is considered sex discrimination.

“The release of a potentially applicable Supreme Court decision during the period of our regulatory review is unique and raises concerns about the applicability and implementation of the proposed rule,” reads Wexton and Waters’s letter.

Carson responded to the lawmakers with a letter of his own on July 13, which was obtained by Vox, rejecting the premise that Bostock would apply to the proposed rule. “[A]n individual’s sex is relevant in the specific category of cases covered by the Department’s proposed rule, which is concerned with single-sex temporary or emergency shelters,” read the letter. “These facilities, by virtue of their temporary nature, are not deemed ‘housing’, do not fall within the purview of the Fair Housing Act. Therefore they may lawfully elect to serve only one sex. We note that the Bostock decision assumed that ‘sex’ referred ‘only to biological distinctions between male and female.’”

Carson goes on to claim that the existing rule, which requires shelters to house trans people according to their gender identity, “permits any man, simply by asserting that his gender is female, to obtain access to women’s shelters.”

Associating vulnerable trans women with predatory men is a classic anti-trans dogwhistle. In truth there’s no evidence of wide-scale instances of men posing as trans women just to enter women’s spaces. Instead, advocates say the opposite is true — that putting trans women in men’s shelters is a recipe for harassment and potential assault.

Even the rule’s text admits that there’s little proof that trans women are a threat to cis women in women’s shelters. “While HUD is not aware of data suggesting that transgender individuals pose an inherent risk to biological women, there is anecdotal evidence that some women may fear that non-transgender, biological men may exploit the process of self-identification under the current rule in order to gain access to women’s shelters,” reads the proposed rule.

Carson and Wexton have had a lengthy — and public — back and forth on trans issues, stemming back to a May 2019 hearing of the House Financial Services committee in which the lawmaker asked Carson whether the agency had any plans to change the Equal Access Rule, which currently requires homeless shelters to house trans people according to their gender identity. At the hearing, Carson said there were no plans to do so, but the very next day the agency announced its intention to change the rule.

One day after @SecretaryCarson told me he isn’t anticipating any changes to protections for LGBTQ people in shelters, HUD announced a proposal to gut that very rule.

He either lied to Congress or has no idea what policies his agency is pursuing. Either way, it’s unacceptable. pic.twitter.com/zn99sEKvth

In an October 2019 HFSC hearing, Wexton challenged Carson over comments in which he called trans women “big, hairy men” at an internal meeting with HUD staff in San Francisco a month earlier. Carson refused to apologize, instead decrying “political correctness.”

On Friday, Wexton again clashed with Carson over the proposed rule in responding to his letter. “Secretary Carson’s insistence on pressing forward with this discriminatory policy — despite the Bostock ruling and clear consensus among experts and service providers opposed to this rule change — betrays a disturbing determination to target and endanger trans Americans,” she said in a statement to Vox. “The Secretary has made one bad faith argument after another to try and push this anti-trans rule forward, and the weak justifications he makes in this letter are no different.”

Once the HUD rule is published in the Federal Register, it then goes up for public comment for 60 days. One of the issues HUD is asking for public comment on is what physical characteristics should a shelter operator be able to use to judge a person’s “biological sex.”

Advocates say this asks the public for thoughts on how shelter operators might legally spot a trans person. “The idea that there could be a list of characteristics for an intake staffer at a homeless shelter to refer to in order to decide where someone will be forced to sleep — or even decide if they can access shelter at all — is Orwellian at best and at worst, reminiscent of early 20th century eugenics,” said Waguespack.

Trump strikes a bitterly vindictive tone during National Prayer Breakfast speech
Abolish the lame-duck period
How a homemaker with no political experience took on Europe’s longest-serving dictator
Iran’s coronavirus outbreak has hit the highest levels of government
Joe Biden responds to allegations: He “never” acted inappropriately around women
The essential kindness of Bill and Ted