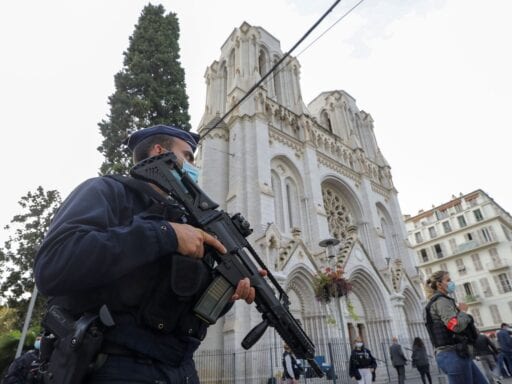 Three people were killed at the Notre Dame Basilica.

The killing of three people in southern France on Thursday has been deemed a terrorist attack by French officials — and it looks to be related to the country’s ongoing controversy over the public display of cartoons depicting Islam’s Prophet Muhammad and the government’s general approach toward Islam.

Around 9 am local time Thursday in Nice, an assailant used a knife to kill three people, two women and a man, at the Notre-Dame Basilica. One of the women, who was reportedly 70, died inside the church, as did the man; the second woman “fled to a nearby bar but was mortally wounded,” according to the AP.

Nice Mayor Christian Estrosi told reporters he believes the attack was perpetrated by an Islamist extremist. “He cried ‘Allah Akbar!’ over and over, even after he was injured” by police, Estrosi said. (“Allahu akbar,” Arabic for “God is great,” is a common expression used by Muslims, especially during prayers.) “The meaning of his gesture left no doubt,” Estrosi added.

The suspect is now in custody and has been hospitalized.

Two other incidents occurred on Thursday, the same day some Muslims observe Mawlid, a celebration of the Prophet Muhammad’s birthday. In Montfavet, also in southern France, a man was shot dead after threatening police with the gun he held. And in Saudi Arabia, a guard outside France’s consulate in Jeddah was attacked with a knife. The guard is now hospitalized and the suspect is under arrest.

In response to the Nice attack and the other incidents, the French government has increased the nation’s security alert to its highest level and grown the number of troops protecting schools and religious sites from 3,000 to 7,000. French President Emmanuel Macron, after visiting the scene in Nice, issued a stark message: “I say this with the outmost clarity — we will not give in to terrorism.”

Leaders in several Muslim-majority countries, including Saudi Arabia, Egypt, and the United Arab Emirates, have condemned the Nice attack. “Under no circumstances are these attacks justifiable,” Egypt’s highest religious authority, Al-Azhar, said in a tweet, calling them “inconsistent with the tolerant teachings of Islam and all divine religions.”

Earlier this month, a suspected Islamist extremist beheaded Samuel Paty, a 47-year-old secondary-school teacher, as he walked home from school.

That was days after Paty had, as part of a class discussion on freedom of speech, showed his 12- to 14-year-old students two caricatures of Muhammad that had been published by the satirical magazine Charlie Hebdo — the same images that in 2015 inspired jihadists to kill 11 staff members at the magazine and six others in Paris.

Police found a Twitter account suspected of belonging to the assailant that featured a picture of the severed head along with a message: “I have executed one of the dogs from hell who dared to put Muhammad down.”

Macron’s government turned Paty into a freedom-of-expression hero. At a national memorial for the slain teacher last week, Macron said that France “will continue the fight for freedom” and “intensify” efforts to end Islamist extremism in the country.

He also said France would continue to back anyone who wanted to display cartoons of Muhammad, noting his nation’s deep culture of secularism. His goal is to encourage an “Islam of France,” as the president has put it for years, that aims to seamlessly integrate Muslims into French society.

Last week, French police raided numerous homes across France as part of its probe into Paty’s killing. About 15 people have been taken into custody and 51 Islamic organizations are under investigation.

The aftermath of the Paty killing has rekindled a contentious debate in France about how to balance freedom of expression with respect for a religion. The Nice attack will only add fuel to the fire.

“The point of terrorism is to shock, incite tensions and block this discussion,” said Charles Thépaut, visiting fellow at the Washington Institute for Near East Policy think tank in Washington, DC.

Estrosi, Nice’s mayor, has already called for a harsher government response. “Enough is enough,” he said. “It is now time for France to exempt itself of peacetime laws to permanently annihilate Islamo-facism from our territory.”

New shenanigans are afoot in Michigan as Trump tries to block certification of Biden’s win
Most Americans believe Trump lied to them, but think impeachment is a bad idea
The $15 minimum wage bill has all but died in the Senate
What the Katie Hill story means for young women in public life
Trump’s claim that only immigrants with “the lowest IQ” follow the law was unconscionable
The Trump administration already made huge refugee cuts. It’s making more.