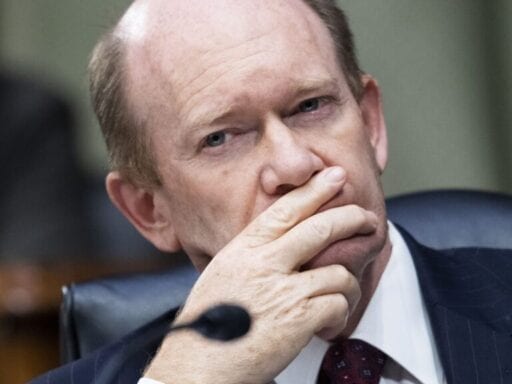 One of the Senate’s most outspoken defenders of the filibuster is having second thoughts.

Sen. Chris Coons (D-DE) is one of the Democratic caucus’s most vocal defenders of the filibuster — or, at least, he has been in the past. But in a recent interview, Coons expressed openness to eliminating the filibuster if Republicans push too hard to sabotage a potential Biden administration.

As pressure has grown for Democrats to support rules changes that would allow legislation to pass the Senate with a simple majority vote, rather than require 60 votes to break a filibuster, Coons warned his fellow Democrats to tread cautiously.

In an interview broadcast on CNN shortly after the 2016 election, Coons said that he regretted voting to allow most presidential nominees to be confirmed by a simple majority vote. Then, in April 2017, Coons and Sen. Susan Collins (R-ME) organized a letter signed by 61 senators, which called on Senate leadership to “preserve existing rules, practices, and traditions” that allow senators to filibuster legislation.

But a Politico profile of Coons published Tuesday indicates that his views on the filibuster are evolving. Though Coons does not outright reverse his previous opposition to abolishing the filibuster, he now accepts that filibuster reform might be necessary to prevent Senate Republicans from undermining a potential Biden administration.

“I will not stand idly by for four years and watch the Biden administration’s initiatives blocked at every turn,” Coons told Politico. “I am gonna try really hard to find a path forward that doesn’t require removing what’s left of the structural guardrails, but if there’s a Biden administration, it will be inheriting a mess, at home and abroad. It requires urgent and effective action.”

Sean Coit, a spokesperson for Coons, confirmed to me that the senator’s statement to Politico reflects his evolution on filibuster reform. The Politico statement “reflects [Coons’] perspective, which is that there is real urgency to pass legislation on several different fronts,” Coit told me. “And by the time a Biden administration would begin, the urgency would be even more intense. As he said, he’s going to try and find a bipartisan way forward, but some of these issues can’t wait.”

Coons’s openness to additional filibuster reform appears to be a recent development: When I spoke to Coons while reporting in late February, he emphasized his fear that tearing down more of the Senate’s longstanding norms could have painful long-term consequences.

Eliminating the filibuster, Coons warned me then, is the “one last step” that Trump keeps pushing Senate Majority Leader Mitch McConnell to make a reality. And “as soon as the legislative filibuster is gone, and one party controls both houses, it gives them unprecedented power to move legislation.”

Coons has often operated from a place of procedural conservatism. If Democrats fight the GOP’s pattern of tearing down longstanding norms governing the legislative process by also going after those norms, Coons told me in February, they might not like the long-term results. “You know what happens when you fight fire with fire?” he asked rhetorically. “You burn the house down.”

But now, even he appears to believe that the twin crises of a pandemic and a severe economic downturn require a Congress that can act. And if Republicans block that action, Coons says he “will not stand idly by” and allow such obstruction to happen.

A common metric used to measure how often the minority party uses the filibuster to frustrate the majority is the number of “cloture” motions filed by the majority. Cloture is the process used to break a filibuster in the Senate.

The idea of the so-called “nuclear option,” a process that allows the Senate to change its rules with a simple majority vote, has been around since at least 2005 — when Republicans threatened to deploy the nuclear option to end Democratic filibusters of some of President George W. Bush’s judicial nominees. But Democrats largely used the filibuster to pressure Bush to replace nominees they viewed as particularly extreme with more moderate candidates for the bench.

In 2013, by contrast, Republicans used the filibuster to effectively block anyone that President Obama nominated to fill certain seats — including three seats on the powerful US Court of Appeals for the District of Columbia Circuit. Frustrated by this tactic, many Democrats who had previously defended the filibuster, including Democrats who opposed the nuclear option in 2005, changed their mind and agreed to alter the Senate’s rules to allow Obama’s nominees to be confirmed by a simple majority vote.

“I am very open to changing the rules for nominees,” then-Sen. Barbara Boxer (D-CA) told HuffPost just days before Democrats voted to invoke the nuclear option. “I was not before, because I felt we could work with [Republicans]. But it’s gotten to an extreme situation where really qualified people can’t get an up-or-down vote.”

There are two lessons to be gained from this history. One is that, now that a precedent has been established allowing the Senate to change its rules with a simple majority vote, the filibuster exists only because a majority of the Senate wants it to exist. If 51 senators agree to eliminate the filibuster in its entirety, nothing can stop them.

The second lesson is that frustration matters. Senators who previously staked out strong positions against filibuster reform may change their minds if the minority party pushes too hard to obstruct the majority’s agenda.

At the very least, Coons appears to be warning Republicans that his patience with such obstructionism has limits.

These trans women are taking states to court for the right to legally change their names
The $35 million play to fix Democrats’ data problem is shutting down
China just warned it would hit back at Trump with even more tariffs
It’s okay to feel hope
A negative Covid-19 test isn’t an all-clear
What Kelly Reichardt learned from directing First Cow, her gentle masterpiece