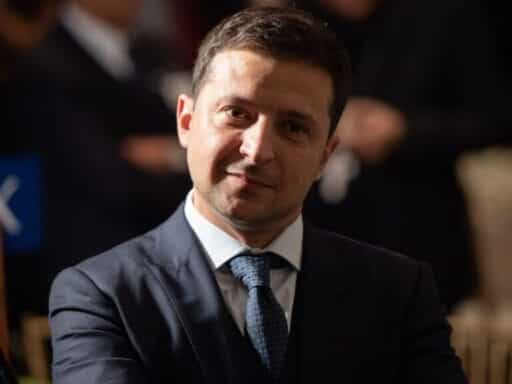 At the center of the latest scandal threatening to take down President Donald Trump is a comedian who just became president of his country four months ago.

The current crisis has to do with whether Trump improperly used his position to try to coerce Ukrainian President Volodymyr Zelensky into investigating Trump’s 2020 political opponent, former Vice President Joe Biden — perhaps by withholding military aid to the Eastern European country until it agreed.

Trump has admitted to discussing Biden with Ukraine, but he maintains that a phone call he had with Zelensky last month was “a very friendly and totally appropriate call.”

Zelensky, who has yet to comment publicly on the matter, is an unlikely character in Trump’s wild tale. Surely the comedic actor-turned-world leader didn’t expect to be cast in an international drama by the kind of wealthy man he has sworn to fight against — but here he is.

Here’s a brief guide to what you need to know about Ukraine’s president.

Who is Volodymyr Zelensky?

Zelensky, 41, made his name on Servant of the People, a Ukrainian comedy show that follows the life of an everyman schoolteacher who unexpectedly becomes president and takes on the nation’s oligarchs. That was the extent of his “political experience.” But he struck a populist, anti-corruption message during his country’s presidential campaign that clearly resonated with millions of Ukrainians suffering from poverty and government graft.

It helped him hold a commanding lead in polls leading up to April’s election, ultimately winning with a staggering 73 percent of the vote and defeating incumbent Petro Poroshenko in the process.

Zelensky — or “Ze,” as he’s more popularly known — has aimed to bring the values of his character to Ukraine’s presidency. In May, just minutes after officially becoming president, he dissolved Ukraine’s Parliament in an effort to consolidate power, which he said would help him stamp out corruption.

But he also holds many conventional views for a modern-day Ukrainian leader. He’s mainly pro-Western, wants Ukraine to enter the European Union, and seeks NATO membership for his country. He also called for negotiations with Russian President Vladimir Putin to bring an end to the military fighting in eastern Ukraine sparked by Moscow’s 2014 incursion.

The biggest thing voters want him to deal with, though, is the country’s struggling economy.

A World Bank chart below showing Ukraine’s massive dip in gross domestic product per capita starting around 2013 illustrates this point. And while the country has been experiencing a bit of growth lately, Ukraine is still among Europe’s poorest — if not the poorest — countries.

In February, Ukraine’s then-finance minister said that if the country grows at the same economic rate for 50 years — a big if — Ukraine will have the same economic strength as Poland. That, to put it mildly, isn’t an optimistic outlook it may take a half-century to become a European economic success story. The country’s troubles have led millions of Ukrainians to flee in search of a better life.

And Zelensky doesn’t come without controversy of his own. Many worry about how close he is to a Ukrainian oligarch: Ihor Kolomoisky. Zelensky’s show appeared on Kolomoisky’s TV channel, and the billionaire has long been a rival of Poroshenko, the incumbent president Zelensky defeated. Some are concerned that the comedian may simply be a tool of another Ukrainian fat cat trying to wield power, a charge Zelensky denies.

So between trying to fend off Russia, corrupt politicians, rumors about his ties to oligarchs, and a sputtering economy, being sucked into Trump’s troubles was the last thing Zelensky needed. But if anyone can get out of made-for-TV sticky situations, a TV comedian can.

Congress is writing up Biden’s stimulus plan. Here’s what’s in it.
The joy and uneasiness of an empty museum
Demand for meatless meat is skyrocketing during the pandemic
We know how to prevent up to 40 million people from being evicted. It’s up to Congress to do it.
How Beethoven’s 5th Symphony put the classism in classical music
5 races to watch in Tuesday’s West Virginia election