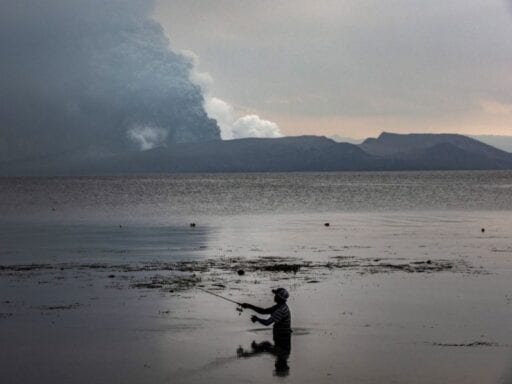 Share
Loading...
The Taal volcano in the Philippines sent a plume of ash miles into the air as it erupted on Sunday. | Ezra Acayan/Getty Images

The Taal volcano has already forced thousands to flee.

Philippine authorities are warning that a large, dangerous eruption from the Taal volcano may be imminent after a towering column of ash spewed from it Sunday, forcing 30,000 people to evacuate.

The dusty ash has already reached the capital, Manila, more than 40 miles north of the eruption, and lava began to flow early Monday. The plume was more than 9 miles tall and triggered lightning, as you can see in this time-lapse footage gathered by the BBC:

The eruption was even visible from space.

The #Himawari8 ️ viewed yesterday’s #eruption of the #TaalVolcano via a combination of visual and infrared bands. The #volcano is the second most active in the #Philippines, and spewed #ash more than nine miles into the air. #Taal #TaalVolcano2020 #TaalEruption2020 pic.twitter.com/AteVvj5dM1

The eruption triggered 144 earthquakes in the region and continues to pose risks to people on the ground and in the air, according to the Philippine Institute of Volcanology and Seismology (PHIVOLCS).

“Population in areas in the southwest are advised to guard against the effects of heavy and prolonged ashfall,” according to a Monday bulletin from PHIVOLCS. “Civil aviation authorities must advise aircraft to avoid airspace around Taal Volcano as airborne ash and ballistic fragments from the eruption column pose hazards to aircraft.”

More than 500 flights have been diverted so far to avoid the eruption. About 450,000 people live within a 9-mile radius of Taal, and authorities issued total evacuations orders for the region. But some locals had trouble leaving the area because they lacked transportation and because the ash from the volcano led to poor visibility.

Taal is the second-most-active volcano in the Philippines and is one of the smallest in the world. Officials raised the alert level for the volcano to 4 on a scale that goes up to 5. A rating of 4 indicates that a hazardous eruption is imminent, characterized by ash explosions, lava flow, and earthquake clusters. It’s unclear when a larger, more explosive eruption could take place, but such an event could send rocks, ash, and lava for miles, authorities warned.

Volcanic activity is nothing new in the Philippines, and the country has a history of major eruptions. There are 53 active volcanoes throughout the country.

In 1991, Mount Pinatubo erupted and spewed so much ash that it cooled the whole planet. More recently, Mount Mayon, the most active volcano in the Philippines, erupted in 2018 and remained active for almost three months.

A big reason the Philippines has so many volcanoes is its location. The Philippines is located in the Ring of Fire, a 25,000-mile chain along the edges of the Pacific Ocean that is notorious for seismic and volcanic activity. This region aligns with the boundaries of tectonic plates, where the movement of these plates can trigger tremors and create pockets of molten rock that form volcanoes.

Donald Trump is continuing his feud with John McCain — even after McCain’s death
BuzzFeed’s Jonah Peretti on why he bought HuffPost and why the New York Times can’t be “the paper of...
Asian Americans are seeing unprecedented outreach — but campaigns could still do better
The Harvey Weinstein jury deliberations so far, explained
India may soon strip millions of immigrants of their citizenship
What we can learn from the “second wave” of coronavirus cases in Asia