Affordable housing is disappearing. So cities are designating parking lots to sleep in. 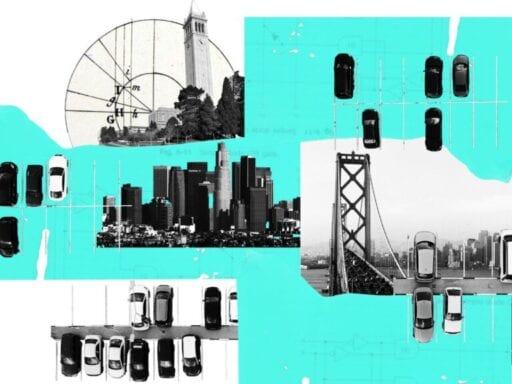 People slipping in and out of homelessness need “safe” parking lot programs like these.

The policy: Parking lots for people who live in their cars

Where: Up and down the West Coast

The housing affordability crisis — most acute in the Bay Area, but stretching up and down the West Coast — has helped exacerbate a homelessness crisis in states like California, Oregon, and Washington. Many people who are no longer able to afford or find stable housing are now forced to spend their nights sleeping in the one major asset they have left: their cars.

“These folks by and large have not made any choice to experience homelessness,” said Cassie Roach, the program coordinator and senior case manager at New Beginnings Counseling Center in Santa Barbara. “They haven’t chosen to do drugs or make poor financial choices, and they’re not all alcoholics or any of those biased and ignorant assumptions people make. It tends to be folks that are dealt a really difficult hand; they’re making the best of a bad situation.”

In Los Angeles County, for example, 71 percent of people who are first experiencing homelessness cite economic reasons, according to Gary Dean Painter, the director of the Homelessness Policy Research Institute and a professor at the University of Southern California. About a third of people in the county pay half their income in rent, making them vulnerable to losing their homes when they have a negative shock to their finances. “I point a finger at the economy and housing market,” Painter said.

People who live in their cars are more likely to have been recently living in permanent housing and have some kind of income, making them a unique population that may not require or be able to use the same types of services other people experiencing homelessness do.

“This is a population we should think strategically about,” Painter said. “They’re not a high cost population to serve, they don’t have an accumulation of challenges, [but] they’re experiencing something they’ve never experienced before in their lives, they likely don’t know any of the services available to them.”

On any given night in Santa Barbara or its neighboring city of Goleta, around 150 people who are living in their cars post up in otherwise undistinguished parking lots for the night. The biggest of the 24 lots has 15 spots for people, while most have only around six. They aren’t allowed to place any belongings or tents outside their cars. “It’s a safe place to be at night,” said Roach, whose homelessness organization has a contract from the city of Santa Barbara to run the Safe Parking program. The lots’ locations are not publicized, Roach said, so “we don’t invite neighbor scrutiny or NIMBYism; we don’t want to attract people who have ill will towards people with homelessness.”

While it’s not a stable home, designated safe parking lots are spaces for people who live in their cars that don’t draw the ire of residents or the prying eyes of police officers handing out tickets. But they do require about an hour of intake “to really drill down on what their current situation is and how they got to this situation and where they want to go in the future,” Roach explained, adding that this allows them to determine what benefits parkers might be eligible for and to connect them to other resources in the area.

Programs exist currently in several West Coast communities, including East Palo Alto, Eugene, and Los Angeles. The Santa Barbara safe parking program has been around since 2004 and has fast become a model for cities that have seen larger populations of people living in their cars. They even have a manual for other cities that want to start their own programs. “We get calls all the time from other communities that want to start the program,” Roach said.

“I think of it as a new shelter model, they have an asset — their vehicle — and it makes sense to provide a shelter model that accommodates those kinds of individuals,” Rashi Kesarwani, a Berkeley City Council member, said.

Kesarwani’s district has a “particularly high concentration” of people living in RVs and a large overall homeless population. He has had to deal with the competing interests of residents who don’t want to see public streets turn into permanent encampments while still being compassionate with those people living out of vehicles, many of whom have connections to the region and some of whom have children in Berkeley schools.

“We have found that having no limits on … public streets is not healthy or safe for anyone,” Kesarwani said, noting that people are living without access to sewage or electricity.

“They’re not all dumping sewage into a storm drain. … We’ll hear complaints about trespassing into private property to use someone’s hose or electrical outlet, that creates a situation that’s unmanaged, we need to give people a place to be, for people who can move on or a place to live in their RV safely.”

But just as it’s not easy to find housing in the Bay Area, it can be hard to find parking, especially for those who aren’t going to pay. “Berkeley is challenged because we don’t have a lot of really large city-owned parking lots,” Kesarwani said. He added that while they were working with the city manager to find sites for up to 20 RVs, Kesarwani said that priority would be given to people who had previous permanent housing in Berkeley, had children in Berkeley schools, or worked in the city.

The safe parking plans are combined with a new ban on street RV parking between 2 am and 5 am. The combination of new enforcement with new resources, Kesarwani said, was an effort to “reconcile with Berkeley values.”

Safe parking programs, Painter said, are often a natural response to high rates of people living in their vehicles. “You can easily imagine that in a city you don’t want your streets ‘taken over’ by RVs, so why not provide space that isn’t utilized to be safely parked and potentially connected to appropriate services that these families might need?”

Beaverton, a Portland-area city with around 100,000 people, launched its own safe parking in April for six vehicles over two sites, said Megan Cohen, Beaverton’s community services coordinator. The city is looking to expand to five sites with a total capacity for 15 cars. “We see a lot of older men who maybe are on Social Security or have a fixed income that no longer are able to meet their rent,” she said. “We’re also seeing families that aren’t able to afford rent anymore, and we’re able to wrap several services around them to get back into housing.”

According to the University of Southern California Homelessness Policy Research Institute, safe parking programs can lead from anywhere to 5 percent to 70 percent of their clients obtaining housing after using them.

This is the key potential these programs have, Painter explained. “It’s really an opportunity to have that first intervention for a large set of folks that likely won’t need a lot of services, but just a reconnection to job placement or something else that might be able to resolve [their lack of income] and move them back into permanent housing.”

But the scope of homelessness in California and the West Coast as a whole requires large-scale government intervention. “I understand why [the homelessness crisis] is happening,” Kersawani said. “I have full compassion and concern for how serious the shortage of affordable housing is,” she said.

“This is a massive problem that needs massive intervention,” Painter argued. “What hasn’t been talked about nearly as much is what to systematically do with populations living in their cars.”

Measles cases have hit a record high in Europe. Blame austerity.
3 of Trump’s signature immigration policies are on the line at the Supreme Court
The Supreme Court just stripped thousands of teachers of their civil rights
Joe Biden wins the Alabama primary, picking up another Southern victory
What happens next in the coronavirus outbreak? We mapped 8 scenarios.
Flashback: Sen. Hirono asked Kavanaugh about personal sexual misconduct during his hearing