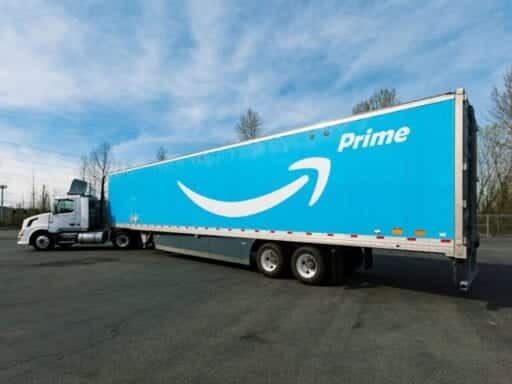 Share
Loading...
Amazon Prime promises one-day and two-day shipping — after the item leaves the warehouse, that is. | Amazon

Amazon says it’s “off to a record-breaking start to the holiday season,” but some customer delivery times are paying the price.

The tech giant acknowledged on Thursday that some customers’ orders are experiencing shipping delays as the company battles high demand and winter storms.

“We are off to a record-breaking start to the holiday season and on peak shopping days, delivery promises vary and may be longer than normal based on order volume and the fulfillment and delivery capacity available in a given area,” a spokesperson said in a statement to Recode. “The winter storms that swept across much of the country at the same time also extended delivery times in some areas. We will work directly with customers who are experiencing an issue with their delivery.”

The explanation from Amazon comes as Amazon Prime members, who pay $119 a year in the US for express shipping and other perks, have been flooding the company’s Twitter and Facebook accounts this week with complaints of shipping delays.

On Thursday, Amazon posted a message on its Facebook page thanking Prime members for making 2019 a big year for the shipping and entertainment service. But the post was met by tons of angry comments from customers.

“I’m so glad I pay for prime so it can take in-stock items 6-7 days to arrive,” one of them read. “I can order from Target or Walmart with free shipping and I have my order in 2 days. Your excuse about high order volume is pitiful. You knew the holidays were coming all year and should have hired extra staff to accommodate the order volume. Prime members are paying for service you can’t provide and should all be refunded.”

On Twitter, customers also complained of abnormally extended delivery dates for Prime orders. In responses on social media, Amazon representatives clarified for customers that Prime’s one-day and two-day shipping promises start from the time an item leaves a warehouse, rather than from the time an item is ordered. That distinction is one that Amazon does not typically highlight when marketing the service to customers.

“Some dope from @amazon trying to tell me that the item I’ve been waiting over a week for isn’t really late because 2-day Prime shipping is just how long it takes once it ships,” a Prime member wrote on Twitter. “Haha. Nice try.”

Amazon Prime has long been the key to Amazon’s retail success, with members that shop more frequently and spend more on Amazon than non-Prime members do. But the core express shipping perk is experiencing new competition from traditional retailers like Walmart and Target, which have been making more products available for two-day shipping — and in some cases one-day shipping — without asking customers to pay a membership fee. Amazon said earlier this year that Prime’s shipping speed was transitioning from two days to one day for many items over the course of the year.

This holiday season marks the first one Amazon is going through without a major delivery partner it’s had in the past: FedEx. The shipping company said this summer that it was not extending its ground-delivery deal with Amazon, which worked with FedEx for years but relied on the carrier less than UPS, the United States Postal Service, and its own delivery network, called Amazon Logistics.

Amazon has been handling more and more shipments through Amazon Logistics since a 2013 holiday season fiasco where shipping partners like UPS were overwhelmed with Amazon shipments and tons of Amazon orders arrived late after Christmas. Earlier this year, Rakuten Intelligence said that Amazon was handling as much as 45 percent of its US shipments through the Amazon Logistics service, which is comprised of a sprawling network of delivery partners.

Amazon’s statement did not make it clear which of the factors causing shipping delays was the biggest: overwhelmed Amazon warehouses, which have come under fire for worker injury rates; Amazon Logistics or other shipping carrier issues; or simply the weather.

The third Democratic presidential debate, explained in under 30 minutes
Why some colleges win against Covid-19, and others lose
Florence County, South Carolina, shooting of 5 police officers: what we know
5 questions about labor strikes that you were too embarrassed to ask
4 winners and 2 very big losers from this year’s lackluster VMAs
Alexander Vindman is the latest impeachment inquiry witness to give damaging testimony for Trump