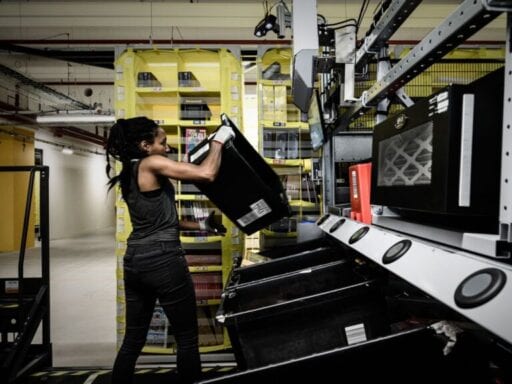 Workers lifting hundreds of boxes a day say they fear being fired for missing work, and are demanding time off like other part-time workers.

More than 30 Amazon workers at a Sacramento warehouse walked off the job Monday morning, demanding they receive paid time off.

Around 2:45 am on Monday local time, 36 workers — out of around 100 in total on the shift— left work two hours early after they read a letter to management out loud stating their demands to be granted paid time off (PTO) and meet with management to discuss their concerns, according to a worker at the site.

These workers — who say they lift hundreds of packages a day in “back-breaking” labor —currently receive zero PTO days a year. The walkout comes weeks after workers say management has ignored their requests to meet with leaders of a group organizing around the issue. So far, workers have circulated an internal and public petition gaining over 4,000 signatures in total. The actions have been organized by a group of workers on site called Amazonians United Sacramento, which led a successful campaign in the past to get multiple colleagues reinstated who were fired for missing work, in one case while the colleague was suffering the loss of a family member.

The recent walkout is also an escalation of labor tension at Amazon’s growing network of last-mile delivery centers, which are smaller warehouses where workers prepare packages that are then sent out to customers’ doorsteps. Most workers at the Sacramento site — as with those at other delivery stations across the US — are prohibited from working more than 30 hours a week. They often work up to that maximum amount allotted; sometimes more than that during peak shopping times. Workers say their shifts are physically grueling, involving lifting boxes of up to 50 pounds at rapid pace, especially right before the holidays when they see their workload increase.

Workers’ public letter also calls for Amazon’s local management team to meet with representatives from Amazonians United Sacramento, which has turned into the de facto organizing group for workers at the warehouse. Currently, the group says it operates as an independent worker organization not affiliated with any union.

The Amazon spokesperson did not respond in time for publication to a follow-up request for comment about the walkout, or why several weeks after the initial petition, management has still not met with its organizers.

Amazonians United Sacramento is one of several worker-led groups that have organized in recent months at Amazon’s delivery stations, and it has had some recent successes in petitioning for better working conditions. In July, a group of workers in Chicago called Amazonians United DCH1 publicly came forward demanding rights for workers, including health care benefits and air conditioning on site. They had an early win when management agreed to send workers home with pay during a sweltering heat wave that they say made it unsafe to work.

Update 12/23/2019: This article and headline has been reflected to include the worker walkout which took place on Monday morning.

Trump is the “wrong president for our country”: Read Michelle Obama’s full speech
The robot revolution will be worse for men
The surreal — yet normal — start to Amy Coney Barrett’s Supreme Court confirmation hearing
Parasite’s Best Picture win was a major milestone for the Oscars. Here’s 5 more.
How scientists are learning to predict your future with your genes
Trump once flirted with white nationalism. Now it’s a centerpiece of his White House.