Americans are working harder these days. Their paychecks don’t show it. 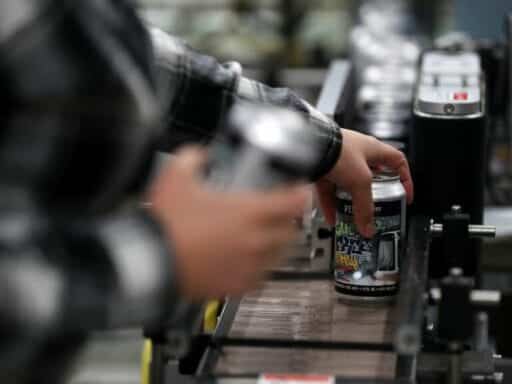 Productivity is up and unemployment is low. So why aren’t workers benefiting yet?

Americans are working harder these days, but it’s not paying off like it used to.

In the first three months of 2019, employees got so much more work done that they smashed productivity forecasts.

Labor productivity in the non-farm business sector (the biggest part of the US economy) grew 2.4 percent compared to the same period last year, according to new estimates from the US Department of Labor.

That’s the highest jump in nearly a decade, and is slightly above the average quarterly growth rate for most of the post-World War II period. Under a different measure, which compares annual growth to the previous quarter, productivity grew 3.6 percent, the highest in at least four years.

Business investment in technology is certainly making workers more efficient, but that doesn’t explain such a jump in productivity at a time when capital spending growth is falling.

What these numbers do tell us: Engineers, bartenders, supermarket cashiers, and other private sector employees are working harder than they have in the past few years. While productivity fluctuates each quarter, no matter how you measure it, it has been steadily rising overall since 2016.

That’s great for businesses (they earn more money), and for the economy (GDP grows faster). The problem is that companies aren’t rewarding their employees for the extra hard work.

Just look at the table below. Business employees and factory workers were more productive, worked longer hours, and produced more goods and services than they did last year. But their real hourly wages, which are adjusted for inflation, barely inched up. And real hourly pay for factory workers actually fell during that time.

This is not the way the economy is supposed to work. Paychecks are supposed to grow faster when productivity rises this fast and unemployment falls this low. That’s the basis of free market economics. It’s the theory that businesses will pay employees more when they produce more, and that they’re willing to pay higher wages when it’s harder to find employees.

But that’s not happening. And few economists seem interested in the underlying reason families are struggling: American companies are simply stingier than ever. The latest productivity data is more evidence of that.

The recovery from the Great Recession changed everything

Economists have been fretting about the so-called “wage puzzle” during the current economic expansion. It’s been hard for them to explain why wages haven’t been growing as fast as they did in the 1990s, when unemployment was also super low.

There are lots of theories. One reasonable view is that productivity isn’t rising much either.

For most of the post-WWII economy, wages grew almost in lockstep with productivity, according to Jason Furman, a former economic adviser to President Barack Obama. But after 2000, productivity slowed, he explained in an essay last year, so it’s not all that surprising that employers aren’t paying workers much more.

“Greater productivity growth holds the potential of being the most powerful source of sustained wage growth across the income spectrum,” he argued.

Now that productivity has spiked, we still aren’t seeing the magical rise in wages, based on these new estimates. It’s possible that the spike is temporary — not part of some bigger trend. That’s a reasonable view.

But there’s another sign that businesses are extra tight-fisted these days. The latest data shows that the rise in labor costs is slowing while employee productivity is speeding up. Usually it’s the other way around. When productivity rises, so do labor costs, because employers generally raise wages to reward employees.

But for working-class Americans, the economic theories for why they can’t get ahead are irrelevant. What matters is that today’s economy is forcing workers to go on strike to get a decent raise.

A record number of workers are striking

Frustration over stagnant wages is also the major underlying factor behind widespread worker strikes across the country in places like California, Illinois, and Missouri. Last month, 31,000 supermarket employees went on strike in the Northeast to reverse proposed pay cuts and rising insurance premiums. The Stop & Shop strike in mid-April was the largest private sector work stoppage in years. After eight days with empty supermarkets, the company agreed to scrap its plan.

Last year, a record number of US workers went on strike, according to data released in February by the US Bureau of Labor Statistics. A total of 485,000 employees were involved in major work stoppages in 2018 — the highest number since 1986, when flight attendants, garbage collectors, and steelworkers walked off the job.

Angry schoolteachers in West Virginia launched the first major strike in January 2018. About 35,000 educators and staff walked off the job to protest a 1 percent pay raise, which they said was inadequate. The stoppage ended up shutting down every public school in the state for a week until state lawmakers agreed to give them a 5 percent raise and to temporarily freeze health insurance premiums.

Teachers in six other states soon followed, and by the end of the year, Marriott workers were picketing in four states.

Working-class Americans haven’t been this fed up with their employers since the 1980s, as this chart shows:

Some economists are confident that wages will start to pick up if employees continue to revolt. “[T]he sharp increase in the number of working days lost to strikes over pay and benefits over the past year suggests that employees increasingly recognize that the balance of power has shifted in their favor,” Ian Shepherdson, chief economist for the research firm Pantheon Macroeconomics, wrote Friday in an analysis.

It shouldn’t be this hard to get a raise.

Bill Barr tried to fire the US Attorney for Manhattan. He refused to step down.
The White House squashed a bipartisan Senate bill to stop election interference
Why these scientists still doubt the coronavirus leaked from a Chinese lab
Lawmakers still “not close” to a coronavirus stimulus deal, a day after $600 federal relief expired
On being “ethnically ambiguous”
Russia’s coronavirus outbreak is getting bad. Putin says the worst is yet to come.