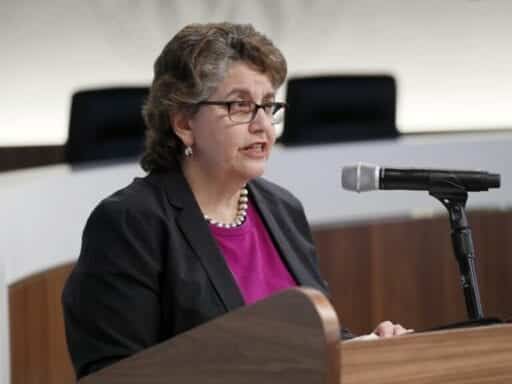 Not only was Trump’s conduct unseemly, but, as the head of America’s elections watchdog explained on national television Friday, it could be illegal.

That’s because federal elections law prohibits any person from soliciting, accepting, or receiving anything of value from a foreign national in connection with a US election. The law doesn’t just apply to money — investigations or political dirt that benefit a particular campaign counts as “things of value” too. And in case Trump is unclear about this, the current chair of the Federal Election Commission (FEC) has gone out of her way to try to explain it to him.

On Friday’s edition of Morning Joe, FEC chair Ellen Weintraub declined to talk about the specifics of Trump’s case but noted that “the law is pretty clear. … It is absolutely illegal for anyone to solicit, accept, or receive anything of value from a foreign national in connection with any election in the United States.”

“The law is pretty clear, Willie: It is absolutely illegal for anyone to solicit, accept or receive anything of value from a foreign national in connection with any election in the United States.” — @EllenLWeintraub to @WillieGeist pic.twitter.com/MAdSfPBhHo

Those comments came a day after Weintraub — who has served as FEC chair for 19 years and was appointed to the role by Republican President George W. Bush — subtweeted Trump by re-upping a memorandum explaining why soliciting foreign campaign contributions is illegal.

Is this thing on? https://t.co/K6phZRex8k

Weintraub first posted that memo in June, after Trump told ABC’s George Stephanopoulos that he is willing to accept dirt on his political opponents from foreign countries, saying “it’s not interference, it’s information.”

Trump on Friday morning insisted on Twitter that his public cajoling of Ukraine and China to investigate the Bidens is about trying to “end CORRUPTION,” not politics. But his comments are belied by text messages involving State Department officials, which were released by House Democrats on Thursday, that indicate Trump tried to leverage the Ukrainian government into conducting investigations that he saw as politically beneficial, both with regard to the Bidens and also the origins of the Mueller investigation.

In which Volker informs Zelensky’s aid that a Zelensky visit to Washington is predicated on convincing Trump that he’ll “get to the bottom of what happened” in 2016. pic.twitter.com/mQk62rlOvk

During her MSNBC appearance, Weintraub noted that penalties for soliciting foreign campaign contributions can be up to “millions of dollars.” But the FEC has been sidelined under the Trump administration. The resignation of vice-chairman Matthew Petersen in August capped off a wave of departures (without replacements) that have left the commission unable to reach a quorum and take enforcement actions.

As Vox’s Sean Collins explained, the “agency was last fully staffed with six commissioners in 2017”:

President Donald Trump has nominated one candidate, a lawyer from Texas named Trey Trainor, but despite being put forward two years ago, Trainor has not had the Senate hearing necessary for confirmation. Senate Republicans reportedly want to use the vacancies to appoint commissioners they favor (although no more than three commissioners affiliated with a given political party can serve at one time and there is already one sitting Republican, Caroline Hunter) and have put forward lawyer Shana Broussard, aide to current independent commissioner Steven Walther, as a top choice. But the Trump administration has yet to respond to this suggestion.

Still, Weintraub’s remarkable comments are evidence that it’s not just Democrats who think Trump’s conduct could meet the threshold of “high crimes and misdemeanors” — and hence constitute impeachable offenses.

Trump’s post-Iowa caucuses messaging is a bad omen for 2020
6 ballot measures that could change the criminal justice system
What to expect at the last Democratic debate before the Iowa caucuses
Stephen Miller, explained
A woman has made a new sexual misconduct allegation against Trump
Vox Sentences: Did Barr lie to Congress?