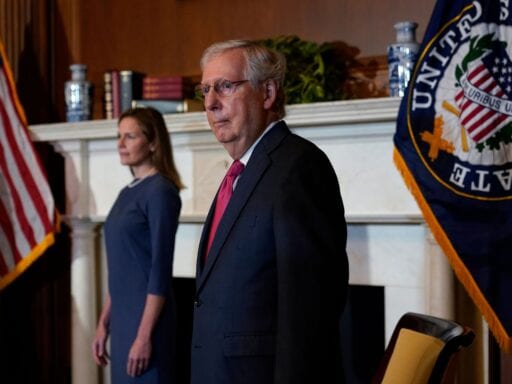 Senate Republicans voted to end debate on Barrett Sunday, clearing the way for her confirmation.

The Senate voted to end its debate over the nomination of Judge Amy Coney Barrett to the Supreme Court on Sunday afternoon, a move that sets the stage for a final Senate floor vote for her confirmation on Monday.

Despite efforts by Democratic lawmakers to use procedural maneuvers to slow her appointment, Barrett is on track to be confirmed to the court just about a week before Election Day with almost unanimous support from Senate Republicans.

Republicans have moved quickly to seat Barrett on the court, following her nomination by President Donald Trump in late September. Democrats have protested Republicans working to fill the seat left open by the death of Justice Ruth Bader Ginsburg so close to the presidential election — particularly given the GOP blocked President Barack Obama’s final Supreme Court nominee for months in 2016, arguing that the winner of that year’s presidential election should get to fill any empty seats.

But Republicans have the votes needed to secure the judge’s place on the court, and the Senate Judiciary Committee began its confirmation hearings for Barrett on October 12.

And on Thursday, the Republican-led Senate Judiciary Committee voted to approve Barrett’s nomination, despite the fact that every Democrat on the panel boycotted the meeting — which technically meant they didn’t have the required number of minority members needed to conduct business. Chair Lindsey Graham (R-SC) disregarded the requirement and proceeded anyway.

On Friday, Senate Minority Leader Chuck Schumer (D-NY) deployed a number of tactics to try to slow down the nomination process, with little effect.

For example, he forced a closed Senate session on Friday for the first time since 2010. “The damage to Americans’ faith in these institutions could be lasting. So before we go any further, we should shut off the cameras, close the Senate and talk face to face about what this might mean for the country,” Schumer argued. But the GOP ended that session — which required cameras to leave — in just 20 minutes.

Schumer also tried to file several motions to delay the nomination process, like calling for the Senate to be adjourned until after the election unless both parties settle on a coronavirus relief package, but these all failed as the GOP-controlled Senate acted against them along party lines. Ultimately, McConnell filed a cloture motion, a mechanism for limiting debate, which set up Sunday’s vote.

Saturday, Schumer tried again to halt confirmation proceedings by raising coronavirus relief legislation, but was blocked by the GOP. And the Republicans’ position grew even stronger Saturday afternoon, with Sen. Lisa Murkowski of Alaska — one of just two Republican senators who had objected to confirming a justice before the election — saying she would in fact vote to confirm Barrett during a floor vote.

On Sunday Murkowski, along with Sen. Susan Collins of Maine, were the only two Republicans to decline to vote to end debate. Murkowski, however, has signaled that her objection is over the timing of the vote, not with Barrett herself, and that she intends to vote to confirm Barrett on a floor vote.

“I’ve concluded she’s the sort of person we want on the Supreme Court,” Murkowski said of Barrett on Saturday, according to Politico. “While I oppose the process that led us to this point, I do not hold it against her.”

Barrett is likely to be confirmed Monday

A final confirmation vote is likely to take place on Monday evening, and barring unforeseen events, Barrett is all but certain to be confirmed.

Republicans need 51 votes to confirm Barrett, and have 53 in the Senate. They can afford to lose three votes, since Vice President Mike Pence can cast a tie-breaking vote in the case of a 50-50 draw.

But that is unlikely to be necessary, since only one Republican lawmaker is expected to defect: Collins, who is running a competitive race for reelection this year.

Political scientists say that the controversy surrounding the Barrett confirmation battle could increase turnout for the elections by illustrating how high stakes the next presidency is as the Supreme Court becomes an increasingly politicized institution.

According to polling for Data For Progress, likely voters split largely along party lines in their perception of whether it was appropriate for Republicans to press ahead with one of the most rapid confirmation processes in modern American history.

Schumer has indicated that the Democrats have considered boycotting the final confirmation vote in a display of dissent — and to send a message to the voters that they feel the process is illegitimate.

Manafort’s poorly redacted filing reveals new Mueller investigation details
Brazil’s Jair Bolsonaro gets coronavirus after months of downplaying the pandemic
Targaryen family tree Game of Thrones' dynasty explained
America’s housing system was radically unprepared for coronavirus
“They are dying. That’s true. It is what it is.” Trump’s Axios interview was a disaster.
Why movie theaters are trading popcorn and soda for chimichangas and custom cocktails