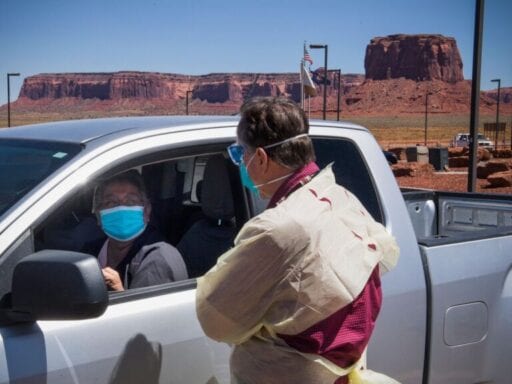 Share
Loading...
A doctor consults with a woman at a Covid-19 testing center at the Navajo Nation town of Monument Valley in Arizona on May 21. | Mark Ralston/AFP via Getty Images

New daily Covid-19 cases have been climbing for more than two weeks, and hospitalizations are also on the rise.

Arizona is seeing an alarming resurgence of Covid-19, with the number of daily new reported cases increasing by 147 percent over the past two weeks, reaching a record high of 1,654 new cases on Friday and 1,233 new infections on Sunday, according to the state Department of Health Services (ADHS). The percentage of tests reporting positive results is also rising, reaching 8.4 percent — a sign that the virus is spreading. The state has now had more than 35,000 total cases.

The state’s hospitals are preparing for a surge of severely ill patients: Cara Christ, director of ADHS, told them June 6 to activate their emergency plans. Banner Health, the largest health care system in the state, says the number of patients on ventilators since May 15 has quadrupled and warned that it has reached capacity for some intensive care treatments.

Our ICUs are very busy caring for the sickest of the sick who are battling COVID-19. Since May 15, ventilated COVID-19 patients have quadrupled. Banner Health also recently reached capacity for patients receiving extracorporeal membrane oxygenation (ECMO) treatment. (2/3)

Arizona is one of 12 states seeing a rise in hospitalizations from Covid-19 and one of eight states that experts say are the new hot spots for the virus. The relatively fast rise in new cases in Arizona makes it one of the most concerning outbreaks because its health care system could soon be overwhelmed. Some 79 percent of the state’s hospital ICU beds were in use as of Saturday.

It’s not entirely clear what’s driving the rise in new cases, but on May 15, Arizona Gov. Doug Ducey lifted the stay-at-home order enacted on March 31. The state’s reopening is guided by an executive order that “allows businesses to gradually and safely open in compliance with federal guidelines as the state continues to mitigate and prevent the spread of Covid-19.”

In March, AZ put through a “safer at home” order. It worked. The curve that began flattened.

But as the order ended & things got back to normal, so did the curve. 5/ pic.twitter.com/BWonWQHcbO

Gyms, swimming pools, and other businesses have been allowed to open up. And although the state issued protocols for public health measures like physical distancing, hygiene, and wearing masks, the executive order didn’t provide a way to enforce them or to ensure compliance. (Many experts believe masks should be mandatory in crowded public spaces to reduce transmission, and several other states have made them so.)

One month later, infections are spiking.

“If you do a root cause analysis of what’s going on and what’s wrong, it’s that word [recommendations],” said Humble.

Part of the outbreak is occurring in the Navajo Nation, a reservation that reaches into several states with its largest share of territory in Arizona. For a time, it had the highest per capita Covid-19 infection rate in the US, and as of June 12, tribal officials have confirmed 6,470 cases of Covid-19 and 303 deaths across the territory. Indigenous people account for 16 percent of deaths from Covid-19 in Arizona among cases where ethnicity is known, despite comprising 5.3 percent of the population. The state has had 1,186 deaths overall as of June 15.

Arizona also has a large elderly population, with 17.5 percent of people over the age of 65. Older people are the most vulnerable age group to Covid-19 because their bodies may be less able to fight off the virus and because many live in facilities like nursing homes where the virus can spread readily. In Arizona, one in three nursing homes has had a case of Covid-19, and that’s where some of the most dangerous infections have occurred.

“If you look at the data here in terms of the new cases being hospitalized, and of course the deaths, they’re being dominated by assisted living and skilled nursing facilities,” Humble said.

State officials also say there are enough tests for Covid-19, yet they have been deployed in drive-up testing blitzes where people volunteered to be tested. It’s a different strategy than testing people showing up in health care facilities with symptoms, or seeking out people who may have been exposed, testing them, and isolating them. But that requires contact tracing, and some Arizona counties are struggling to hire enough contact tracers to do this labor-intensive job.

According to Andy Slavitt, the former acting administrator of the Centers for Medicare and Medicaid Services, it was “irresponsible” for the governor to reopen without contact tracing in place.

Now that cases are surging once more, the state shows no signs of restoring the stay-at-home order. “Are Arizonans really willing to do that again? That’s an open question that I don’t know the answer to,” Humble said.

And even if another round of shutdowns were implemented, it would likely take weeks to see an effect on the number of Covid-19 cases, hospitalizations, and deaths. The first stay-at-home order was implemented back when new daily cases were in the hundreds; now they’re above 1,000.

However, without immediate action, the situation will only get more dire. “If we’re to do some of these things right now, perhaps we could avoid a stay-at-home order or setting up field alternate care hospitals, or both,” Humble said. “I don’t understand the reluctance to take action now because it’s going to be a lot worse later.”

Arizona is a stark example of the new wave that can hit states as they consider whether to relax their pandemic control measures, particularly if they haven’t seen new cases decline.

While the economic and political pressures to relax restrictions are intense, shutdowns remain the most effective option for controlling the pandemic. Recent research shows that in the United States and around the world, stay-at-home orders, closed schools, and canceled public events have saved millions of lives.

Shutdowns “really did flatten the curve, but what I’m afraid of is we’re squandering the progress we made by opening up in such a cavalier way,” Humble said. “This is perfectly predictable.”

The federal guidelines for when it’s safe to begin reopening economies have been frustratingly vague for some state officials, but they do set some benchmarks, namely that Covid-19 cases should decline for two weeks before relaxing.

Meanwhile, countries like Italy that have lifted their restrictions have not seen a resurgence of the virus. Experts aren’t sure why. It may be due to changes in habits and hygiene that have stuck. The difference in outcomes highlights the importance of early action and vigilance. States like Arizona, meanwhile, are launching a real-world experiment, and an extremely risky one at that.

The Breonna Taylor case proves that prosecutors have too much power
Hurricane Florence will slow down. That’s a bad thing.
The case against killing Qassem Soleimani
How swing voters feel about Medicare-for-all
Taylor Swift, pop culture workhorse
How meditation and psychedelic drugs could fix tribalism