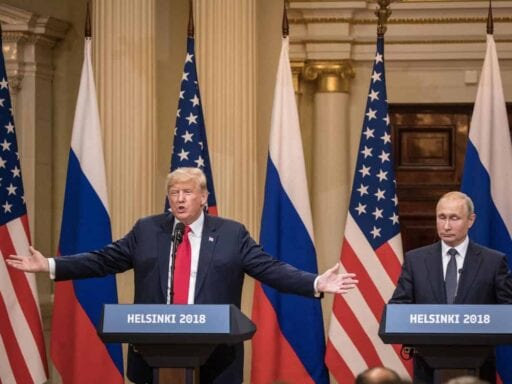 Yes, this is about the “pee tape.”

Asked directly by an Associated Press reporter whether or not it’s true that Russian intelligence has compromising material, or “kompromat,” that it can use to blackmail Donald Trump, Russian President Vladmir Putin did not exactly deny it.

The reference is to a claim in the Steele dossier that Russian intelligence has a secretly recorded tape of Trump in a Moscow hotel with prostitutes who he hired to pee on the bed Barack and Michelle Obama slept in during their visit to Russia.

Putin, though, did not say it doesn’t exist. Instead he argued that he was not personally aware of Trump’s trip to Russia and also mentioned that foreign businessmen visit Russia frequently, before asking, “Do you think that we try to collect compromising material on each and every single one of them?”

Let’s take St. Petersburg economic forum, for instance. There were over 500 American businessmen, high-ranking, high-level ones. I don’t even remember the last names of each and every one. Do you think that we try to collect compromising material on each and every single one of them? Well, it’s difficult to imagine on a bigger scale of this. Please disregard these issues and don’t think about this anymore again.

Obviously, on some level, this is neither here nor there. But the core charge is not necessarily that the Russian government went to extraordinary lengths to record Trump doing something compromising.

The charge is more like the Russian government routinely records and monitors what happens in the country’s fanciest hotel suites and files away anything juicy for potential later use.

I have no idea whether that’s true or not, but obviously recording the insides of hotel rooms is not a particularly daunting logistical exercise. Random American families have been known to discover secret hidden cameras in places as inauspicious as the The Knights Inn and Suites in Virginia Beach. Systematically bugging the presidential suite at the Moscow Ritz-Carlton seems like a more sensible idea than that.

In the past, Trump has tended to obsess over the alleged existence of compromising footage, saying “if they had it, it would have been out long ago.” Trump in office has served as the most Russia-sympathetic, NATO-skeptical, EU-hostile president since the end of World War II, and it clearly wouldn’t be in the interests of the Russian government to release anything that would make Trump look bad.

“It is an official death sentence for Hong Kong:” China moves to pass national security law
The Judge Pryor controversy around Brett Kavanaugh, explained
2020 was supposed to be a big year for marijuana legalization. Then coronavirus happened.
Solar and wind are coming. And the power sector isn’t ready.
Trump pardons ranchers whose case inspired the 2016 Oregon militia standoff
The 7 biggest moments of the Democratic debate