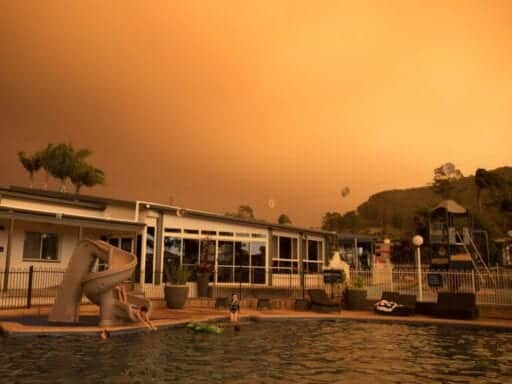 Australia is closing out 2019 amid yet another spike in heat, with temperatures topping 105 degrees Fahrenheit in Sydney and triple-digit temperatures throughout much of the country.

Such heat has become all too familiar for Australians: Australia ended last year with temperatures peaking close to 120 degrees Fahrenheit. But the current heat wave still stands out as it joins record-breaking hellish weather this month that has fueled massive bushfires in four states and sent choking smoke into major cities, with no end in sight.

The fires have already killed at least 10 people, torched more than 11.3 million acres, and destroyed more than 900 homes since September. The blazes made breathing the air in Sydney as bad as smoking 37 cigarettes and have killed 480 million animals, environmental officials told the Times in the United Kingdom, including nearly one-third of the koalas in one of Australia’s most populated koala habitats in an area 240 miles north of Sydney.

Over the weekend, the bushfires triggered mass evacuations in parts of the country. New South Wales Premier Gladys Berejiklian declared a state of emergency in response to the fires earlier in December.

State fire officials are telling literally *everyone*, including thousands of campers, to leave this corner of southeast Australia on Sunday because of the fire threat on Monday.

This is roughly the size of Connecticut. https://t.co/SbhIOeQwsT

The ongoing severe heat is accompanied by brisk winds across much of Australia, worsening fire risks. Wind speeds gusted up to 60 mph on Monday and more strong winds are expected to fan flames and push deadly smoke over major cities.

While temperatures are dropping in the United States and much of the Northern Hemisphere, it’s currently summer in Australia, and high temperatures, dry weather, and wildfires are not unusual this time of year. But this heat wave is already unprecedented, and the severity and continued persistence of these conditions are alarming.

Writing in the Sydney Morning Herald, veterinarian Gundi Rhoades described the conditions for ranchers in Inverell, a town in New South Wales, in apocalyptic terms:

Most farmers in my district have not a blade of grass remaining on their properties. Topsoil has been blown away by the terrible, strong winds this spring and summer. We have experienced the hottest days that I can remember, and right now I can’t even open any windows because my eyes sting and lungs hurt from bushfire smoke.

For days, I have watched as the bushland around us went up like a tinderbox. I just waited for the next day when my clinic would be flooded with evacuated dogs, cats, goats and horses in desperate need of water and food.

The extreme heat in Australia this week is not just a fluke. There were unique patterns in rain, temperature, and wind that converged this year to scorch the continent, factors that scientists were able to detect in advance. But Australia is also deep in the throes of the accelerating climate crisis, facing not just extreme heat but changes in rainfall patterns. These shifts in turn stand to worsen other problems like drought and wildfires. At the same time, the Australian government is grappling with its own contributions to climate change and the forces of its powerful coal mining industry.

Taken together, Australia serves as a microcosm of all the complicated ways that climate variables interact. Its weather this year also shows what other parts of the world may face as temperatures continue to rise. So let’s walk through the ingredients of Australia’s heat and wildfires, and how they will likely intensify in the future.

Australia’s climate is notorious for its volatility, but this year’s high temperatures and subsequent fires have still been outliers.

The country itself spans a region from the tropics in the north to more temperate climates in the south, with deserts in the middle. It also sits between two major oceans and is buffeted by the shifting circulation patterns of both. So the weather over the continent can change drastically year to year and become hard to predict. Still, Sarah Perkins-Kirkpatrick, a senior lecturer at the Climate Change Research Centre at the University of New South Wales, Sydney, explained that there were warning signs that this year’s summer in Australia would get brutally hot.

One signal was that the Indian Ocean Dipole, the cycle of the temperature gradient between the eastern and western parts of the Indian Ocean, was in its positive phase this year. That led to much less rainfall over Australia as prevailing winds pushed moisture gathering above the Indian Ocean away from the continent in the spring.

Another alarm bell this year was the Southern Annular Mode. This describes the movement of the circular belt of wind around Antarctica as it shifts north or south. In its positive phase, the wind belt contracts toward the south pole, which usually brings dry conditions to Australia. This year, it also blended with a surge of heat in the stratosphere, bringing gobs of hot, dry air to southern Australia.

And while Australia’s annual monsoon rains in the northern part of the country packed a devastating wallop in February, causing dangerous flooding in the state of Queensland, they were also behind schedule. That allowed more heat to accumulate over the central part of the country this year.

“So there was lots going on in terms of natural climate variability for this season to be quite hot,” Perkins-Kirkpatrick wrote in an email.

At the same time, there were longer-term factors at work. One of them is that much of Australia is facing a severe drought, spurred by three winters in a row with very little precipitation.

With drought conditions, there is less moisture evaporating in the heat, a phenomenon that usually has a cooling effect.

All the while, the climate is getting hotter. “Australia’s climate has warmed by just over 1° C since 1910, leading to an increase in the frequency of extreme heat events,” according to the Australian Bureau of Meteorology’s 2018 State of the Climate report. This has also led to more rainfall in northern Australia, but less in the southeast, where most Australians live.

These converging factors are why the temperatures in the country have been so stunningly hot. Australia broke a heat record on December 17, reaching a national average temperature of 105.6 degrees Fahrenheit. That record was broken the very next day, averaging 107.4.

“This in itself (the record being broken at the start of the season, being broken two days in a row, and by such a large margin) is phenomenal,” Perkins-Kirkpatrick said. “If the climate wasn’t changing, the chance of this happening is ridiculously low.”

Australia’s fire season is getting longer and more dangerous

The prolonged bout of surging temperatures this year has been an important element in the raging deadly infernos across Australia.

It’s important to note that wildfires are a natural part of the ecosystem in Australia. Many plants and other organisms even depend on regular blazes to germinate, cycle nutrients, and clear decay. However, the combination of rising heat and drier weather has turned vegetation into tinder, leaving trees, shrubs, and grass ready to ignite near some of the most densely populated parts of the country. “There has been a long-term increase in extreme fire weather, and in the length of the fire season, across large parts of Australia,” according to the 2018 State of the Climate report.

However, the links between fire risk and climate change are more complicated than the links between extreme heat and climate change. That isn’t to say humans aren’t contributing to the danger from fires. As in the United States, human-caused factors like building in fire-prone areas are contributing to the growing fire risk in Australia. Arson is also suspected as a cause of some of the recent fires.

And as the climate changes, the underlying conditions for Australian bushfires will continue to amplify, namely heat and dryness. “Some cities in Australia will likely hit temperatures in the 50’s (Celsius) [more than 122 degrees Fahrenheit] by the end of the century,” Perkins-Kirkpatrick said.

As a result, scientists expect to see more extreme wildfires in Australia in the latter part of this century. That means history can no longer serve as a guide for cities coping with the heat or firefighters battling flames.

“Events that are unprecedented in a given region, such as the 2018 [fire] event, reveal that firefighting preparation and training cannot rely on previous events as guidance for the most dangerous conditions they can expect in the current and future climate in which large-scale fires occur more regularly,” researchers warned in a study published in December in the Bulletin of the American Meteorological Society looking back at the 2018 fires in Australia.

That’s why fire officials are growing anxious about the prospects of more extreme fires. A group of 23 fire chiefs requested a meeting with Prime Minister Scott Morrison in April to discuss the threat, a meeting that has yet to take place.

These are the letters sent by former NSW Fires Chief Greg Mullins and 22 other former emergency chiefs to the Prime Minister in April and September predicting a bushfire crisis and requesting a meeting. #nswfires #auspol pic.twitter.com/djhHjHknAe

Australian cities are bracing for a hot and fiery future, but the national government is lagging

Cities like Sydney have started to recognize the risks posed by climate change, but are still struggling to adapt to the warming to come. “Extreme heat is our biggest risk,” according to the 2018 Resilient Sydney report from the city government. “But new homes are usually not constructed to provide maximum protection from heatwaves and there is less tree canopy cover to reduce surface temperatures.”

To deal with the rising heat, the city is working to deploy reflective surfaces and plant trees to add shade and to mitigate the urban heat island effect. Officials are also investing in making the power grid more reliable to prevent cascading infrastructure failures as thousands of air conditioners switch on and strain the electricity networks.

“When energy demand increases during a heat wave, electrical infrastructure is more likely to overload and fail, causing air conditioners to stop working and outages to communication networks, reducing the ability of people to seek help,” according to the report.

But Australia’s national government has been slower to respond to the risks posed by extreme heat, bush fires, and climate change. Australian Prime Minister Scott Morrison apologized this month for taking a vacation to Hawaii during the recent heatwave and bushfires. However, he brushed off calls to curb Australia’s reliance on coal.

“I am not going to write off the jobs of thousands of Australians by walking away from traditional industries,” he told Australia’s Channel Seven.

Though Australia accounts for 1.3 percent of global emissions, it is currently the world’s largest exporter of coal. Delegates at the recent United Nations climate negotiations in Madrid, COP25, named Australia as one of the parties blocking progress toward settling the rules of the Paris climate agreement. Under the agreement, Australia committed to curbing its greenhouse gas emissions between 26 percent and 28 percent below 2005 levels by 2030. That target is not sufficient to meet the Paris target of limiting warming this century to less than 2 degrees Celsius.

Morrison defended Australia’s actions on climate change. “Australia is taking action on climate change,” he told Australia’s Nine News last week. “What we won’t do is engage in reckless, job-destroying and economy-crunching targets.” In 2014, Australia became the first country in the world to introduce and then repeal a national carbon tax.

Meanwhile, the coming days promise little respite from the heat for Australians. And even amid the haze from bushfires, Sydney’s New Year’s fireworks show will go ahead as planned.