Barcelona is pushing out cars and putting in superblocks. Here are the 2 biggest challenges ahead. 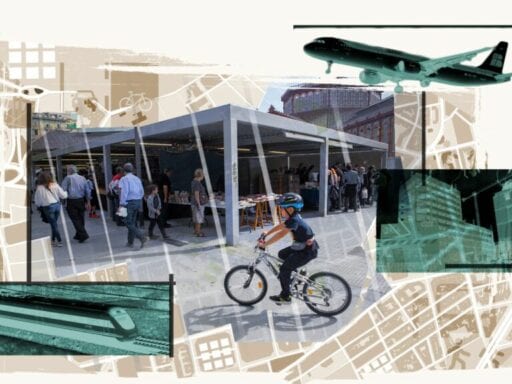 The twin terrors of traffic and gentrification, and how they can be addressed.

This is part three in a five-part series about the comprehensive urban plan being implemented in Barcelona, Spain, which would reclaim more than half the streets now devoted to cars for mixed-use public spaces, or “superblocks.” This reporting project was supported by the Kleinman Center for Energy Policy at the University of Pennsylvania, where the author, David Roberts, is a senior fellow.

Barcelona’s city government has resolved to push back the choking tide of cars overwhelming the city.

It has begun implementing an urban plan that, if seen through to completion, would transform more than half the city’s streets into mixed-use public spaces, “superblocks,” where residents can walk, bike, or just hang out without fear of fast-moving two-ton machines (see part one).

The first superblock implemented as part of this plan was in the Poblenou neighborhood, and it caused quite a bit of turmoil (see part two in this series). The second, around the newly renovated Sant Antoni market, went more smoothly.

As the program gets rolling in earnest — there are five superblocks in some stage of implementation and three more in the queue — Barcelona will face two key short-term challenges.

The first is traffic, the risk that pushing cars out of superblocks will only clog the remaining through streets. The second is gentrification, the risk that rents inside superblocks will rise and longtime residents will be forced out. Both dangers are very much on the minds of city officials, who plan multi-pronged efforts to address each.

Shaping a transportation system around superblocks

The people inside the superblocks might enjoy their peace and quiet, but what, as anti-superblocks campaigner Jordi Campins asked, about the poor souls on the outside, on the remaining arterials? What about the drivers stuck in that traffic?

It’s important to keep perspective: Initial surveys have found that traffic around the perimeter of the Poblenou superblock increased by around 2 to 3 percent. That’s not a crisis. Still, the effect could be compounded as superblocks proliferate.

The city is aware of the concern. “The streets that continue to have through traffic also need a system of improvements,” says Ton Salvadó, the city’s chief architect. “People still live there. It’s something we’re working on.”

Most efforts are going toward a reduction in overall vehicle traffic, mainly by making it easier to get around in other ways, like walking and public transit.

Superblocks will help encourage walking. So will the envisioned “green corridors” lined with plants and trees that will connect the superblocks to one another, part of a plan to carpet the city in 400 acres of new green space by 2030.

As for public transit, way back in 2002, Barcelona’s resident urban visionary Salvador Rueda began working on a redesign of the city’s bus system, creating an orthogonal network of mostly perpendicular routes shaped around the coming superblocks.

“This fall, we will have the network [completely] implemented,” Rueda says. “Attention! Sixteen years!”

The network runs fewer overall routes than the radial network it replaced, but more buses on each route, ensuring a reliably short wait at any stop — two minutes on average, which is roughly when our minds begin to register impatience. (Rueda also has a degree in psychology.)

Because of the regularly spaced, perpendicular routes, 90 percent of journeys in the city involve one transfer at most, and 95 percent of citizens live within 300 meters of a stop. In keeping with Cerdà’s egalitarian spirit, service is the same quality in the center and the periphery, with stops roughly every 400 meters.

And, of course, the city wants to encourage biking. It is aggressively building bicycling infrastructure, including a system of separated bike lanes shaped around superblocks, and expanding Bicing, its much-loved bike-sharing system for city residents. Only 3 percent of trips in Barcelona are currently taken by bike, but the number is rising.

The cumulative effect of all these efforts (and others) will be to reduce the share of trips in the city taken by car.

According to Rueda’s modeling, a reduction in total vehicle traffic of just 13 percent would allow Barcelona to implement the entire superblock plan with no increase in auto density on the through streets. A reduction of 21 percent, which is what his models project as a consequence of the superblock plan, would allow complete implementation with a reduction in auto intensity across the city. That is the goal.

There is, however, something of a fly in the ointment, in the form of regional traffic — people from surrounding towns and suburbs who drive into Barcelona for work and drive back out at night. By some estimates, 60 percent of auto traffic in Barcelona is regional in origin.

Transportation planning across the metropolitan region, represented by 36 city halls, is a whole different ball of wax. Barcelona is the biggest and most influential city in the region, but trying to find consensus can be like herding cats. There wasn’t much tradition of metropolitan mobility planning when Mayor Ada Colau came in.

“When we arrived, our first step was to say, look, we have a health problem and a problem with pollution,” says Janet Sanz, Barcelona’s deputy mayor for ecology, urbanism, and mobility. “If we don’t work together, Barcelona will put up barriers, symbolic barriers, so that people won’t be able to come in. If that happens, all of us will have a problem. So let’s find solutions together.”

Efforts are underway, including expanding transit zones and regional car- and bike-sharing systems, but a real solution may require upgrading Renfe, Spain’s national train system, and the regional Catalan Railways. Those are changes over which Barcelona has limited influence.

“The problem is that the public transportation connection from the rest of the metropolitan area is awful,” says Cynthia Echave, technical director at the Urban Ecology Agency of Barcelona. “We have a very nice connection inside the city, but from outside in, it is terrible.”

“In terms of mobility that enters and leaves the city,” Salvadó says, “the strategy is based around public transport, 100 percent.”

The other solution, which several people mentioned as a test of the administration’s resolve, is to make the city more inhospitable for drivers by removing, or raising the price of, parking. It is relatively plentiful in the city, much of it underground.

I ask Sanz if the administration plans to confront this fraught issue.

Becoming a popular global travel destination isn’t all roses. As more and more tourists flood into Barcelona, it becomes more profitable for real estate speculators to buy up housing and rent it out to tourists, e.g., through Airbnb, than to house residents. Especially in the most walkable areas with the most public space, longtime working-class residents are driven out and the boutiques show up, alongside more tourists and professional-class residents.

An estimated 1.7 million tourists visited the city in 1990. In 2000, it was 3.1 million. According to Mastercard’s annual Global Destination Cities Index, Barcelona was the 18th most visited city in the world in 2018, with 8.7 million international visitors, more than five times its population.

The problem has become intolerable in the city. Few American cities will admit to trying to decrease tourism, but just about everyone I spoke to inside and outside the administration agrees that Barcelona needs to rein in and reduce the influx. Among other things, the city is cutting down on licenses for Airbnb rentals and new hotels.

As long as new tourists and new foreign investment continue flooding in, there will be upward pressure on prices. That will be especially true in nicer areas, and to the extent that superblocks make areas nicer, their march across the city will threaten gentrification in its wake.

Perversely, in most cases, making a city greener seems to make it less affordable. Isabelle Anguelovski, a professor and researcher in urban planning and director of the Barcelona Lab for Urban Environmental Justice and Sustainability, points to a study of 100 cities in Western Europe, the US, and Canada showing that “urban green boosterism is significantly correlated to unaffordability.”

The only exceptions, Anguelovski says, are cities that put equity at the heart of sustainability. (She cites the French city of Nantes, which wrote affordability into its sustainability plan, as a positive example.) If Barcelona leaders want to make the city affordable for the people who live there, she says, “they have to target the special interests that are driving gentrification, which are real estate speculators from the Middle East, Russia, and China. They have to target the tourism industry, the port, and Airbnb. And they have to articulate a Spain-wide discourse around the right to housing.”

Most people I talked to agreed that the only solution to gentrification, in the end, is social housing — housing set aside or rent-controlled for working- and middle-class residents. The extreme example of this strategy is Vienna, Austria, where 30 percent of residents live in social housing and fully 62 percent live in housing with some form of rent control. (The average in American cities is under 1 percent.)

Barcelona is currently at 1.5 percent social housing. Getting to 30 percent is a fantasy, says Salvadó, but “if we were able to reach 10 percent, I’d sign anywhere.” The city is plenty worried about the problem of gentrification; it has a whole office devoted to the problem.

Superblocks cause traffic and gentrification but seek to eventually overcome them

In the midst of the debates over traffic and gentrification, superblocks are in an odd position, both cause and cure.

“The problem is when you are acting in only a pilot area,” says Echave, “because obviously, it’s a patch.” As superblocks are built, there will be temporary effects on traffic and gentrification that are not captured in Rueda’s figures, which model a complete system.

For the city administration, moving forward will be a delicate process.

It may require some policies in the interim to ensure that residents in and around new superblocks don’t see their rent spike. (Anguelovski cites a proposal in the budget of Spain’s progressive new prime minister, Pedro Sánchez, that would give renters seven years of protection from rent increases; she suggests something similar phased in around superblocks.)

And superblocks will need to move forward in tandem with aggressive efforts to reduce overall car traffic (and improve other mobility options) so that through streets do not become choked.

But the larger goal of the superblocks project, and of Barcelona’s urban plan generally, is to make the whole city walkable — to ensure that all residents, of all ages and incomes, have access to public spaces, greenery, and a community of neighbors.

“What is the solution, in my opinion? To spread the superblocks and make the same quality in all the city,” Rueda says. “Equity is key.”

Superblocks are intended to be much more than traffic-calmed areas. Rueda envisions them as a new social and economic unit — a way of constructing an urban system more resilient to the vicissitudes of climate change. But with municipal elections looming in May, it is an open question whether his full ambitions will ever bear fruit.

In part four, we’ll take in the grand scope of Rueda’s vision and contemplate its tenuous political fate. Read the rest of the series here.

Wisconsin is still holding an election Tuesday. Here’s when we might see results.
Will young women of color shape the Democratic Party?
Biden calls for Trump’s Supreme Court nominee to be withdrawn if he wins the election
Decoding the wedding dress code
Hurricane Florence is costing workers income. Blame federal labor laws.
How I’m using AI to write my next novel