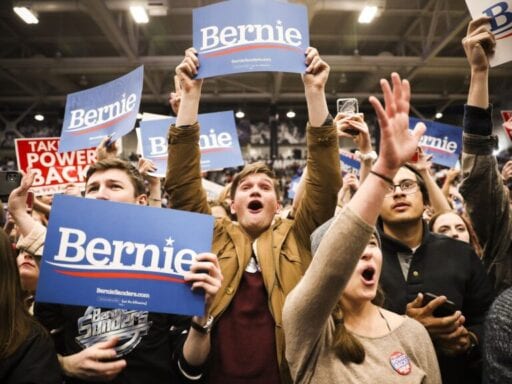 An inside look into how the Sanders campaign pulled off their New Hampshire win.

Though the final vote might have been closer than he liked, Sanders is the projected winner of the New Hampshire primary, according to Decision Desk HQ. Importantly, it looks like he and former South Bend, Indiana, Mayor Pete Buttigieg are tied in the delegate count. Decision Desk HQ’s preliminary estimates show that Sanders and Buttigieg will both get 9 delegates; Minnesota Sen. Amy Klobuchar is estimated will get 6.

This is the second early state to give the independent senator and progressive icon from Vermont momentum heading into Nevada and South Carolina. He has a long way to go before securing the nomination, but claiming victories in Iowa and New Hampshire puts him in an enviable position moving forward.

It’s another astounding win here for Sanders, who shocked the Democratic political establishment in 2016 with a 22-point win over Hillary Clinton. Over more than a month of covering the race here, I often heard him talk about his “gratitude” toward the state’s voters for uplifting and spreading his ideas nationwide in 2016. Sanders has been the favorite to win here for the past month, but there were doubts earlier this year whether he could pull it off.

Sanders headlined a massive 7,500-person rally on Monday night at the University of New Hampshire with fellow progressive star Rep. Alexandria Ocasio-Cortez (D-NY) and the Strokes. People holding red “Take the Power Back” signs stood behind American flag bunting, and the hockey stadium reverberated with roars from the crowd when Sanders talked about a Green New Deal to address climate change and income inequality.

What unites Sanders supporters is devotion to a man who hasn’t wavered on progressive issues in more than 30 years. “I’ve been following Bernie since he was mayor of Burlington,” supporter and volunteer Susan Lawrence of Claremont told me recently. “We need 100 Bernies to save this country.”

Now he’s about to head into Nevada and South Carolina with momentum. Though he suffered among voters of color in 2016, his 2020 campaign has already put a lot of work into expanding their nonwhite voter base around the country. He currently leads with Latino voters in the polls and is cutting into former Vice President Joe Biden’s early lead with black voters.

The Sanders campaign has had its ups and downs in New Hampshire this year. But months of organizing and Tuesday’s win put him on a solid upward trajectory. Among Sanders’s allies, there’s a sense that he’s never been so close to the nomination.

“I think Bernie in 2016 was this insurgent candidate, this pie in the sky, this person,” said former New Hampshire AFL-CIO president Mark MacKenzie. “He was coming up with stuff, $15-per-hour minimum wage, free college — people were saying, ‘This guy’s nuts.’ Now, I look at him, he looks like the president.”

Back in the summer, the Sanders New Hampshire campaign was in trouble.

Some high-profile Sanders supporters from 2016 had switched their support to fellow progressive Elizabeth Warren. Warren’s momentum was evident in the state, and the media narrative was that she could successfully consolidate progressive voters — and possibly win the primary.

While some of Sanders’s 2016 supporters were shopping around for a new candidate, others were sounding the alarm to the national campaign: Something was going horribly wrong in a state where they felt Sanders should have an advantage.

“My concern was Elizabeth Warren was out-organizing the Bernie Sanders campaign for the first three months of the campaign,” said Sanders’s 2016 political director Kurt Ehrenberg, a well-known progressive operative in the state who initially signed on as a senior adviser to the New Hampshire operation in 2020. While national leadership was focused on Biden and building up its California operation, Ehrenberg suddenly feared Sanders was going to get defeated in his own backyard come February.

The concern was if Sanders lost in the state that launched him in 2016, it could irreparably damage the campaign.

“I was talking about competing on the ground for the leadership of the progressive movement in New Hampshire that Warren was taking away from us,” Ehrenberg said. The Sanders team had little presence at the New Hampshire Democratic Party convention in the summer, especially compared to the army of Warren supporters who showed up. Basic organizational tools were lacking, and New Hampshire supporters who had helped usher in Sanders’s massive 2016 win felt the national campaign wasn’t seeking their advice.

The campaign switched things up in September, bringing on trusted 2016 staffer Shannon Jackson as the new New Hampshire state director. Jackson is universally praised by Sanders allies in the state.

“He turned so many things around,” said Janice Kelble, a political organizer at the American Postal Workers Union in New Hampshire and a Sanders backer in 2016 and 2020. “We took a step back for a while, it took some recovery time. But I think Shannon has been really, really focused, and I think he’s 100 percent behind it. That’s clear to me, it’s not just a job.”

The Sanders campaign has built its campaign around voter contact and door-knocking; Jackson told me the campaign knocked on upward of 475,000 doors before its final get-out-the-vote weekend ahead of Tuesday. Last Saturday alone, volunteers knocked on 150,000 doors.

“The best way [Sanders] feels to get our message out is person-to-person,” Jackson told me Saturday at a canvass launch in Manchester, New Hampshire’s largest city. “And that’s why, again, any way we cut this campaign, it’s people-powered. I think that’s what really, really matters is those conversations and those personal stories.”

Indeed, at the Manchester bar Jackson was in, volunteers literally ran out of nearby door-knocking turf by mid-afternoon because so many had gone out in the morning.

Sanders has a path to the Democratic nomination

New Hampshire is a tough test case for whether the Vermont senator can appeal to nonwhite voters; it’s 90 percent white. However, the Sanders campaign here has been making a coordinated effort to appeal to the state’s refugee community in Nashua and Manchester, as well as its rural, economically depressed northern area.

“We’ve done a lot of work in the New American communities, Manchester, Nashua specifically,” Jackson said. “I love our check-out calls every night where I get to hear about the stories on the doors, and there’s many, many times our organizers [are] saying, ‘Here’s a story I’ve got about, we’ve never had our door knocked on.’”

Sanders’s theory of winning elections relies on expanding the electorate and getting traditionally neglected groups to turn out. Time spent organizing satellite caucuses in mosques and among immigrant factory workers helped juice turnout for the senator in the Iowa caucuses.

Though Sanders’s 2016 campaign had a reputation for attracting a disproportionately white coalition, that has changed in a big way this time around. Younger voters and people of color may be the key to Sanders’s path to the nomination. A New Hampshire victory only helps him get there.

“If Sanders keeps winning, I could see Democrats in other states getting on board,” said University of New Hampshire political science professor Dante Scala. “I feel like we were saying the same thing about Trump four years ago, there was a ceiling. The more you win, the better that argument becomes.”

Sitcoms usually get meaner as they get older. Not Brooklyn Nine-Nine.
Joe Biden will use the Defense Production Act in his anti-coronavirus effort
Staging West Side Story in 2020 is an act of hubris. Ivo van Hove’s production shows why.
Watch: How soap kills the coronavirus
These are dark days. At least it’s peak sunset season.
Hundreds of Amazon employees plan to risk their jobs this week by violating company policy