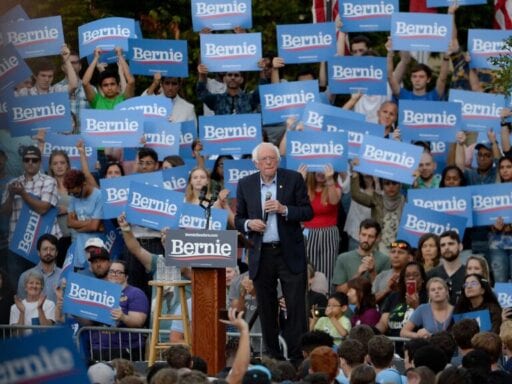 Sanders’s proposal is estimated to raise $1.6 trillion more in revenue than Warren’s plan over 10 years.

Sen. Bernie Sanders has unveiled his plan to directly tax the wealth of millionaires and billionaires — and it goes substantially further than Sen. Elizabeth Warren’s plan to do the same.

The proposal would cut the wealth of billionaires in the United States in half in 15 years, and entirely close the gap in wealth growth between billionaires and the average American family, according to University of California Berkeley economists Gabriel Zucman and Emmanuel Saez, who advised Sanders on his plan. Hitting the richest 180,000 American households, Saez and Zucman estimate the tax would raise $4.35 trillion over the next decade, which Sanders says would go toward paying for his biggest policies, including Medicare-for-all, affordable housing, and universal child care.

The wealth tax has been one of Sen. Elizabeth Warren’s signature policy proposals on the campaign trail, what she sells as a “two-cent tax” on the 75,000 wealthiest families in the country: She’s proposing a 2 percent tax on household assets above $50 million and 3 percent for households with assets worth more than $1 billion.

But Sanders’s campaign has expanded the idea, with more and higher tax brackets that kick in at a lower wealth threshold.

With more brackets for individuals and families, Sanders’s proposal is estimated to raise $1.6 trillion more in revenue than Warren’s plan over 10 years. Whereas Warren’s plan has the same thresholds for individuals and married couples, which could enable some wealthy couples to evade the tax by getting divorced, Sanders’s plan closes that loophole.

As Vox’s Matt Yglesias explained, most middle class Americans already pay a version of a wealth tax: a property tax to their local government on their homes, the most common asset among middle-income Americans. But property taxes don’t get at all the wealth super rich people keep in stocks or other assets. Sanders also has a proposal to dramatically expand the estate tax, topping out at a maximum rate of 77 percent. Currently, the estate tax maxes out at 40 percent.

Taxing the ultra-rich has become increasingly popular in progressive circles. This is in part a reaction to the drastic Trump tax cuts which have not led to the kind of middle class income growth that was promised.

This summer, the United States hit a record for extended economic expansion — the longest period of economic growth in US history — a metric the Trump administration is using as a case for his reelection. But wealth and income inequality has also been rising in the United States; rich Americans are holding a greater and greater share of the wealth.

“Enough is enough. We are going to take on the billionaire class, substantially reduce wealth inequality in America and stop our democracy from turning into a corrupt oligarchy,” Sanders said in a statement.

Income inequality in the United States has been well documented by economists Zucman and Saez of UC Berkeley and Thomas Piketty of the Paris School of Economics. By analyzing tax data, the cost of employer-provided health care, pensions, and other benefits, they found that income growth hasn’t grown substantially for the middle class and has disproportionately gone to the wealthy. It should be noted, as Vox’s Dylan Matthews reported, the scale of inequality captured by Saez and Piketty has recently come under some dispute. But there’s little question that inequality has increased in the United States since the 1980s.

When Sanders and Warren rail about the millionaires and billionaires, the wealthy and well-connected, this is what they’re talking about.

The idea behind a tax like this is that it would significantly reduce the accumulation of extreme wealth. For one, the tax itself would incentivize wealthy people to, well, be less wealthy in the eyes of the government. As Yglesias explained:

…the mere existence of the wealth tax would, on the margin, encourage wealthy individuals to dissipate their fortunes on charitable giving and lavish consumption. If you try to horde wealth the government is going to tax it, so you might as well spend it.

That is both a feature and a bug. But as some experts have pointed out, it might also encourage rich people to hide their wealth. As Saez and Zucman have written in the past, these kinds of tax proposals are “fragile.”

“They can be undermined by tax limits, base erosion, and weak enforcement,” the economists wrote in an early September 2019 paper. That’s why many countries have abandoned them. As Yglesias pointed out, of the 12 OECD member nations that had wealth taxes in 1990, only four — France, Norway, Spain, and Switzerland — continue to implement them. But Zucman and Saez argue “that tolerating tax competition and tax evasion is a policy choice.”

Sanders does address enforcement in his plan.

He is calling for a “national wealth registry and significant additional third party reporting requirements,” as well as increasing Internal Revenue Service funding to enforce the wealth tax. The plan calls for a mandated IRS audit of 30 percent of wealth tax returns for those in the 1 percent bracket and a 100 percent audit for all the billionaires. It also establishes a 40 percent exit tax on the net value of all assets under $1 billion and 60 percent over $1 billion for anyone that wants to take their wealth to another country.

Sanders also addresses a legal criticism Warren’s plan has gotten: that it might be unconstitutional. His campaign is unequivocal in its pushback, citing two Yale constitutional experts, Bruce Ackerman and Anne Alstott, who have written in defense of the wealth tax.

“The reality is that we already have a wealth tax in America — the property tax — and it disproportionately impacts working class families,” the plan reads.

Amazon Ring sales nearly tripled in December despite hacks
Australia just had its worst day of coronavirus. Yet health experts remain optimistic.
Avenatti: Stormy Daniels' interview with Cohen prosecutors canceled
Disney+’s Star Wars series, The Mandalorian, is a triumph of atmosphere — and little else
Why is framing a picture so expensive?
Sondland’s testimony shows Mike Pompeo was far more central on Ukraine than we knew