Beware companies that promote “buy one, give one” charity 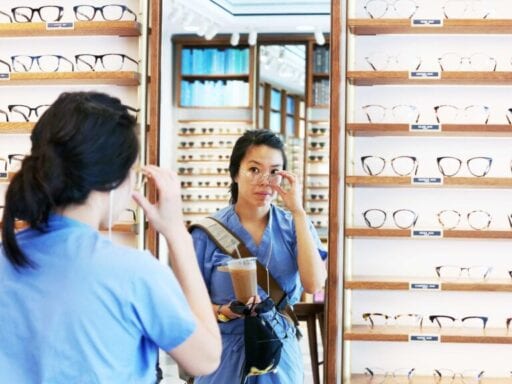 The fashion industry has embraced this philanthropic model. But it misses the point.

One of the first times I toured developing world factories where most American fast fashion is made, I felt like I couldn’t breathe.

I had just touched down on the ground after more than 24 hours of traveling when I raced to a supplier meeting. At the time, I was working in a fast fashion company I won’t name, helping my company create fashion products overseas for a variety of different American clients. When a fabric was not ready in time for our meeting after multiple delays, I demanded to be taken to the original factory, located a three-hour drive into the countryside.

I stepped foot on the ground floor of the fabric factory, which had conveyor belts that would roll product past workers, who would scan fabrics inch by inch for flaws. It smelled faintly of burning leaves. We then went one floor above where the print machines were running. A distinct smell of chemicals filled the air. Anyone who has ordered cheap clothing online or bought a pre-packaged Halloween costume might recognize the smell. I noticed that there were no windows, even though the building stretched a full city block.

By the time we got to the next floor, I noticed people started wrapping their faces with scarves as dozens of giant print ranges hummed around them. The fumes were intensifying. My nose, throat, and eyes started to burn. By the third floor, I felt like I couldn’t breathe. I ran to the stairwell and stuck my head out the only window, gasping for fresh air outside.

I was in the print house for no more than five minutes and had to leave. Meanwhile, the man showing me the factory who worked there full-time seemed completely unbothered by the toxic fumes.

Once we were safely outside, they told me that I was the only one from my company that had ever visited, despite years of working together. My colleagues never ventured past the much more comfortable office three hours away, waiting for the factory to bring everything back for them.

This was the moment I realized that no one I worked with knew or cared about the conditions fashion is made in or what factory workers’ lives are like.

I spent seven years working in the fast fashion industry. In that time, I watched countless executives, creative directors, and designers visit clothing manufacturers throughout Asia in a highly orchestrated, controlled, and sterile environment. These leaders would stay at the fanciest hotels and eat at the most expensive restaurants, following curated itineraries put together by agents and factory representatives. Their schedules were planned so they would never see how the people that worked in the factories lived.

For years, powerful leaders in the American fashion industry have ignored, either purposefully or naively, how our clothing is made. Can we expect the industry to change a system that they do not fully understand?

After Nike released its famous Colin Kaepernick advertisement last year, I remember seeing one meme that summed up fast fashion’s hypocritical relationship with ethics and issues of social justice: an image of young girls, possibly underage, in a sweatshop sewing Nike shoes with the copy from the ad — “Believe in something. Even if it means sacrificing everything” — on top of it.

How can a brand like Nike advocate for civil rights in the USA while turning a blind eye on the workers they exploit in faraway places? Clothing companies rarely make actual attempts to aid causes or give people what they need. Instead, brands create responses to whatever social issues are hot at the moment. Even in an era of increased awareness about the horrific factory conditions, the fashion industry has failed to offer real solutions, instead offering us “buy one, give one” charity solutions that use consumerism to assuage our guilt.

For too long, companies have told us that we can wipe away our guilt for buying unethically made clothes through even more consumerism. Companies boast that they donate gifts like shoes, eyeglasses, and menstrual pads to people in impoverished countries while American customers applaud those brands’ morality. The truth is, in the real world, these gifts often do little to break marginalized populations out of poverty, and in many cases, cause more harm than good.

Warby Parker is an example of a brand that offers charity through consumerism. On the surface, its “Buy a Pair, Give a Pair” program, which donates one pair of glasses to someone in need for every pair purchased, sounds easy and makes heroes of anyone looking for a little retail therapy. Shoppers feel proud when co-workers and friends ask “where did you get your glasses from?” and they can respond that by purchasing Warby Parkers, they helped someone.

The Warby Parker website states that “2.5 billion people around the world need glasses but don’t have access to them; of these, 624 million cannot effectively learn or work due to the severity of their visual impairment.” They go on to boast that just one pair of glasses can increase the productivity of someone in the developing world by 35 percent and increase their income by 20 percent.

Some research has suggested that glasses improve productivity for jobs that require manual dexterity, though other studies have been less conclusive. But these numbers obscure a deeper reality. Even some of the recipients of Warby Parker’s free glasses in countries like India who work in call centers or factories often make very low wages. Some are forced to live in slums, sometimes waiting hours to be able to use a toilet. In the grand scheme of wages and quality of life, glasses and productivity are a low priority.

That’s not to say that glasses won’t be appreciated by many people. The question is, given limited time, money, and resources, what charitable aid would be best based on the hierarchy of people’s real needs?

To be fair, Warby Parker’s program does work in some places, such as New York City or Baltimore, where glasses do help students who were previously falling behind because they could not see the blackboard. These gifts might make the difference between a child being held back a year or being placed in honors classes — setting the course for the rest of their lives.

But in developing countries, where Warby outsources their charity services through an organization called VisionSpring, how are glasses really helping when the average job pays so little? For aid to work, we need to look at the entire system. What happens to these people after we help them? If they continue working jobs for less than a few dollars a day, then not much.

If the goal of Warby Parker is social mobility through better jobs, and not just to sell more glasses by pulling on heartstrings, there are better options for aid.

A better gift might be to create an overseas customer service center dedicated to fair wages and other programs that create social mobility. A better gift might be to re-work their supply chains to ensure fair wages, empowering those in need to be able to afford their own glasses instead of relying on presents. Or to encourage their charity partner, VisionSpring, to help the communities that receive its gifted glasses become economically independent.

VisionSpring does teach locals to administer eye exams, who are then able to resell donated low-cost glasses to those in need. Helping to create small businesses sounds like a step in the right direction. But these communities are still left reliant on Western brands’ gifts, this time in the form of discounted glasses that will be resold.

I reached out to Warby Parker for more details into its entrepreneurial programs overseas and to see if there is a plan to help communities become fully self-sustaining. The company responded that “VisionSpring is a permanent fixture in the communities they work in, serving as wholesale retailers for the local entrepreneurs who sell and distribute glasses. Their work ensures that their partners on the ground (whether that be a government agency or an NGO) is set up for long term success.“

Cora, an organic tampon company, also follows the “buy, give” model by gifting disposable pads to women in developing countries with every purchase of a box of tampons. Cora claims a 90 percent decrease in school dropout rates when girls have access to menstrual supplies. However, simply providing those supplies is ineffective as a solution to education equality.

In India, many schools do not have toilets. Culturally, men are more free to pee outside. Women may feel forced to hold it, until nighttime, when they can go out in the cover of darkness. This causes health problems and puts women in villages at risk for rape. So, even if these girls have pads, many of them don’t have access to bathrooms to be able to use them properly. When researchers in a 2009 study handed out free menstrual supplies to girls in Nepal, they found that school attendance did not improve due to a lack of access to private bathroom facilities.

I reached out to Cora for comment, and the company did not respond.

I don’t have an answer on how to fix the complete lack of upward mobility that has been built into fashion supply chains. But I think the first step is for us to start talking about it. We need to educate consumers about the real issues that are hidden by the industry, helping people to understand that in many cases they are being sold a good story when they think they are supporting a good cause. The “buy one, give one” model, or the “buy one, and we donate X percent to a charity” model is not the answer. These are just business models designed to get you to consume more while feeling noble about it without actually helping people in a meaningful way.

Change is not accomplished through quick and easy handouts. It requires slow and steady collaborative revision of institutional systems that have been in place for decades. It comes from education and strategic impact planning as well as learning from small failures before eventually achieving great successes.

Simply put, progress does not occur through buying a new pair of shoes, sunglasses, or box of tampons with the promise of a corporation to distribute gifts on their customers behalf.

Melanie DiSalvo left her job in fast fashion to focus on making change in the fashion industry. In 2017, she founded virtue + vice to help consumers understand how clothing is made, and in 2019, she opened a factory in India to assist brands in creating sustainable and ethical products.

What we know about a reported hunger strike by fathers in immigration detention
Poll: Prominent governors who want to reopen quickly aren’t so popular
The next Democratic debate will take place right before the New Hampshire primary
In 1986, Watchmen skewered the way we love superheroes. It’s still as relevant as ever.
Nationwide, male doctors get paid $100,000 more than female doctors
Emoji reveal more about you than you think