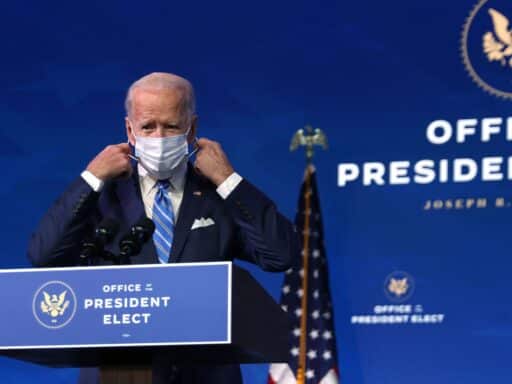 Here’s how Biden plans to get 100 million vaccine doses out in his first 100 days.

President-elect Joe Biden announced a plan on Friday for what will likely be his most pressing challenge when he takes the White House next week: fixing America’s messy Covid-19 vaccine rollout.

The plan builds on Biden’s $1.9 trillion economic stimulus proposal, which included a $400 billion Covid-19 plan, announced on Thursday. It promises more support to states and lower levels of government, a greater expansion of vaccine eligibility, funding for more public health workers, a boost in vaccine production, better communication about the vaccines, an education and awareness campaign, and more.

Above all, the plan aims for something that President Donald Trump’s administration didn’t do with Covid-19 more broadly and the vaccine in particular: greater federal involvement. The Trump administration has repeatedly pushed against that concept — going as far as characterizing more support to help states actually get shots in arms as a “federal invasion.” Biden has rejected that rhetoric, calling for a bigger role by the feds and cementing it with his plan.

The stakes are as high as they’ve ever been. The country now averages 240,000 Covid-19 cases, and more than 3,300 deaths, each day. The American death toll is among the worst in the world, with the country now approaching a total of 400,000 dead; if the US had the same death rate per million people as Canada, over 230,000 more Americans would likely be alive today.

The vaccine is America’s — and the world’s — chance at fixing this mess. Experts say the country must vaccinate at least 70 percent of its population, and possibly more, to reach herd immunity and protect a sufficient amount of the population from the virus. Only then can outbreaks truly be curbed.

But the US has been slow in rolling out a vaccine. The Trump administration overpromised and underdelivered: It promised 40 million doses and 20 million people vaccinated by the end of 2020; two weeks into 2021, only 31 million does have been delivered and just 11 million Americans have received at least the first dose of a vaccine, according to federal data. The country is currently not on track to reach 70-plus percent vaccination rates by the end of the summer.

Biden’s immediate challenge is fixing this mess, vowing to get 100 million vaccine doses delivered in his first 100 days in office. His presidency will count on it — his handling of the country’s most pressing crisis will likely be what Americans judge him on over the next year.

More seriously, it’s a matter of life or death: With thousands of people dying each day, ending the epidemic in the US even days or weeks earlier than otherwise could save up to tens or hundreds of thousands of lives.

Here’s how Biden plans to do it.

What Biden’s vaccine plan does

Biden promises to leverage “the full strength of the federal government,” in partnership with state, local, and private organizations, for a truly national vaccine plan. You can read the full proposal here, but here are some of the key points:

All of that is on top of Biden’s broader Covid-19 plan, which promises $400 billion more funds to combat the coronavirus and, specifically, $20 billion more for vaccine efforts.

Biden’s plan hits many of the marks that I’ve heard from experts over the past few weeks as I’ve asked them about what’s going wrong with America’s vaccine rollout.

First, the plan has clear goals to address what supply chain experts call the “last mile” — the path vaccines take from storage to injection in patients — by making sure there’s enough staff, infrastructure, and planning to actually put shots in arms. Second, it takes steps to ensure that supply chain problems are fixed proactively — with careful monitoring and use of federal powers when needed to address bottlenecks. Last, but just as crucially, there’s a public education campaign to ensure that Americans actually want to get vaccinated when it’s their turn.

The question, of course, is if all of this can get implemented correctly. As the US response to Covid-19 has floundered, a key question has been how much of the failure is attributable just to Trump versus bigger systemic problems, like the country’s size and sprawl, fractured health care system, and fragmented federalist government.

There’s also the question of whether Biden can get congressional support needed for all these efforts. Democrats will control both houses of Congress. But more moderate wings of the party may scoff at the high price tag: Biden’s stimulus plan is estimated at $1.9 trillion and the Covid-19 plan alone (which is included in the bigger plan) at $400 billion. The cost of borrowing is low, and Biden argues that the risk right now is doing too little instead of too much, but it remains to be seen if he gets enough backing in Congress.

If he pulls it off, though, Biden has a chance to show how much of a difference true federal leadership can make — and show how much the previous administration failed by failing to embrace a larger role.

At the core of Biden’s plan is a posture of more federal involvement that Trump has resisted at every step throughout the Covid-19 crisis.

This was clear in Biden’s broader Covid-19 plan, too: The ideas in the proposal aren’t at all new. Experts have called for expanding testing, preparing for mass vaccination efforts, supporting schools, providing emergency paid leave, and much more in the past year. Biden himself proposed many of these things last March. You can see many of these ideas in article after article in Vox and elsewhere, dating back to early 2020.

The Trump administration declined more aggressive steps, repeatedly taking a stance that it wasn’t the federal government’s proper role to get hands-on with the Covid-19 response. With protective equipment, Trump resisted using the Defense Production Act to get more masks, gloves, and other gear to health care workers. On testing, the Trump administration left the bulk of the task to local, state, and private actors, describing the federal government as merely a “supplier of last resort.” On tracing, the administration never had anything resembling a plan to make sure the country could track down the sick or exposed and help them isolate or quarantine.

This kind of hands-off, leave-it-to-the-states attitude culminated in the messy vaccine rollout. While there are many factors contributing to America’s slow vaccine efforts — including the country’s size, sprawl, and fragmented health care system — a key contributor is the lack of federal involvement. In effect, the Trump administration purchased tens of millions of doses of the vaccines, shipped them to the states, and then left the states to figure out the rest.

When asked about the botched vaccine rollout, the Trump administration has stuck to its anti-federalist stance — arguing that it’s on states and localities to figure out how they can vaccinate more people. Brett Giroir, an administration leader on Covid-19 efforts, argued, “The federal government doesn’t invade Texas or Montana and provide shots to people.”

Characterizing greater federal support for Covid-19 efforts as a federal invasion is of course absurd, but it’s emblematic of the Trump administration’s approach to the crisis.

On vaccines, as with the coronavirus in general, Biden’s promise has long been that he’ll embrace a bigger role for the federal government. With his plan, Biden is putting some specific details to that end. The question now is if he can pull it off — if he gets the support he needs from Congress, and if the feds really can deliver what Biden has promised.

Amazon just posted record sales and profit in the middle of a pandemic
New York has 12 times as many coronavirus deaths as California
What the Ring hacks tell us about tech’s backward approach to security
College football players are taking a stand against racism — and taking a big risk
The likely $1,200 coronavirus checks, explained
Trump’s Iran war has begun