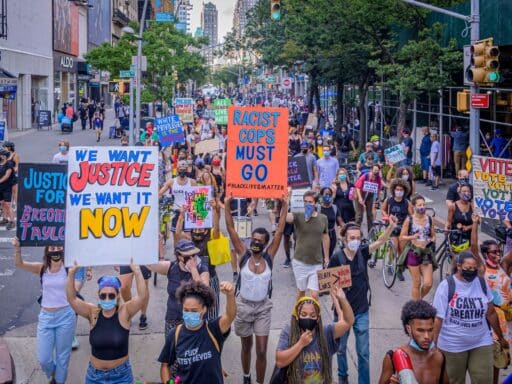 The president intends to overturn Trump’s 1776 Commission and study how federal agencies contribute to inequality.

Before taking office, President Joe Biden promised that racial justice would be one of the four “compounding crises” he’d tackle in his first days on the job. And on January 26, Biden will take action on a number of measures designed to bolster fairness and justice, including repealing the Trump administration’s 1776 Commission, which sought to downplay the role of slavery in American history, among other revisionist efforts, and examining how federal agencies promote and foster inequality along racial lines.

Biden’s equity platform states that while equal opportunity is America’s foundation, systemic racism — laws, policies, and institutions — prevents many Americans from reaching this ideal. This very fact is illustrated by the coronavirus pandemic, which has decimated Black and Indigenous communities by taking their lives at a disproportionate rate and leaving many in those communities unemployed or at greater risk of infection due to their positions as essential workers.

According to the order for advancing racial equity and support for underserved communities, Biden wants to pursue a “comprehensive approach to advancing equity for all, including people of color and others who have been historically underserved, marginalized, and adversely affected by persistent poverty and inequality.”

Biden’s early attention to equity comes at a time when social justice advocates are calling on elected officials to directly address systemic racism as it manifests in policing, education, health, housing, the environment, and the economy through policy — not simply conduct reviews and offer thoughts on the need for unity. In 2020, millions of Americans protested the police killings of Black Americans like Breonna Taylor and George Floyd. While Biden’s executive order suggests that equity is top of mind, activists say they’re aware that they’ll need to put pressure on the administration to set the agenda and bring continued urgency.

“No set of executive orders is going to revoke structural oppression,” Maurice Mitchell, national director of the Working Families Party and an organizer with the Movement for Black Lives and the Frontline, told Vox. “Historically, whenever this country made major gains around racial justice and equity, it was because social movements led the government. Significant movement around racial justice and equity has never come from the White House. As we don’t anticipate that to happen this time, our social movement has a critical role to play in all of this.”

Biden will emphasize his commitment to equity by rolling back two signature orders that the Trump administration implemented last fall that rejected the role of systemic racism in America.

The first of those orders, “Combating Race and Sex Stereotyping,” barred federal agencies from conducting workplace training that “inculcates in its employees any form of race or sex stereotyping or any form of race or sex scapegoating.” The order boiled down to a ban on any diversity training that informed employees about racism or helped them become aware of their implicit biases. Trump’s order also rejected critical race theory, the foundation of these trainings that moved scholars and activists to recognize how racism is endemic to American life.

Anti-bias training for federal employees has traditionally helped reduce the negative impact of implicit and explicit bias and ultimately improves the efficiency of various agencies, one report from the Obama White House noted. During Obama’s administration, the Office of Personnel Management developed a course called “Micro-Behaviors: Understanding the Power of the Unconscious Mind” and trained more than 10,000 federal employees on the impacts of implicit bias.

Biden will also rescind the order that established the 1776 Commission, a panel of historians organized by Trump to counter what students were being taught in school about slavery and America’s founding. The commission, named after the year the Declaration of Independence was signed, was a response to the New York Times’s 1619 Project — harking to the year enslaved people from West Africa were first brought to America — which centers slavery as the American story that defines social inequality and explains the country’s economic origins.

Since the 1619 Project’s release in 2019, educators have used the project as an instructional tool that stands up against the whitewashed American history contained in textbooks. The 1776 Commission wanted to keep school curricula free of information that regarded the founders as people who were interested in maintaining the institution of slavery, for example. The 1776 Commission released a 45-page report on Martin Luther King Jr. Day outlining its version of American history, but it vanished from the White House website two days later, on Biden’s Inauguration Day.

In his executive order, Biden gives federal agencies 60 days to terminate any actions related to Trump’s orders, including reversing any steps they took to end anti-bias training.

Biden’s order instructs every federal agency — there are more than 400 of them — to take no more than 200 days (mid-August) to complete an equity assessment to determine how that particular agency has potentially blocked underserved communities from receiving benefits and opportunities. The study will also examine the resources available to offices responsible for advancing civil rights. Based on the results of these assessments, the administration, particularly the Office of Management and Budget, will allocate funding to increase investment in underserved communities.

Biden has put the Domestic Policy Council, headed by Susan E. Rice, in charge of the effort to study systemic inequality and determine the communities that the federal government has historically underserved. This same body will also develop the policies that will advance equity in the next four years.

The administration cited a few examples of challenges it could address, like “closing gaps in wages, housing credit, lending opportunities and access to higher education,” but did not specify what areas it plans to address first.

Biden also plans to establish a working group on data to disaggregate information according to categories like race, ethnicity, gender, disability, income, and veteran status. For economists, scholars, and activists, this categorial breakdown allows them to better understand how policies impact particular groups of people. It’s impossible to advocate for change if there isn’t enough information on the problem. “This lack of data has cascading effects and impedes efforts to measure and advance equity,” the order states.

Other orders expected to come on Tuesday: Creation of a policing commission, disavowing discrimination against Asian Americans

The Biden administration also plans to roll out other executive actions on racial equity, according to the Hill, but no further information has been released by the administration at this time. These include:

Biden made his interest in challenging racism clear during his first address to the nation on Inauguration Day, when he named white supremacy, domestic terrorism, and political extremism as threats.

“He’s shining a spotlight on equity and racial justice early on, and that’s a good thing,” Mitchell told Vox. “Presidents have the most political capital early in their career, and the things they do early send a signal about what they’ll do for the rest of their term.”

In his inaugural address, Biden also noted that it will take more than words to fix the country — it will take unity, a concept he has invoked often in the past year, including when unrest broke out in Kenosha, Wisconsin, following the police shooting of Jacob Blake and when a pro-Trump mob ransacked the Capitol on January 6.

According to Mitchell, justice is Covid-19 relief in the form of $2,000 cash payments, or dismantling white supremacy, for example, not unifying with those who aided and abetted an insurrection at the Capitol. “I am cautious when I hear ‘unity’ and ‘bipartisanship’ without clarity on the destination,” Mitchell said.

Moreover, Mitchell is waiting to see how federal agencies, regulatory authorities, and Congress operationalize the administration’s racial justice agenda, ensuring that social justice for Black communities doesn’t get narrowly compartmentalized in the criminal justice realm but also extends to jobs, housing, health, and more. “We anticipate that our movement will have to fill in the blanks and create a political urgency so that the political class can do what’s necessary.”

Mitchell backs the policy positions enumerated in the BREATHE Act, which was created by the Black Lives Matter Global Network Foundation and the Movement for Black Lives and introduced in Congress last fall. The act advocates for specific measures like divesting federal resources from policing and the prison system and investing those funds in community safety and the self-determination of Black communities.

Mitchell understands the work will take time but the urgency doesn’t end. “Black folks have been waiting since we came to this continent, so a minute more is too much for us.”

Biden’s executive action states that more communication is necessary to achieve racial justice — and his team will have to actually listen to the voters of color across the country who helped elevate him to the country’s highest office.

Vox Sentences: Switzerland’s women are on strike
How reality TV shows cast the right people
How a major oil pipeline got held for ransom
Michael Cohen now wants to get out the vote
This week in TikTok: When Walmart and Amazon employees go viral
Biden calls for Trump’s Supreme Court nominee to be withdrawn if he wins the election