Cartier lost a trademark battle over the word “love” 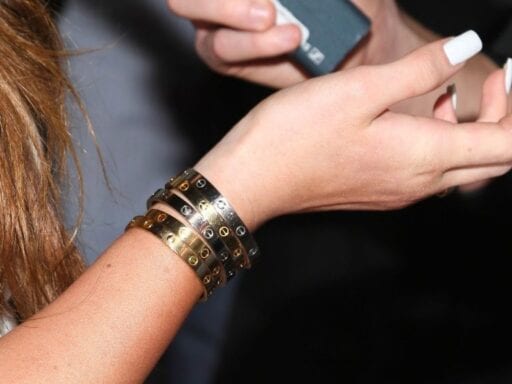 The luxury accessories brand tried to make the case that its iconic bracelets gave it ownership of the word “love.”

The French accessories brand Cartier is known for lots of things: as a historic jeweler to royalty, as a purveyor of uber-expensive fragrances, and as a designer of covetable luxury products, like its Tank watch and its panther-branded jewelry.

What Cartier does not have exclusive ownership over, though, is the word “love.” That was made clear in late December when a court in Singapore shot down Cartier’s attempts to stop another jewelry brand from trademarking a branding slogan with the word in it.

In 2017, a chain of jewelry and pawn shops called MoneyMax, with locations across Malaysia and Singapore, filed to register the slogan “Love Gold” as a trademark in Singapore. MoneyMax intended to stamp this label on its jewelry and use it for marketing and advertising, according to the Singaporean newspaper the Strait Times. Cartier filed a counterclaim trying to get the trademark application dismissed. It insisted the term “Love Gold” was too close to the branding of its Love bracelet collection.

The bracelet, which was designed in 1969 and starts at $6,300, was inspired by the mechanics of a chastity belt; it can only be opened and closed with a tiny Cartier screwdriver. The company has had a trademark on the “overall configuration” of the bracelet’s mechanics since 1977. It also owns the trademark of the bracelet’s design, known as a trade dress, because it’s so instantly recognizable. The bangle has become a status symbol that’s been worn by famous figures like Elizabeth Taylor and Sophia Loren, as well as Kylie Jenner. And while Cartier also has a trademark on the word “love,” this only applies to the company’s stylized version, with thick horizontal lines through the letters O and E.

In shooting down Cartier’s claims to own the word, reps at Singapore’s Intellectual Property Office nearly scoffed at the request.

“Can anyone have a monopoly over love?” Mark Lim Fung Chian, the office’s principal assistant registrar of trademarks, wrote in the court’s decision. “‘Love’ is a word which is commonly used by jewelry traders and should not be monopolized by any trader. A Love Bracelet may represent a metaphorical shackle of a person’s loved one. The word ‘love,’ however, should be free for traders to incorporate into their trademarks for jewelry.”

Although claiming ownership over a word as pervasive as “love” could seem pretty egregious, Cartier is hardly the first brand to pull such a move: Silly brand trademark disputes happen all the time.

Remember NBC’s The Apprentice? In 2004, Donald Trump tried to trademark the phrase “You’re fired,” but experts ruled that it sounded too close to the board game You’re Hired. Victoria Beckham — the fashion designer, former Spice Girl, and wife to the world’s most marketable man — fought with a professional British soccer club, the Peterborough United Football Club, in 2002 over its trademark of “Posh” since it was also her pop alias. The club won, arguing that it had been known as “the Posh” since the 1920s. (Perhaps not so coincidentally, the Beckhams trademarked the names of their children, Harper, Brooklyn, Romeo, and Cruz.)

Similarly, the yellow smiley face that Walmart deploys in its marketing was the subject of a dispute in 2006; the corporate giant wasn’t granted access because that smiley face is in the public domain. In 2017, General Mills’ Cheerios tried to trademark the color yellow, but a judge ruled the request wasn’t reasonable because it isn’t the only cereal brand that uses yellow packaging. That same year, Gene Simmons from Kiss tried to trademark the rock ’n’ roll devil horns hand symbol (he abandoned the process after he was widely criticized for trying to monetize the gesture). Last year, Procter & Gamble filed to trademark the acronyms LOL, WTF, NBD, and FML so it could use them for branding on Febreze and Mr. Clean products. (A court will decide on this later this month.)

2) Even w/ thumbs in, there’s another meaning

And ASL’s been here for hundreds of years https://t.co/NznTlq6zqr

Sorry, @genesimmons, Longhorns have been doing since the 50s — more than 20 years before KISS got going https://t.co/a4DF8ItizF

While plenty of trademark requests are rejected, others have been granted. Paris Hilton actually owns the trademark to the saying “That’s Hot” and successfully sued Hallmark for using it on a card. In 2009, Rachel Zoe trademarked “Bananas” and “I Die” as text on T-shirts in order to compete with another designer. Facebook somehow managed to trademark the word “face” in 2010, but only in conjunction with telecommunications services.

Fighting for a trademark brand makes sense when it protects an identity. Tiffany & Co. owns the trademark to its iconic Tiffany blue, under the argument that the use of such color by any other brand would confuse shoppers. McDonald’s owns the usage of Mc or Mac attached to any names, which makes sense because its branding is so universal. Cartier’s claims for something as generic as “love,” on the other hand, hardly seems to fit the criteria. Plus, Cartier has much bigger fish to fry: Its Love bracelet is constantly copied in the counterfeit industry.

The Supreme Court hands down very good news for pretty much everyone who uses a computer
Democrats’ impeachment dilemma, explained
The insidious cultural history of Kanye West’s slavery comments
The UK approved the Oxford/AstraZeneca Covid-19 vaccine. The US might not get it until April.
11 concrete steps the government can take to avert economic disaster
Will Ferrell and Julia Louis-Dreyfus were finishing each other’s sentences by the end of Downhill