Climate and energy news in 2018 actually wasn’t all bad 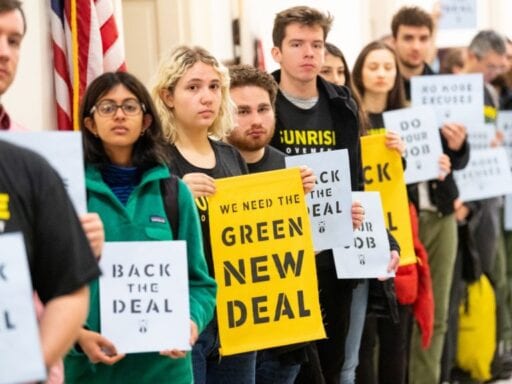 You might have thought the news about climate change in 2018 was all bad. And indeed, global greenhouse gas emissions reached a record high this year. The Intergovernmental Panel on Climate Change’s special report on limiting global warming to 1.5 degrees Celsius said we may have only until 2030 to avert catastrophic climate change.

There was also the Trump administration’s aggressive rollback of climate policies, including its efforts to replace Obama’s Clean Power Plan with a much weaker rule, freeze fuel economy rules for cars and light trucks, and lift greenhouse gas limits for coal plants. And let’s not forget all the signs of how dangerous climate change is for humans (think wildfires) and biodiversity (think the insect apocalypse).

Yet that’s not the whole story. In 2018, clean energy technologies also got bigger, better, and cheaper. The political will to fight climate change gained considerable momentum. And the business case for cutting greenhouse gases got stronger.

Voters are increasingly concerned about climate change. Public opinion shifted in 2018 in favor of regulating greenhouse gases, and 100 percent renewable energy goals became wildly popular. In the November midterm elections, several candidates for governor and congressional offices campaigned — and won — on their climate change bona fides. And activists began pushing representatives even further, demanding a comprehensive strategy — a Green New Deal — for decarbonizing the economy and making it fairer and more just.

Climate change is unquestionably a sprawling, incredibly urgent global problem, and the transition away from fossil fuels is the biggest challenge humanity has ever taken on. But our policies and our technological tools continue to improve. Here are some of the most encouraging trends of the year.

In 2018, we saw a wide range of new and established clean technologies being deployed. These tools — which are critical to reducing emissions from transportation, the power sector, and industry, as well as removing carbon from the atmosphere — keep getting better. And the tool chest itself is getting larger.

Clean tech is also getting cheaper

The big reasons these technologies are taking off are their declines in price. A major driver of price declines is economies of scale. And the reason there’s such large-scale demand is the price. See how that works? It’s a virtuous cycle.

Take a look at how solar power has taken off in the United States as prices have fallen:

In 2011, the US Department of Energy launched the SunShot Initiative. The goal was to lower the price of installing solar energy such that it can compete with conventional energy sources without subsidies. The program hit its target for utility-scale solar, 6 cents per kilowatt hour, three years ahead of schedule. The agency has now set an even more ambitious price target of 3 cents per kilowatt hour by 2030.

It’s a similar story with offshore wind, electric vehicle batteries, carbon capture, and so on as costs continue to fall faster than expected. And there’s no sign of these plummeting prices slowing down anytime soon. That means clean energy is increasingly competitive on its economic merits.

In Europe, major renewable energy projects are already starting to take root without direct subsidies. In the US, renewables are rapidly closing the gap with natural gas power plants despite low natural gas prices.

This demand for clean energy is now forcing utilities to respond. Some are trying to slow down the stampede. But Xcel Energy announced that it’s committed to going completely carbon-free by 2050 (and 80 percent carbon-free by 2030).

Polls show that while climate change isn’t usually a top-tier issue in the US, the policies for addressing it have broad support. Just check out the results from this August survey of 22,000 Americans by the Yale Program on Climate Change Communication.

That support is now increasingly being reflected in policies at the local and state level. In September, California Gov. Jerry Brown signed an executive order committing the state to the most ambitious climate target in history: total, economy-wide carbon neutrality and 100 percent use of zero-carbon electricity by 2045.

According to the Sierra Club, more than 90 cities, 10 counties, and two states have set targets for 100 percent renewable energy. That includes cities ranging from Berkeley, California, to Boulder, Colorado, to Cincinnati, Ohio, to Concord, New Hampshire.

Several candidates in the 2018 midterm elections ran on clean energy ambitions. Democrat Steve Sisolak won the governorship of Nevada after announcing his support of a ballot initiative that would mandate Nevada use 50 percent renewable energy by 2030. “In fact, as governor, I would like to get us on the road to 100 percent,” Sisolak said in a campaign video.

Some of the Republicans that did support policies to address climate change, like a carbon tax, lost their seats in the election. But the more recalcitrant members of Congress that held their seats are finding it harder to wave away climate change.

.@SenJohnBarrasso: 3 truths in making progress to lower carbon dioxide emissions: The climate is changing & we have a responsibility to do something about it, the world will continue to rely on affordable fossil fuels, & innovation is the ultimate solution https://t.co/B6LmkW4Bgv

Oil giant Exxon Mobil also launched a lobbying initiative this year to advance the case for a carbon tax. Behind the scenes, Shell lent its weight to a carbon tax proposal too.

Environmental activists also began mobilizing this year around a Green New Deal. (You can read the full explainer here.) The contours of the proposal will be under discussion for some time, but in essence, it demands a major government-led investment program in clean energy to cut greenhouse gas emissions while creating a vastly larger energy employment sector. It’s become a new progressive shibboleth, alongside Medicare-for-all.

While federal action on climate change is unlikely anytime soon, even the president of the United States can’t dodge the question.

Trump spoke about forest management, deflecting a question about whether or not climate change played a role in recent wildfires https://t.co/HpzidwUEug pic.twitter.com/UQKtNUVaPm

Make no mistake: We do still need much more federal, state, local, and private action on climate change, and on a vastly larger scale than anything we’ve seen to date. Policy is essential to the development and deployment of clean energy, and we need stiffer mandates for emissions reductions and the clean energy transition from every level of government. According to the Intergovernmental Panel on Climate Change, there’s “no documented historic precedent” for the global economic and social changes required to limit warming to below 2 degrees Celsius.

What we accomplished in 2018 is nowhere near enough, but it’s not nothing. We have a better sense of our climate goals, we have a pretty good idea of what it would take to meet them, and we have some momentum. The challenge now is building the global will to launch ourselves further and faster than ever toward a future without carbon emissions.