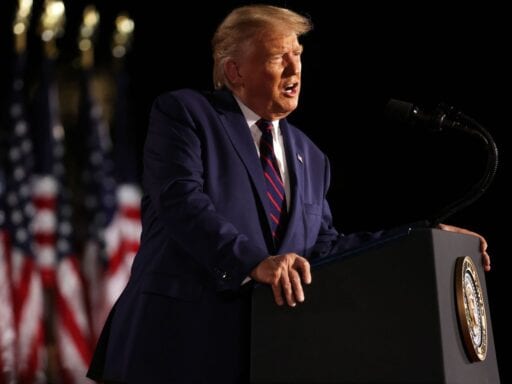 President Donald Trump on Thursday spoke for more than an hour at the Republican National Convention — giving him plenty of time to try to spin his presidency’s record positively and, it turns out, get a lot of things wrong.

CNN reporter Daniel Dale, who’s made a name for himself for fact-checking Trump, went on the network with a preliminary fact-check of the president — counting more than 20 false or misleading claims in Trump’s RNC speech, which would amount to one false or misleading claim about every three minutes. Dale proceeded to list those errors on the air, which took three minutes:

Quite the fact check from @ddale8 of Trump’s speech. pic.twitter.com/8fITOfExta

“This president is a serial liar, and he serially lied tonight,” Dale said.

Here’s the full list of errors, as recited by Dale:

It’s quite the list, but this level of lying and misleading isn’t new to Trump. According to the Washington Post, Trump has now made more than 20,000 false or misleading claims since he assumed office.

As my colleague Matt Yglesias has argued, there’s something more to this than just lying — it’s bullshitting. Here’s a passage from Princeton University philosophy professor Harry Frankfurt, explaining the concept:

For the bullshitter, however, all these bets are off: he is neither on the side of the true nor on the side of the false. His eye is not on the facts at all, as the eyes of the honest man and of the liar are, except insofar as they may be pertinent to his interest in getting away with what he says. He does not care whether the things he says describe reality correctly. He just picks them out, or makes them up, to suit his purpose.

It’s not just that Trump is lying. It’s that Trump doesn’t seem to care at all for the truth. What he says is only meant to make him look good. That’s the context in which Trump claims time and time again that he’s passed laws he never passed and built border walls he never built.

And so when the president speaks, it’s perpetually difficult to say if he’s telling the truth or merely reciting self-serving bullshit.

British protesters want Green Day’s “American Idiot” to top the charts for Trump’s visit
Knowing why we age could help us learn how to live forever. Do we want to?
Netflix’s Atlantics is a gorgeous, angry romance set in Senegal
New brand, same culture. Wells Fargo workers say the company is still toxic
4 primary races to watch in Pennsylvania
The Netherlands has universal health insurance — and it’s all private