Controversy over Rep. Ilhan Omar’s PTSD comments reveals how the disorder is misunderstood 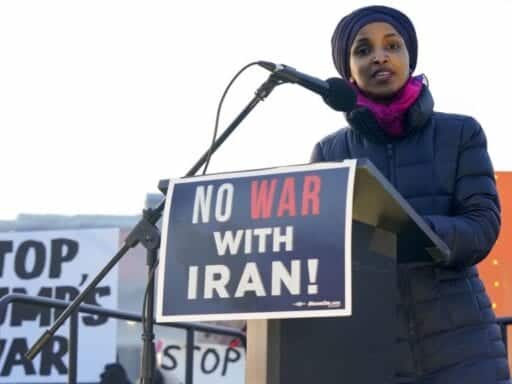 Share
Loading...
Rep. Ilhan Omar (D-MN) speaks during the “No War With Iran” rally at the US Capitol on January 9, 2020, in Washington, DC. | Leigh Vogel/Getty Images for MoveOn.org

It’s not just veterans who experience the condition.

Rep. Ilhan Omar (D-MN) fled civil war in Somalia when she was 8 years old, then spent four years in a refugee camp in Kenya. As a result, she says, she has post-traumatic stress disorder as an adult.

But when she mentioned the condition publicly this week in the context of conflict between the US and Iran, she got pushback from a Republican member of Congress.

During a press conference on Iran Wednesday evening, Omar said that, “every time I hear conversations around war, I find myself being stricken with PTSD.”

Conservatives were quick to criticize the statement, with Rep. Jim Banks (R-IN), who served in Afghanistan, tweeting that her comment was “offensive to our nation’s veterans.”

Rep. Ilhan Omar complained she’s “stricken with PTSD” because of recent events in the Middle East.

This is a disgrace and offensive to our nation’s veterans who really do have PTSD after putting their life on the line to keep America safe. pic.twitter.com/twhZDuUDu0

But psychology experts as well as some veterans say Banks’s remarks are based on a misconception about PTSD, a mental health condition that can cause flashbacks, insomnia, nightmares, and other distressing symptoms. Though it was long associated with soldiers coming home from war, PTSD is also common among children and other civilians who live through war, as well as people who experience sexual assault and other forms of violence.

Syrian refugees living in the United States, for example, have rates of PTSD comparable with those among Vietnam veterans, Arash Javanbakht, a psychiatrist and trauma specialist who has worked with refugees, told Vox.

In a response to Banks, Omar also pointed to the prevalence of PTSD among civilians who have lived through war, tweeting that “I survived war as a child and deal with post-traumatic stress disorder—much like many who have served or lived through war.”

I survived war as a child and deal with post-traumatic stress disorder—much like many who have served or lived through war.

It’s shameful that you as a member of Congress would erase the PTSD of survivors. pic.twitter.com/QdDBKDSOCS

Omar later added that the trauma of war is felt not just by veterans, but by “the child huddled under the bed as bombs go off outside her window.”

“I am that child and here in Congress I will always speak out against war,” she tweeted.

Banks’s criticism aside, experts say Omar’s openness could help destigmatize a condition that is unfortunately common, but is often misunderstood.

“PTSD is not owned by one particular group,” Elizabeth Carll, a psychologist and the chair of the American Psychological Association’s Refugee Mental Health Resource Network, told Vox. “It can happen to anybody.”

PTSD affects veterans — and many others

Post-traumatic stress disorder was added to the Diagnostic and Statistical Manual of Mental Disorders (DSM), sometimes called the “bible of psychiatry,” in 1980. At that time, it was primarily associated with veterans dealing with the trauma of serving in war. But in the ’90s and 2000s, public understanding of the disorder began to broaden, thanks to a surge of research and news coverage of the emotional aftermath of events from domestic violence to school shootings, Carll said.

Today, the DSM defines PTSD as a condition that can occur in response to “exposure to actual or threatened death, serious injury, or sexual violence.” In addition to nightmares and flashbacks, the disorder can also cause people to avoid anything that reminds them of the trauma, Javanbakht said. People with PTSD also often develop depression as well.

PTSD is unfortunately common — around 8 percent of the US population lives with the disorder, Javanbakht said. Rates are much higher among combat veterans, with around 30 percent of soldiers who served in Vietnam developing the condition over the course of their lives. They are also very high among refugees, who “are exposed to a lot of trauma and stress in a cumulative way,” he explained.

The Syrian refugees he’s worked with, for example, had their lives suddenly upended by war: “one day, they wake up with an explosion,” Javanbakht said. Living in a war zone, many had no access to food or electricity, and some may have seen neighbors and family members killed or kidnapped. Those who were lucky enough to escape with their lives still had to leave behind everything they knew to go to a crowded, high-stress refugee camp for several years, and then perhaps to a foreign country like the US, where they were unfamiliar with the culture and forced to live in poverty.

It’s not surprising, Javanbakht said, that people who live through such circumstances would experience psychological effects. In one study, he and other researchers found that almost one third of Syrian refugees met criteria for a possible PTSD diagnosis.

War isn’t the only cause of PTSD, experts point out. Sexual assault can also cause the condition — 50 percent of women who have been sexually assaulted will develop PTSD at some point in their lives, and it’s the most common cause of the disorder among women.

Other traumatic events, like plane crashes or natural disasters, can also lead to the disorder. “It’s really the individual’s perception of a life threatening situation” that can cause PTSD, Carll said.

When someone has PTSD, symptoms like flashbacks can be triggered by anything that reminds them of the traumatic event. For a veteran, for example, “a tire may explode near them,” Javanbakht said, “and then they hear the noises of the war.”

As in Omar’s case, news coverage or other discussions of war may also be a trigger. For some patients, Javanbakht recommends reducing how much news they watch for this reason.

The triggers, symptoms, and causes of PTSD may be better understood than they were in 1980, but misinformation and stigma remain.

Call the medic! @IlhanMN says she feels “ill a little bit” with all this talk of conflict with Iran. Well, I’m sure her dismissive talk of al Qaeda and 9/11 made a lot of Americans feel way more ill (and angry). https://t.co/JGaKAeonCt

But others came to Omar’s defense. The veterans’ group Common Defense, for example, called Banks’s criticism “tremendously ignorant,” adding that “veterans like us know that people wearing uniforms aren’t the only ones impacted by war.”

This is a tremendously ignorant thing to say.

Veterans like us know that people wearing uniforms aren’t the only ones impacted by war.@Ilhan is a refugee. We stand with her against hawkish elites like you. #VetsForIlhan #EndForeverWar https://t.co/oIE3iWZGK9

“Trauma is not a factor of weakness,” Javanbakht said. “Trauma can break down every and anybody.”

But Omar’s example is also a reminder that people with PTSD can still lead fulfilling and productive lives — including serving in Congress.

With treatment, which can include therapy and medication, “a lot of times we can totally manage the symptoms or even cure the condition,” Javanbakht said.

As Carll put it, “it’s not something that’s irreparable.”