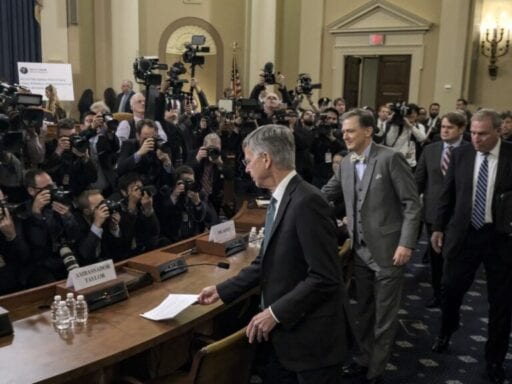 Outlets should know better by now than comparing politics to reality TV. Alas.

The first public impeachment hearing on Wednesday featured testimony from two State Department officials, Bill Taylor and George Kent, who detailed why they concluded that President Donald Trump’s Ukraine policy was not about the national interest, but about digging up dirt on his political opponents. It also included a new revelation about a July phone call involving Trump that indicated just how focused the president was on cajoling the Ukrainian government into undertaking politically beneficial investigations.

The proceedings got to the very core of what the office of the presidency is supposed to be about in our country. It was the stuff of history. But to hear Reuters and NBC tell it, one of the major faults of the hearing was that it simply lacked pizzazz.

Both outlets were roundly dragged for posting news analysis stories that focused on the entertainment value (or purported lack thereof) of the hearing. NBC’s piece, authored by Jonathan Allen, claimed that the hearing “lacked the pizazz necessary to capture public attention” — a turn of phrase that quickly became a meme and echoed the talking points Trump family members and administration officials used.

Meanwhile, Reuters’ Jeff Mason and Patricia Zengerle wrote that the hearing was “dull” and lacked “bang.”

“Democratic lawmakers tried their hand at reality television with mixed results on Wednesday as they presented arguments to the American public for the impeachment of a former star of the genre, Donald Trump,” it said. (In a similar vein, NBC’s piece said the hearing “felt more like the dress rehearsal for a serious one-act play than the opening night of a hit Broadway musical.”)

That sort of framing isn’t just a self-fulfilling analysis signaling to prospective news consumers that they can safely tune out the unexciting impeachment hearings. It’s also, as anyone who remembers lengthy cable news shots of Trump’s empty podium can attest, the exact sort of fixation on entertainment and optics over substance that played a key role in helping Trump win in 2016 in the first place. But if you hoped that major outlets learned something from that experience, the framing of the NBC and Reuters dispatches about the first public impeachment hearing was disappointing.

Fox News’s coverage, predictably, was even worse. While some of its programming also focused on how purportedly boring the first hearing was, Hannity guest and Trump favorite Mark Levin trashed Kent and Taylor as “two homeless guys.” Not to be outdone, a guest on Tucker Carlson’s show — former State Department adviser Christian Whiton — said Kent and Taylor “looked like people who sat by themselves at recess.”

These deflections and ad hominem attacks illustrate a dynamic that was also on display during Wednesday’s hearing: Trump’s Republican defenders are having a hard time coming up with a coherent defense of his conduct. Instead, when they’re not demeaning the messengers, they’re pushing conspiracy theories and turning reality on its head by trying to portray Trump as a principled opponent of corruption.

Wednesday’s relatively orderly proceedings may not have made compelling television the way Corey Lewandowski’s trainwreck hearing in September did, but it nonetheless revealed a great deal not only about how Trump views the office of the presidency but also about how ill-equipped his Republican backers are to defend him. Politics is not supposed to be a reality show, despite what Reuters and company would have you believe.

The ratings of Wednesday’s hearing suggest the public found the proceedings to be more interesting than some DC journalists. According to Variety, “[t]he first day of the impeachment hearings against President Donald Trump drew over 13 million total viewers across the broadcast and news networks combined” — a number that doesn’t even include those who streamed it online. Meanwhile, one of the Democrats who is participating in the impeachment hearings, Rep. Eric Swalwell (D-CA), told reporters he’s sorry-not-sorry if people found it boring.

“Yeah, I’m sorry if, you know, we didn’t entertain them, but that wasn’t the goal for today,” Swalwell said, according to the HuffPost.

Trump’s shortlist of potential Supreme Court nominees, explained
6 months after a major public controversy, YouTube is changing its anti-harassment policies
Trump supporters’ last-ditch downtown DC election protests got off to a bleak start
How UB40 and “Red Red Wine” became part of the Kavanaugh news cycle
China and Australia are in a nasty diplomatic spat over a fake tweet — and real war crimes
The Paris climate agreement is at risk of falling apart in the 2020s