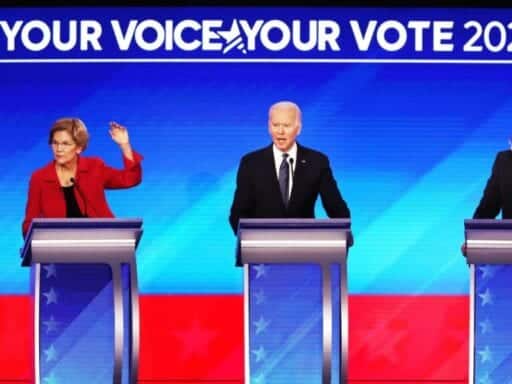 How do you get other countries to limit their emissions? Presidential contenders want to use trade agreements.

Democratic presidential contenders said they wanted to use trade to get other countries to act on climate change, but at the New Hampshire Democratic presidential primary debate on Friday, they were divided over the recent agreement between the US, Canada, and Mexico, the USMCA, signed by President Trump last month.

“The problem is, if we are going to deal with issues like climate change, not only do we in America have to take on the greed of the fossil fuel industry, we have to lead the entire world,” said Vermont Sen. Bernie Sanders. “But maybe, just maybe given the crisis of climate change, the world can understand that instead of spending $1.8 trillion a year collectively on weapons of destruction designed to kill each other, maybe we pool our resources and fight our common enemy, which is climate change.”

However, some candidates were willing to vote in favor of the USMCA even though it didn’t address climate change.

Climate change is obviously a global issue, and the United States bears a large responsibility for it: The country emits 15 percent of total current greenhouse gas emissions, and it’s the largest historical emitter of greenhouse gases. But climate change means zeroing out global emissions which in turn means that every country — including other major emitters like Saudi Arabia, Brazil, and China — has to take action.

The trouble is, it’s really, really hard to get every country in the world to act together on any issue, let alone a problem that stands to impact every sector of the economy — farming, transportation, electricity, housing, and so on. And countries can’t force each other to curb emissions. “This can only be solved with diplomacy and allies and interaction with other countries,” said billionaire investor Tom Steyer during the debate.

He said that the lucrative US market can serve as an incentive to get other countries to play by US climate rules.

Specifically, trade rules can be a useful way to address what’s known as leakage, where climate regulations in one country drive polluting industries to move to countries with weaker laws — where they can continue to pollute. It’s a concern that’s already shaping policies in other parts of the world. The European Union’s Green Deal also has a carbon tax on imports from countries with weaker climate regulations, which means it could potentially impact US exports to the EU.

But Warren voted in favor of the USMCA trade agreement. Sanders voted against it.

“What the environmental groups are saying, we’re simply exporting fossil fuel emissions to Mexico,” Sanders said. There’s not one word in that trade agreement that deals with climate change. And I don’t know how in 2020 you could do that.”

Minnesota Sen. Amy Klobuchar also voted in favor of USMCA and argued that having a trade agreement without climate change is still better than no agreement. “There were major improvements when it comes to labor inspections,” she said. “But I’m telling you right now, having no agreement puts us as such a disadvantage in dealing with China and pushing China to do better when it comes to climate change.”

She added that climate change would be part of a future trade agreement and that she would rejoin the Paris climate accords. But the goalposts under the Paris agreement are increasingly inadequate to limit climate change unless countries dramatically raise the ambition of their targets this year, as they are being implored to do. And rejoining the accord requires rebuilding trust with other countries after Trump’s disastrous decision to pull out. That’s a delicate diplomatic endeavor that requires skillful soft power to convince the rest of the world to take on aggressive cuts to greenhouse gas emissions.

And trade isn’t the only climate change foreign policy issue. A future president will have to tackle thorny questions like how to deal with refugees from climate-linked disasters and figuring out how to route money from the wealthy countries that contributed the most to climate change to the poorer countries that stand to suffer the most from it.

The debate was a good start, but candidates will need to lay out a more comprehensive international agenda if they want the US to lead and the rest of the world to follow on climate change.

Read the full transcript of the Helsinki press conference
The sordid history of housing discrimination in America
Labor Secretary Acosta has no good answer for the cushy Jeffrey Epstein plea deal
Prosecutor: Roger Stone lied because “the truth looked bad for Donald Trump”
Melania Trump finally gave an explanation for her “I don’t really care. Do U?” jacket
Trump will reunite separated families — but only if they agree to deportation