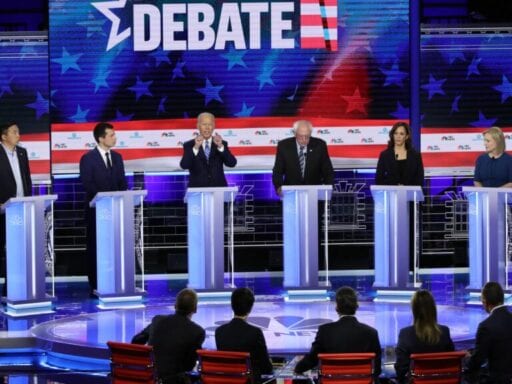 Share
Loading...
The top 10 Democratic presidential candidates will be on stage together for the first time during the third debate. | Drew Angerer/Getty Images

Biden is still leading overall. But Sanders and Warren are showing strong numbers.

On Thursday night, the third Democratic debate will be the first to put all the major Democratic candidates on one stage together. But among the 10 candidates, only three have been consistently registering frontrunner status in the polls: Former Vice President Joe Biden, Sen. Bernie Sanders, and Sen. Elizabeth Warren,

And that’s been pretty consistent for several months now.

Between the two rounds — and four nights — of debates, there have been a lot of break out moments for those three and some of the other seven candidates who will be on stage Thursday (Sen. Kamala Harris, South Bend, Indiana, Mayor Pete Buttigieg, entrepreneur Andrew Yang, Sen. Cory Booker, former Rep. Beto O’Rourke, Sen. Amy Klobuchar, and former US housing secretary Julián Castro).

There was the time Harris took Biden to task over his comments about working with southern Democratic segregationists in the Senate. Booker tried to have a repeat viral moment over Biden’s criminal justice record in the second debate. O’Rourke surprised everyone by whipping out some broken Spanish. Sanders found a catch phrase when pushed back on criticism on his signature proposal, the Medicare for All Act, by declaring he wrote the “damn” bill. Or Warren asked why moderate John Delaney even bothered to run for president.

But these moments haven’t really changed the fundamental polling outcomes going into Thursday:

There have been ongoing trends that are worth keeping a close eye on. Warren’s upward trajectory in polling continues. Sanders, meanwhile has remained pretty stable, while showing some good showings in early state polls. And there are a lot of undecided voters among key demographics that could make or break these candidates chances.

Recent polls all seem to paint a similar picture.

Biden is winning overall. Going into this week, an ABC/Washington Post from September 2-5, found Biden with 27 percent of the vote, Sanders with 19 percent and Warren with 17 percent. None of the other candidates registered double digits. Biden was overwhelmingly seen as the most electable candidate against Trump in that poll. A CNN poll during the same time found similar results: Biden at 24 percent, and Warren and Sanders at 18 and 17 percent respectively.

That’s consistent with the polling averages overall, that puts Biden at roughly 28 percent of national support — roughly 10 points ahead of the rest of the field. Compared to the very beginning of his campaign, when he was polling in the low 40s, Biden’s clout in the field has dropped substantially, but he’s remained a stable lead throughout the summer. The exception is in South Carolina, where Biden has 43 percent of the support — a full 25 points ahead of second-place Sanders, according to the most recent late August, early September YouGov poll.

Biden has been put on the defensive throughout the primary cycle as candidates across the ideological spectrum have attacked his record and past comments. Some of these moments have affected Biden’s poll numbers — he took a dip after Harris publicly called him out for his position on school busing in the 1970s — but he’s always bounced back. And despite talking himself into a seemingly never ending “gaffe” news cycle, Biden remains in the lead.

That said, Biden’s frontrunner status isn’t going unchallenged. Sanders and Warren are also registering double digits in the polls and they’ve increasingly seen their strength come in state polls in Iowa, New Hampshire and Nevada. The Real Clear Politics polling average puts the two in a dead heat, as did an early September YouGov poll which saw Warren and Biden in a tie at 24 percent and Sanders behind at 17 percent.

A Franklin Pierce-Boston Globe New Hampshire poll this week, in fact, put Sanders up 7 points ahead of the rest of the field, with 29 percent of the vote. Biden came in second with 21 percent, followed by Warren (17 percent). Another YouGov New Hampshire poll from late August into early September put Warren ahead of the three, with 27 percent, with Sanders and Biden essentially tied for second and third. Sanders led the latest YouGov poll out of Nevada, another early state, by two points, with Biden and Warren trailing closely behind.

Sanders and Warren support similar policies and have occupied the most progressive flank of the Democratic party, but as Vox’s Andrew Prokop noted, they have had different trajectories in the race. Sanders, who had high name recognition going into this election from his 2016 run, has remained relatively stagnant in second place. Meanwhile, Warren has seen a steady rise.

There are a lot of undecided voters

About a quarter of the Democratic electorate is still undecided — a share of voters that hasn’t substantially shrunk since April, when Biden first jumped in.

Poll after poll has shown that Democratic voters are more willing to pick a candidate that they think will win against Donald Trump than a candidate they are more ideologically aligned to. In other words, electability matters to Democrats this election cycle, a lot.

The good news for the candidates in the Democratic field is that in hypothetical match-ups, Trump loses to almost all of them. As Vox’s Sean Collins pointed out, a September 10 New Hampshire Emerson poll even found entrepreneur Yang — who hasn’t substantially topped 2 percent of support — defeating Trump comfortably. The ABC-Washington Post poll found Biden, Warren, Sanders, and Harris beating Trump by double-digit margins. But that doesn’t always match up with voters’ perceptions.

The number of undecided voters could have interesting implications for some of the top candidates, particularly in demographics that represent a core part of the Democratic base. For example, an Essence poll of black women found while older generations primarily supported Biden, and younger black women supported Sanders, 26 percent were still undecided. In states like South Carolina, where black voters make up 60 percent of the Democratic base, that could make or break some candidate’s chances. Candidates like Warren who has struggled to shore up support among black voters so far.

Meanwhile, the rest of the field needs a break out moment that will actually stick.

Harris had some momentum after the first debate when she took on Biden. State polls in Iowa and South Carolina offered a little more light for Harris in July. She outpaced Warren and Sanders in a mid-July Monmouth poll of South Carolina voters and essentially tied with Warren in a YouGov poll of Iowa in July. But in national polls, that was a fleeting moment of electoral success, and in the past two months she’s slipped back solidly into fourth place.

Similarly, Buttigieg, who enjoyed a major media frenzy early on, hasn’t been able to substantially make a dent in the crowded field. And not far behind Harris and Buttigieg sit a tier of candidates, from Beto O’Rourke, to Cory Booker and Andrew Yang stuck at around 2 to three percent of the vote.

The debates, as always, give these candidates a chance to break out. But they’ll need to have a moment that actually sticks.

What we know about the potentially explosive letter Sen. Feinstein sent to the FBI about Brett Kavan...
US and Mexico reach an immigration agreement to avoid tariffs
Trump’s comments about the IG report turn reality on its head
Most courts closed due to coronavirus — but not those that serve high-risk populations
What a US-Iran war would look like
WandaVision’s disappointing finale and the problem with demanding “justice” in fiction